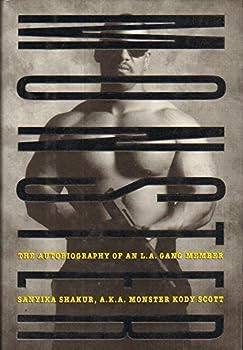 Monster: The Autobiography of an L.A. Gang Member

Written in solitary confinement, the author's memoir of 16 years as a gangbanger in Los Angeles makes palpable the despair and decay of America's inner cities and gives eloquent voice to one aspect of the black ghetto experience.

Published by Helluvannette , 2 years ago
This was def an interesting book. It followed the life of a Crip from the age of 11 until he became a man.

?Children gone wild in a concrete jungle of poverty and rage

Published by Thriftbooks.com User , 21 years ago
.....they are armed and dangerous". These words, written by an LA gang member who found his loyalty and respect on the streets as a Crip at the age of 11 years old. From the moment I started to read this book I felt like I was stepping into a parallel universe. A world where children riding ten speeds carry automatic weapons, and shoot down anyone who has dared to cross the line into their territory. They are Gang-Bangers and they live and die for their "Set" or gang. They come up in the ranks of the prison system like other children are oriented to boarding school and college.Monster Kody has arrived and he is true to his Set and a leader among men. He has known nothing but his militaristic way of life for as long as he can remember. He knows never to be caught on the streets of South Central without his weapon; to do so could be deadly. He stands point when he enters the supermarket with his mom, and shoots when a rival gang member is spotted in produce. This sounds like insanity, and it is, but that doesn't make it any less real. By the age of 19 Kody feels like he has aged beyond his years, and rightfully so. He has been at war for almost a decade. He realizes that he has to be a father to his children. He wants more for them, and he wants to break the cycle of New Afrikans killing New Afrikans. It is at this point that he decides to change his name and take on a new direction in life. Shakur is an intelligent individual that has much to offer. I was amazed by his insights and the words flowed along the page with ease. I usually don't care for books written with a lot of dialect, in this case street talk, but he did it in such a way that it enhanced the book. I hope you find your peace Sanyika and spread it among the people. You are surely capable of anything you set your mind out to do. Kelsana 6/25/01

Published by Thriftbooks.com User , 21 years ago
Everyone hears the rap music about gang life, but without living in the ghetto no one really know what it is all about. Kody Scott, a.k.a. Monster Kody, an ex Eight Tray Crip gang member gives a first hand story of what gives them their motive and an inside look of how gang life is. In music videos ghetto life is almost glorified. Monster explains all the struggles that come along and it is a way of life for most kids and teenagers growing up in South Central Los Angeles. After a long life experience of being a gang banger, Kody Scott turns his life around in jail to better himself and make others aware of the true side effects of gang life. This book gives an inside look about what real gang life in all about. Kody Scott goes in to great depth and vivid detail about his personal experiences as he changes from a gangster to an enlightener. Kody was initiated by the street hoodlum at the age of eleven and began his useless fighting against other "hoods" and gangs. Monster Kody became widely known for his ruthlessness and will to never give up. He was brutal and ferocious. He was always ready to go out and fight and kill his opponents. There was never any fear in his eyes and no stopping him. Not even his own mother could keep him in the house, he would just run out through his window in the wide frightening gang world that Monster Kody Scott had gotten himself deep into. There had been through so much. Not even the harshest things stopped or affected him at the time. He had seen it all: I'd had to open my eyes and ears to hear the sounds of clips being pushed in and weapons being cocked, screeching car tires, running feet, the hunted and the hunters, the sudden blasts of gunfire; to see the twisted, lifeless bodies, the wounded still trying to run or crawl, the yellow homicide tape being strung, the tears over a family's lack of funds for a proper burial, the drugs, the alcohol, the angry faces- this process, the way of life for so many, repeated itself over and over (p. 376). With violence like this it is hard to think there would be no feelings or emotions. People such as Kody Scott become cold and hard as stone. Nothing could surprise him and the so the life of a gangster continued to swallow him up. In South Central Los Angeles at this time a person was either in a gang for protection and family or on his own to fight things by himself. It was a way of life. This book portrayed murder and robbery as a way of life and a way to survive instead of a crime. These gang members were not afraid of the law or going to jail. Monster Kody was given a long sentence to a maximum-security cell. Members knew that if they were strong and true gang members that they would have to go to jail at least one time. If they didn't they felt that they weren't making any contribution and progress out on the streets. They started their gang violence in the jails as well. There was no remorse for their actions and there was always a feelings a

Slacked off at work, and ignored my girlfriend to read this

Published by Thriftbooks.com User , 22 years ago
I want to stress that this book is virtually impossible to putdown and thats why it got 5 stars from me. It is powerful, captivating, and well-written. However, unlike most other reviews I have read here I do not feel that Kody is a hero and certainly not a role model, in fact it is unclear just how radical or lasting his departure from the gang lifestyle really was and is. But I do not wish to belabor this point for it is not where the appeal of this book lies. What is great about this book is that if you see it in a bookstore and open it to any page at random and read so much as a sentence or so, I will almost gaurantee that the bookstore in which you are standing will be collecting the price of this book.. Kody's style is also impressive as one wonders where he gained education enough author such a well- written story. Although some of his points may be very clouded logically, the writting is always engrossing and insightful. Kody never sugar coats his tales and more importantly never comes off as if he is bragging. Bottom line, bought it on a wednesday night, 383 pages later it was thursday.

Published by Thriftbooks.com User , 23 years ago
I think every kid that is thinking or in a gang should read this book. Where I live There are not any gangs, though I know some bangers from nearby cities. Last year I was what you called a wanna-be banger. I had only seen movies and heard stories of what banging is like. As I matured I grew out of this phase. Though I still thought it would be cool to move to Boston or something and join a gang. After reading this extremly touching book I turned my head the other way and felt bad for kids that live in inner-cities that HAVE TO bang to survive. I feel that every young teen that thinks banging is cool should read this and see the trouble banging put Sanyika through. I personally would like to meet this legend and give him a lot of credit for coming out of jail and staying strong, and not banging. Read this book if it is the last thing you do on earth, it will make you change your mind tremendously and really make you think. This book has inspired me in so many ways.Sanyika, thank you.

one of our own tells how it really is to live a thugs life.

Published by Thriftbooks.com User , 23 years ago
I grew up in South Central Los Angeles and I heard stories from older homeboys in my hood about the notorious "Monster" Kody from Eight Tray. This book was painfull for me to read as it dug up my own personal memories from when I was living as a gang member in L.A. When I was younger I rolled with 18th street, now a 23 year old survivor and U.S. Marine I appreciate people like Sanyika Shakur. His story is that of thousands of young Black and Chicano males through out L.A. County. Look at life through a true gangbanger's point of view and read this book. I know you'll feel differently the next time you see grafitti or when you roll through the ghetto.
Trustpilot
Copyright © 2022 Thriftbooks.com Terms of Use | Privacy Policy | Do Not Sell or Share My Personal Information | Accessibility Statement
ThriftBooks® and the ThriftBooks® logo are registered trademarks of Thrift Books Global, LLC