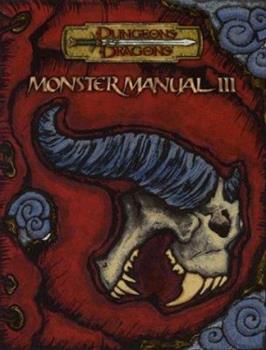 Describes the characteristics and attributes of a variety of monsters, zombies, demons, giants, werewolves, animals, and aliens for use in the Dungeons and Dragons game.

Published by Thriftbooks.com User , 13 years ago
I'm happy to say that I was very satisfied with this product. Though it's clear that the book has been opened, I was happy to find there were no highlights or stains or smudges of any kind as per noted. I enjoy using this book for my gaming needs and always thrilled that I have a book that I ordered online where there are no pages missing. There are many more monsters than I'd ever dreamed of in this book with a wide variety of type, terrain, and species. I'd be happy to buy more!

With this and the MM you are good to go.

Published by Thriftbooks.com User , 15 years ago
This book covers the holes in the Monster Manual. With these two books you are set for a solid D & D game. It is heavy on the Eberron and Forgotten Realms stuff though. If you have a lot of Eberron books you will probably feel a little gypped at the reuse of material.

Published by Thriftbooks.com User , 15 years ago
This is the best Monster Manual that I have seen yet. In fact, I reference it more in my games than the Monster Manual itself. This book has very inventive creatures. Here is a rundown of the contents: GOOD: Each monster takes up exactly one, two, or (in a few cases) three or four pages. This means that there is no page-flipping to get all the monster statistics. While some of the time this leaves empty room at the bottom of the page, it is only a few lines. Even when I'm not running an Eberron or Forgotten Realms campaign, I find the information on the monsters for those settings very nice to have. They give you ideas and adventure hooks that the rest of the description lacks. Every creature has a picture. While at first this seems true with all the Monster Manuals, it is not. I do not see a picture of a half-celestial in the Monster Manual, nor is there a black pudding (just why did they put a picture of the invisible stalker in the Monster Manual? You can even see the stalker in the picture!). Some creatures have `powerful' versions of them, such as is the case with the shadesteel golem, and the nycter. These really help a DM that uses high-level adventures and reduces preparation time. In addition, it has more subtypes of already-common creatures, including: two demons, four dinosaurs, one elemental, three giants, one gnoll, one goblin, seven golems, two lizardfolk, one ogre, one otyugh, two rakshasa, one roper, five trolls, and four yugoloths. Also, the statistics for changelings, shifters, and warforged are all presented from the Eberron Campaign Setting. The warforged entry (which is four pages long) includes two new types of warforged. Finally, a wide selection of creatures is presented, with all creature types. From undead swarms to aquatic vermin, this book has it all. BAD: Repetitive. This book is built to be usable (just not easily) without any other monster books. This means that it has a `reading the entries' section (four pages), monster feats (two pages, although there are two new feats), and a glossary (16 pages, although it has a few new entries). In the end, this book has 197 pages on monsters. Some creatures are weird. Not weird like `ephemeral swarm' or `feral yowler' weird, but `dread blossom swarm' (yes, it's in the book) and `susurrus' weird (the susurrus, by the way, is a silvery humanoid with holes in it and kills undead). Of course, it has the standard Wizards of the Coast errors scattered throughout the book (look at Monster Manual II, where it has `chapter title' instead of a monster name in one place... page 163). All in all, it is a solid book. DMs get to surprise players with nonstandard creatures (no more giant eagles and bulettes, no pixies or hydras, no mimics or purple worms, etc.).

Published by Thriftbooks.com User , 17 years ago
I just don't have the time that I used to, and my friends live all over, so I'm what you call a Holiday Gamer. I don't have all the feats memorized or monster strengths and weakness strategies fully understood. This makes it difficult as the DM for my campaign because we always reference play (look up stats during battle, consult a chart while exploring for secret passages) That's why this book deserves a 5 star rating from me. Not only does it include the basic charts, pictures etc. of the monsters, but it gives you example paragraphs to read to the players when the first encounter the beast. And secondly, most monsters, at least the difficult ones or spell casters, tell you a round by round strategy of how the monster fights, when it flees, when it watches, and how it gathers information about the party. For example : "you see a stern but regal looking head float above a shimmering humanoid body of a warrior. Streams of light show through cracks in its armor . . .etc etc." You get the point. From a strategy side, some of the difficult monsters tell you what spells they would be most likely to cast at various times during the combat : "He will likely do an invisibility purge round one to reveal hidden foes . . . round two he will cast chaos / confusion and repeat the same in round 3 . . . if any creatures remain unaffected by two rounds of confusion, he will target them first with his attack . . . and will use silence to nullify pesky spell casters . . . if both confusions fail to affect the party, he will cautiously retreat or plane shift if he gets in real trouble" That's the kind of assistance I need as Holiday gamer and that's what this book can offer that the first two Monster Manuals did not. These strategy guides help the Holiday Gamer insure that monsters encountered by the party get their full merit of challenge rating rather than just "wade in and attack". . . . Happy Gaming!!! PS : But the one thing I found disappointing : can you guess it? Come on try . . . . well here it is : THERE ARE NO NEW DRAGONS IN THIS MONSTER MANUAL! I know, I know, you can't have dragons in EVERY book but come on - - - it's dungeons and DRAGONS!

Published by Thriftbooks.com User , 17 years ago
The new monsters in the MM3 are pretty well done. They tend to be higher ECL than average but the creatures are interesting. They are creative and well though out to be fun to run an run up against (well challanging to run up against if not fun). Although I'm not finished going through it yet, so far it contains some of the most interesting critters of the 3 different monster manuals. Anyway, I have been pleasantly suprised by the quality of the content so far. Hopefully you'll like it as well.
Trustpilot
Copyright © 2022 Thriftbooks.com Terms of Use | Privacy Policy | Do Not Sell My Personal Information | Accessibility Statement
ThriftBooks® and the ThriftBooks® logo are registered trademarks of Thrift Books Global, LLC