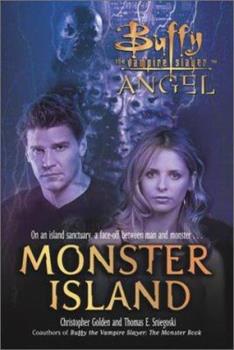 (Part of the Buffy the Vampire Slayer Series and Angel Series)

This description may be from another edition of this product. "You never know until you're tested." -- Doyle, "Hero" Since he arrived in Los Angeles, Angel's mission has been to help the helpless. He has saved countless innocents in his city. However, one...

Published by Thriftbooks.com User , 17 years ago
I whipped through this book in just a few days, despite it being over 400 pages long. It has non-stop action, great cliffhangers and it leaves you feeling breathless. I have to give the writers props for juggling so many characters. On top of the cast of Buffy (Buffy, Willow, Xander, Tara, Dawn, Giles, Anya, Spike) and the cast of Angel (Angel, Cordelia, Wesley, Fred, Gunn, Lorne) are a bunch of characters created just for the book. Even though there are so many people, it never feels crowded. On the contrary, it makes the book that much more exciting. Plus, the writers created characters have so much personality and background that they could easily have been a part of either series. I bought this book because I love both shows and because I enjoy reading the books. The idea of a giant cross over book was exciting. However, the back cover of the book is very misleading about the plot of the book. It basically sums up the first two chapters. Also, it was unclear when this book was supposed to be taking place. It was as if the writers couldn't decide when they wanted it to have happened. From the fact that Buffy has recently come back from Heaven, that Spike is in love with her, that Connor does not yet exist and that Wes is still a trusted member of the group, I figure that it is at the beginning of Buffy's sixth season ang therefore Angel's third season. However, there are problems with this knowledge. There were glaring errors in the timeline of both series. It is mentioned numerous times that Angel's gang had ALREADY met Tara. But Tara never came into contact with anyone on "Angel" (even Angel himself) while she was alive. There are many of these mistakes in the book. The last thing I'll mention is what another reviewer said about a page being missed. This is true. Page 367 is missing and page 368 is repeated. I hope this gets fixed in later printings. Overall, a great book!

Published by Thriftbooks.com User , 17 years ago
"Monster Island" is only the second book in the Buffy/Angel series of books to have been originally released in hardback. The only other one was the Buffy book, "Immortal". Why this is, I don't know, but I got the just released paperback. The tale is written by one of the premiere handlers of Buffy fiction, Christopher Golden. He co-wrote it with Thomas E. Sniegpski. One knows that the characters are going to be handled well and written for accordingly with Golden involved. This is a Buffy/Angel crossover novel, and the best one to do so so far. The story is large and quite epic. Someone, or something, is killing of half breed demons in Sunnydale at an alarming rate. A ways away in the City Of Angels, the same thing is happening there. Angel realizes that the connection strikes a lot closer to home and soon Buffy and her gang are in L.A. to fight alongside Angel and his compadres. The character of Doyle, who figured prominently in the first 8 episodes of "Angel", is part of the plot and it's a most welcome connection. The big finale takes place on a magical island filled with all sorts of races of demons. Buffy and the others must fight the great evil before thousands of half breeds are slaughtered. The meshing of the two worlds just runs smoothly here. It always does, but this one has almost everyone getting together, except for Giles, Anya, and Dawn. The characters are all written as they would be on the show by the most knowing of standards. There are demons galore here, and just may be one of the most demon packed series in the franchise. I can't tell you when it is placed, as in what seasons, because there is no information on that given. Buffy talks about being brought back from the dead, which would mean season 6. But there is a point in the book where Wesley says they had just broke Faith out of jail, which happened in season 4 of "Angel", which ran during season 7 of "Buffy", but there is no Connor, who was a regular member during season 4 of "Angel", and a couple characters visit the ruins of Sunnydale High, which was restored in season 7 of "Buffy", so who knows when it actually takes place. Did anyone follow that?. There's a number of things here and there that a Buffy/Angel fan would remember and get. Sure to put a smile on your face. The story is one of the strongest in the line of books, and is written solidly with a sharp eye for detail and characterization. Each individual series of books, Angel and Buffy, keep getting better and better. And when they crossover like this, it's just pure golden. Christopher, that is.

For Whom the Slayer Toils

Published by Thriftbooks.com User , 18 years ago
A music teacher of mine once observed that the greatest examples of each musical era come after the end of that era. While that is arguable, there is no question that 'Monster Island' is an outstanding example of Buffy literature coming out too late for it to be anything but a poignant reminder of our favorite vampire slayer.It is set in the time period after Buffy's final return from the dead, and before the onset of Willow's own difficulties. Not the best of times, but one of relative peace before things finally come completely apart. Also of interest is that Chris Golden and Tom Sniegoski have chosen to bring Buffy and Angel together in an unusual struggle. One in which the folk they are fighting to save are demons.It shouldn't be any surprise that demons are liable to the same social dysfunctions that humans fall victim to. In this case, the onset of a racial purity movement threatens the existence of demons of mixed (part human) heritage - as well as those who support them. In Sunnydale, a string of grim murders draws the Scooby gang into the nets of General Axtius, a Brachen demon who (oddly enough) was Doyle's father before he took up the flag of 'demonic cleansing.' Then Axtius shifts his focus to Los Angeles, where he is distracted from his cause by his efforts to wreak revenge on Angel, whom he blames for Doyle's death.Realizing that the problem is bigger than either her or Angel, Buffy comes to Los Angeles, where the join forces. Eventually traveling to a mysterious island where those demons who have come to value peace have set up a safe retreat. There they must make a last stand against the hordes of General Axtius.Golden and Sniegoski have proven themselves a powerful writing team of several occasions, but 'Monster Island' may be their finest hour. Not only is there a strong plot, but the character interaction - especially as the Sunnydale and Los Angeles contingents adjust to each other - is remarkable. The story underlines the changes all of the character have gone through, and provides interesting insights into some of the less character.Great plot, writing, characters, and the sweet bitterness of nostalgia for something that will never happen again. If you are ever going to read a Buffy book put this on your must read list.

Just great, could this be the movie script?

Published by Thriftbooks.com User , 18 years ago
This was a WONDERFUL crossover novel. Everyone except Giles and Dawn played a part (too bad about Giles). I could barely put it down. I was wondering how they would handle Buffy/Spike/Angel, but it was very well done. Lots of action, lots and lots of monsters, great character descriptions. Should have been much longer, it was so good. I just picked up Impressions, which was an earlier Angel novel, and am not enjoying it half as much. Angel novels are extremely uneven, from the ridiculous to the sublime. One needs to pay close attention to the author.

Published by Thriftbooks.com User , 18 years ago
MONSTER ISLAND proves there is power in collaboration. Here, we have two amazing authors, Christopher Golden and Thomas E. Sniegoski, join forces to tackle a Buffy the Vampire Slayer/Angel crossover of epic proportions.The novel has amazing character interaction. It met and exceeded my expectations for crossover meetings, be they reunions or first impressions. I especially enjoyed how well Fred and Tara got along. They almost instantly connect and their newfound friendship continues throughout the story while others comment on the wackiness that is them.The authors certainly did their research when it comes to the monsters that have been on both shows before. Many familiar faces or races of demons appeared. The descriptions of those who were established on the series are accurate; the details of the new breeds the writers invented are imaginative and creative.Anything with a wide array of characters, be it a book, a television series or a film, has to be handled very carefully so as not to confuse the readers and viewers. Golden and Sniegoski delicately balance the plotlines and give fan-favorite characters equal facetime. Not only do they incorporate the time-honored story of good versus evil, but they utilize issues that have been everpresent on both shows: ill-meaning father figures, abusive pasts, soul-searching, morality and mortality. The story is engaging and the final battle is tremendous. I highly recommend this novel to any and all fans of Buffy the Vampire Slayer and Angel. Two thumbs way up. Or, if you are a monster, two horns or two fangs up.
Copyright © 2020 Thriftbooks.com Terms of Use | Privacy Policy | Do Not Sell My Personal Information | Accessibility Statement
ThriftBooks® and the ThriftBooks® logo are registered trademarks of Thrift Books Global, LLC