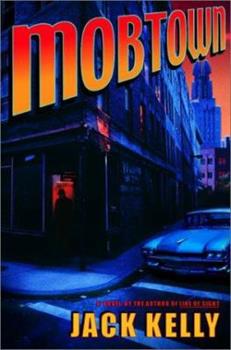 This new page-turner from the author of Line of Sight is packed with great writing, complex characters, a shocker of an ending, and a dose of pure attitude.Writing with the deft skill of Elmore Leonard and James Ellroy, but adding a hip, noirish twist all his own, Jack Kelly packs a punch in this new novel set in the deceptively quiet neighborhoods of 1950s Rochester, New York. Ike Van Savages latest case starts out simply enough: a threatening husband...

Published by Thriftbooks.com User , 15 years ago
What a thriller! I especially liked the historical and geographic references to Rochester and the surrounding area.

Published by Thriftbooks.com User , 19 years ago
Private detective Van Savage pays the bills doing divorce work--dependable work in 1950s Rochester N.Y. where infidelity is common and as the modern age is being born. When a beautiful woman walks into his office with a story about her husband, Savage thinks it's more of the same. When she tells him that her husband is trying to kill her, as he's killed two previous wives, Savage is curious. When he finds out that the husband is the major figure in Rochester's mob, he knows he's in trouble. Author Jack Kelly writes with a hard-hitting style that pays homage to the hard-boiled detectives of an earlier generation of mysteries while saying something fresh as well. His view of the 1950s as a time when the mob ruled, when honest cops were set up and destroyed, and when a day of hard work is followed by a night of hard drinking rings true. Savage is a sympathetic protagonist with family troubles and who just can't seem to stick to his own decision to keep his feelings out of what is going on. A couple of coincidences bring together Savage's cases in ways that strain but don't break credibility but otherwise MOBTOWN is a small gem.

Published by Thriftbooks.com User , 19 years ago
Mobtown is a totally fun ride. Colorful characters, a snappy plot, magnificent in it's detail of time and place. A richly painted film noir on paper. Read it.

Published by Thriftbooks.com User , 19 years ago
Jack Kelly's latest novel, Mobtown, is rock-solid noir, Mickey Spillane and Raymond Chandler style, or a like a Humphrey Bogart film. The characters are well defined, the setting is vivid and the mystery is like a giant jigsaw puzzle with pieces lying all over the place waiting to be fit together.A cop kicked off the force for having morals, Ike Van Savage turns private investigator working the city streets of Rochester, New York. He's hired by a woman who wants to find out if her husband is fooling around. An Irish man hires Van Savage to find out for sure who is setting fire to his slum-rental properties. A good looking dame has hired him afraid her husband is going to try and kill her. The seriousness of this problem-her husband is part of the Arm in Rochester. He's well connected. He's with the Mob.During a heat wave where temperatures fluctuate consistently in the high nineties with unbearable humidity, Van Savage is sucked into the underworld of organized crime and this one case could wind up being his last. He finds out the truth about who was behind having him taken off the force. People are trying to kill him.Mobtown is poetically written in that classic noir style. Machine gun sentences-pop, pop, pop, pop-riddle the pages. Jack Kelly provides constant clever and witty dialogue. He knows how to build intense scenes and carry his characters through them. An exciting and entertaining story. I would love to see more of Ike Van Savage.--Phillip Tomasso III, author of Third Ring, Tenth House and Mind Play

Published by Thriftbooks.com User , 19 years ago
In 1959 Rochester, New York private detective Ike Van Savage understands that the matrimonial assignments pay the bills so he never refuses any of them. Currently his client wants evidence that her husband Eddie Gill of Gill's Texas Hots & Ground Round is cheating. Ike takes photos of Eddie with an underage waitress that his wife can use to blackmail her philandering spouse. His next client Vicky Petrone wants Ike to find material on her husband that she plans to use to blackmail her spouse into not murdering her. Vicky expects her spouse, local mob chieftain Joe, to kill her as he has done to two previous wives. Ike also works on an arson case that he thinks ties back to the Petrone mob if he can stay alive long enough to prove the link. MOBTOWN is an exciting historical noir that never slows down as Ike bounces from case to case until he realizes all three are connected. The story line will remind readers of the movie Chinatown, but in upstate New York instead of Southern California. Ike is a wonderful lead character whose precocious almost ten-year-old daughter humanizes him so that he never becomes a caricature of Sam Spade. Fans of historical urban noirs will relish a trip to Jack Kelly's hometown.Harriet Klausner
Copyright © 2020 Thriftbooks.com Terms of Use | Privacy Policy | Do Not Sell My Personal Information | Accessibility Statement
ThriftBooks® and the ThriftBooks® logo are registered trademarks of Thrift Books Global, LLC