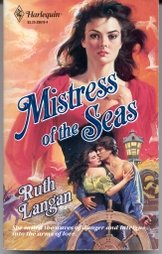 Mistress of The Seas (Harlequin Historical, No 10)

Mistress Of The Seas by Ruth Langan released on Sep 23, 1988 is available now for purchase.

Published by Thriftbooks.com User , 14 years ago
A lady-in-waiting to the Queen of England? Rory MacLaren felt the stirring of his Scottish warrior's blood as he confronted the ravishing beauty he'd last seen commanding a notorious French pirate ship. Trembling under his hungry gaze, Courtney Thornhill faced the proud nobleman who had once been her father's slave. And only he had ever dared to touch her... to kiss her. Only he could expose her as a spy for France... Trapped in a world of intrigue and deceit, could the Mistress of the Seas steer her tender heart on the wild and reckless course of love?

Published by Thriftbooks.com User , 15 years ago
I liked this book. The characters were interesting and the plot was fun. I do have some complaints though. The heroine (Cortney) in the beginning was strong and fierce, able to defend herself but as the story progressed she somehow lost that ability and kept having to be rescued by the hero. I loved how the hero stood by her when she needed him the most though. All in all while it wasn't the greatest book by Langan it was pretty good.
Copyright © 2020 Thriftbooks.com Terms of Use | Privacy Policy | Do Not Sell My Personal Information | Accessibility Statement
ThriftBooks® and the ThriftBooks® logo are registered trademarks of Thrift Books Global, LLC