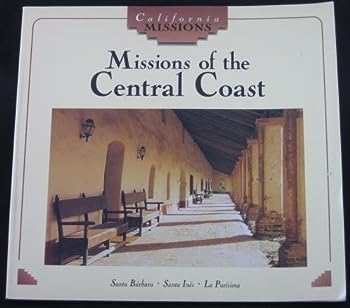 by June Behrens and Lawrence Behrens

The missions of Santa Barbara Virgen y Martir, Santa Ines Virgen y Martir, and La Purisima Concepcion de Maria Santisima dot the central coast of California.Rich in culture and history these beautiful... This description may be from another edition of this product.

Missions of the Central Coast Review

Published by Thriftbooks.com User , 17 years ago
Missions of the Central Coast Review By June Behrens Reviewed By Claire The agenda of this book is to tell people about how the missions were both good and bad; how they helped and how they didn't, and about the people that lived in them. However, there were a few things that I didn't think were quite right. The book was not too biased, but it could have gone into more detail about what the Chumash Indians were feeling, and focused more on how the Spanish weren't treating them correctly. It did deal with these facts, but it said them quietly, and without conviction. On the other hand, it was a very informational book, with a lot of details in it, maybe even more than enough. It covered many, many facts, and also a few that it threw in just for fun. The author included how people used to make soap, Chumash folk tales, and stories about historical figures. This made the book more interesting. One of the things that I learned was that the Chumash people can also be called neophytes. A neophyte is a person who was recently converted to a new belief. I also learned that the Chumash are Hokan-speaking Native Americans, and that a small group of Chumash people currently live near Santa Barbara. One of the biggest impressions that I got from reading this book was how informational Missions of the Central Coast is, I also liked that it has so many pictures in it. There were also maps and drawings that helped me understand where the different Indian groups lived, and where all the different missions were built along the central California coast. If this book was written in the past, I think that people might have stopped the making of the missions. This is because it told a lot about how most of the Chumash Indians suffered because the Spanish were being very inconsiderate, that they made them slaves. They didn't think about how they would feel. All in all, I really recommend this book to all readers that have a taste for history!
Trustpilot
Copyright © 2022 Thriftbooks.com Terms of Use | Privacy Policy | Do Not Sell or Share My Personal Information | Accessibility Statement
ThriftBooks® and the ThriftBooks® logo are registered trademarks of Thrift Books Global, LLC