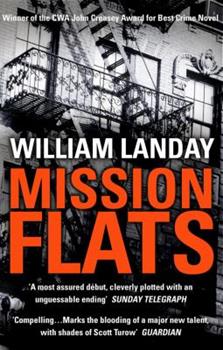 This description may be from another edition of this product. Before the New York Times bestselling success of Defending Jacob, William Landay wrote this critically acclaimed first novel of crime and suspense--perfect for fans of John Grisham, Scott Turow, and...

Published by Thriftbooks.com User , 16 years ago
This is an extraordinarily well written character study and mystery. It is rare to find both together. The story deals with a small town Maine policeman who is involved with the murder of a Boston DA in a Maine cabin. The story is tautly written and involves the grey ambiguities of urban police work. I won't give away the plot but this book moves quickly, has many twists and is altogether superb. If you want to get quickly absorbed in a first rate story and credible characters, this is a great novel. I look forward to more books from this author.

Published by Thriftbooks.com User , 17 years ago
What caught my eye about this book was the writing. The words seem to flow without any problem and the connection to the charachers was wonderful. The author in some spots during the story takes time to address the reader in accounts of what has happen in the book so far. I had read this book on my Thanksgiving vacation and stay up late with turkey sandwhichs and cranberry sauce to finish this book. It was a good read and I enjoy the book very much. I have this author on my "Hit List"

Published by Thriftbooks.com User , 17 years ago
I finished a great book yesterday, William Landay's debut,_Mission Flats_. Set largely in a fictional Boston neighborhood,it nevertheless reminded me a lot of Dennis Lehane's PI books.Landay is a former DA from Boston, so I guess he has the backgroundto make things ring true.The book follows police chief Ben Truman, of Versailles (pronounced"Ver-Sayles"), Maine, as he becomes involved in the investigation ofthe murder of a Boston DA in a local lakefront cabin. Ben had beena promising graduate student in history when he left school to comeback home and help care for his mother, whose Alzheimer's has beengetting worse. Ben's dad, Claude, is the former police chief andBen takes a job with the department to give himself something to do.Given his family, he is quickly made chief, one of the youngest inthe country, and has a fairly liberal attitude to the dispensationof law and order. He certainly isn't ready for a homicide investigationand the other investigators are fairly condescending to him. For somereason, though, he feels a need to stay involved and, with the help ofa retired Boston police detective, John Kelly, he is tutored in theworkings of a real investigation.Evidence seems to point to a drug dealer, Harold Braxton, who has beenon the radar screens of detectives in the Mission Flats area for manyyears, but who has managed to avoid having any charges stick to him.About 10 years earlier, Braxton was the main suspect in the shooting deathof a Boston policeman during a drug raid, but a complicated series ofincidents lead to the case being dismissed. Now, once again, Braxton isone of the main suspects in the killing of Bob Danziger, the DA, who mighthave been digging into the earlier crime, intending to re-open the investigation.This was a great, compelling story, with a lot of insider information on howthe police work, particularly in setting up controlled buys, and so forth.We are schooled in the workings of a major investigation, as well as the political issues that run a case, along with Ben, who is deceptively naive.Ben has several secrets of his own that come out in the course of the investigation and prove to be potential bombshells. The ending, in particular,is quite a surprise and requires us to completely revise our understanding ofBen. He's a complicated character and, ultimately, not particularly likeable.I don't think this will be the first in a series of Ben Truman mysteries.Still, Landay is a great writer and this is a memorable first novel. If youlike Lehane's Kenzie/Gennaro series, you'll probably like this, too. Highlyrecommended.

Published by Thriftbooks.com User , 17 years ago
Ben Truman is a police chief of a small town in Maine. A college graduate, Ben had high hopes of being a history professor but was drawn back to his hometown to care for his mother suffering from Altzheimer's. Now, as police chief, he performs the same tasks his overbearing father did years before. Ben's world is shattered, in a sense, when the body of a murdered man is found in a remote cabin by the lake. The investigation brings in the feds and involves the Boston Police in that the victim was a district attorney in Boston. Ben feels compelled to help in the investigation especially when through a few strange twists, he finds himself one of the suspects. His search takes him into the grittier sections of Boston and, of course, personal danger to himself . MISSION FLATS is one of the most compelling character rich debut crime novels of the year. William Landay is a former assistant DA who has now turned to writing full time. Lucky us! This is a novel that will be highly praised and should be in line for all the major awards. It is beautifully written with descriptions that evoke the setting flawlessly. Characters such as Ben Truman are rendered with such care that the reader will feel they truly exist. The supporting cast are rendered with equal attention to detail. William Landay has attempted to write a literary mystery and in that he succeeds handily. When talk is of transcending the genre, MISSION FLATS should come to mind. It is a lengthy work but readers will not mind in that no words are wasted in the details. This is easily one of the best novels of the year and one worth seeking out.

This is quite a story

Published by Thriftbooks.com User , 18 years ago
I always like to be surprised by a debut novel, and when it is a mystery novel, all the better. Mission Flats begins twenty years ago when a cop is murdered in a bar, and his killer commits suicide by jumping off the Tobin Bridge in Boston. Then we go to Versailles, Maine, to the murder of a Boston district attorney, found by Ben Truman, police captain a town where not too much happens. Back and forth to Maine and Boston, until we slowly learn how and why so many characters are linked. The ending was a knock-out surprise, and well done by the author. The mysteries and secrets in this book are exquisite for a debut novel, and you will not be able to rest until you know them all. The mark of a good book for me is that I thought about the characters for hours after I finished the book, and as a voracious reader I was not ready to start a new book until I could let them go.
Copyright © 2020 Thriftbooks.com Terms of Use | Privacy Policy | Do Not Sell My Personal Information | Accessibility Statement
ThriftBooks® and the ThriftBooks® logo are registered trademarks of Thrift Books Global, LLC