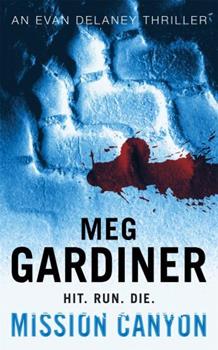 (Book #2 in the Evan Delaney Series)

This description may be from another edition of this product. After a hit-and-run accident leaves a friend dead, Evan Delaney wants justice. But she underestimates the power of the person responsible. When the witnesses begin dying one by one, Evan is unprepared...

Published by Thriftbooks.com User , 12 years ago
Others have given sufficient of the plot. For me, these are usually fast reads, but ths one by the author does warrant slowing down a bit to fully absorb the several characters involved and the little twists that permeate the novel.I do appreciate the author's sense of humor and also the subplot examinng the relationship between Evan and Jesse, especially his concern that he is being truly loved and not pitied, that Evan's feelings are sincere and not the result of feeling noble by continuing a relationship with a criopple.All in all, a good read as a mystery and as a novel.

Evan Delaney=Stephanie Plum with a brain :)

Published by Thriftbooks.com User , 13 years ago
Mission Canyon is the second book in the Evan Delaney series,and the second Meg Gardiner book I have read. I am certainly not trying to disrespect Stephanie Plum(Evanovich books), I have read all but the last of the Evanovich novels and poor Stephanie does not seem to ever get a clue. While there are lots of laughs in those novels, the Evan Delaney books seem to be the next step for me; Meg Gardiner pulls you into the story from the start and keeps the pace up the whole way through. I won't post a long winded synopsis of the story here, as I myself don't enjoy that type of review, but I will say this book is a wonderful read and I can't wait until the next in the series is released here in the United States.

Mission Canyon Will Hold Your Attention From Page One

Published by Thriftbooks.com User , 13 years ago
"The people who are left only want to shut you up. Irrevocably," writes Meg Gardiner in her new suspense thriller, Mission Canyon. Evan Delaney finds herself in the middle of a wicked blackmail scheme after her fiancé, Jesse, is severely injured in a hit-and-run accident that leaves him partially paralyzed and his best friend Isaac dead. The suspect shows up in town three years after the crime and begins a dangerous series of events involving career criminals, assassins, cover-ups, money-laundering, and the FBI. The surviving witnesses to the crime begin turning up brutally murdered. Can Delaney solve the mystery before she, too, ends up dead? Mission Canyon is one of those rare novels that captures your interest from page one. Gardiner brings you on a wild ride of dangerous characters, twisted and exciting plot lines, and colorful diction that will thrill you to the end. The main characters are well developed and interesting; the villains, terrifying and believable. I couldn't put it down and highly recommend it to anyone who enjoys a good read. by Jennifer Melville for Story Circle Book Reviews reviewing books by, for, and about women
Copyright © 2020 Thriftbooks.com Terms of Use | Privacy Policy | Do Not Sell My Personal Information | Accessibility Statement
ThriftBooks® and the ThriftBooks® logo are registered trademarks of Thrift Books Global, LLC