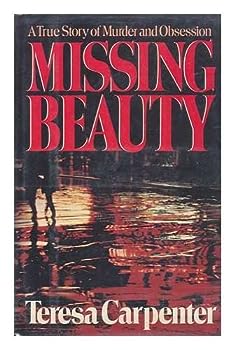 Missing Beauty: A Story of Murder and Obsession

Originally published in 1989, this true crime thriller brilliantly reconstructs one of the most extensive murder investigations in recent years the disappearance of Robin Benedict, a beautiful commercial artist and moonlighting prostitute, and her relationship with the suspect, the eminent Dr. William Douglas. Photos.

Published by Janet Guarrasi , 1 year ago
This was one of the best books I have ever read. It was so well written and really held my attention. Fairly easy to follow. The more I read the faster I read as I couldn't wait to get to the conclusion!

Top of the Line True crime

Published by Thriftbooks.com User , 14 years ago
In MISSING BEAUTY Teresa Carpenter details the destruction resulting from the meeting of Tufts University biology researcher William Douglas and prostitute Robin Benedict. Douglas, a well respected man in his field is presented as being a physically unattractive and socially inept nerd. Benedict was unusual in that she came from a middle class family who loved and valued her, did very well in high school, had some artistic talent, and was not subject to abuse, neglect, or degradation. She did have some history of drug use, but quit on her own and was not the stereotypical strung out junkie. In short, there was nothing in Robin's bio. that would have predicted her becoming a prostitute, and as near as I can tell, she did so because she liked the money and also enjoyed the edginess of the lifestyle. Douglas, hardly a ladies man, met and became totally infatuated with Robin at which point things went rapidly downhill for him. He got her a ghost job on his lab's payroll, began stealing from government grants on his job, and depleted his family's savings for Robin, convincing himself that he and Robin shared a mutual affection and respect and forcing himself to ignore the fact that whenever he was with her he was on the clock at $200 per hour. As Douglas became weirder and more obsessive, Robin decided he was more trouble than he was worth and tried to end the relationship. I will not give away the plot from this point on. Teresa Carpenter has written a true crime masterpiece in MISSING BEAUTY. It has everything I admire in true crime - exceptional and detailed research; background information on the main players so that we get a real understanding of who they are; intelligent and professional writing; and a narrative flow and tension that makes the book hard to put down. It has none of the trash prevalent in bad true crime - the juvenile writing, copied transcripts, forced dialog, phony melodrama, and the imposition of the author's own personality on the narrative. The book is 600 pages long but contains no filler and no repetition and, other than very occasionally and then very briefly, it flows like a river. MISSING BEAUTY exemplifies the best in true crime, and Carpenter's flat out commitment to excellence is to be commended. True crime junkies - read this one!

Published by Thriftbooks.com User , 17 years ago
Thoroughly researched, documented, checked and re-checked for accuracy, in depth analysis-- these are not words or phrases associated with "page-turner" as a rule. But here is the exception. Carpenter's book is all of those things. Any true crime buff who does not have this book in his or her library has a serious lacuna therein. This book is the sort all true crime books WISH they were. While not sparing any details, neither does Carpenter dwell on the seediness of the story, rather focusing her energy on the unfolding tragedy that engulfed two entire families. It is Shakespearean in its arc; one twirl thru a hooker bar (called "Good Times") and Robin Benedict caught the eye of a highly respected biology professor from one of America's top science universities. One or two "innocent" drinks later, they began a relationship that would destroy him, his family, mar the reputation of Tufts University and lead to her violent death. Douglas' tragic flaw, self-resentment over his physical appearance and a weakness for pretty brunettes along with Robin's unchecked greed lead to a horrific conclusion. Must Read True Crime.

Published by Thriftbooks.com User , 18 years ago
As an avid true crime reader, I was delighted to find a genuine "treasure" of the genre. Teresa Carpenter's extremely well written book recounts her extensive research and a plentitude of salacious details about a very fascinating case. Reading this book, I felt the vicarious thrill of "discovering" the inside information that must have been painstakingly collected during the investigation of Robin Benedict's murder. Carpenter leaves no lead unexplored, and no conversation or interview unrecorded, allowing the reader a unique chance to hear about not only the "main players," but what those on the periphery of the investigation could add to the sequence of events.Although Carpenter could have chosen to present the story in a condensed version, I am ever so glad she chose not to do so. Other true crime aficionados out there will probably enjoy devouring the case in its entirety as much as I did.Detailing the sordid story of how outwardly conservative Dr. William H.J. Douglas, known as "the man" in his research department at Tufts University, became obsessed with graphics-artist-cum-call-girl/con artist Robin Nadine Benedict, Carpenter's book expertly uncovers the events that ultimately lead to Benedict's murder. Although strictly a professor and a prostitute on the surface, both Douglas and Benedict turn out to be much more than what they seem.Douglas is an overweight, middle-aged, outwardly devoted family man and highly intelligent, dedicated scientist. Simmering under the surface, however, is a strong urge to explore his hidden, more base desires. Robin, meanwhile, also plays more than one role. In her 20's, she is a loyal and devoted daughter to her closeknit family, with potential to succeed as a graphic artist, yet her greedy desire for the material things in life lead her to heed "the call of the streets."After the two meet at the outskirts of the "Combat Zone" and begin "seeing" each other, karma takes its inevitable course. Douglas finds himself caught up in an obsession so intense he cannot resist its pull. Depleting his own funds, and shaking his marriage and career aspirations to their foundations in the process, he eventually dips into funds from his research grants to finance his rendezvous with Robin.While Douglas spirals ever downward, Robin uses her ill gotten gains for a down payment on a house with her boyfriend/pimp, J.R. Rogers, and enjoys the rewards of increased monetary gain derived from very little actual "work." For awhile, each of them get what they want--Douglas, a walk on the wild side, and Benedict an inflated net worth--but like all exercises in bad behavior/judgment, it doesn't last.Finally the inevitable happens--Douglas is exposed at work as an embezzler, loses his job, and quickly finds himself persona non grata in the academic world, not to mention at home. Instead of commiserating with him for her part in his career demise, Benedict keeps the pressure on, mainly for more money. Ulitmately, their cross p

Published by Thriftbooks.com User , 23 years ago
This book was absolutely excellent; the author was very thorough in her reasearch and really took the reader inside the mind and thoughts of the "primary players." I read the whole thing from cover to cover in one evening; I simply could not put it down. Fascinating reading by a most insightful author. I would read her books anytime! She rates among the best of the true crime genre (e.g. Ann Rule, Jack Olsen). If you are a true crime afficionado, don't miss this one! )!
Trustpilot
Copyright © 2022 Thriftbooks.com Terms of Use | Privacy Policy | Do Not Sell My Personal Information | Accessibility Statement
ThriftBooks® and the ThriftBooks® logo are registered trademarks of Thrift Books Global, LLC