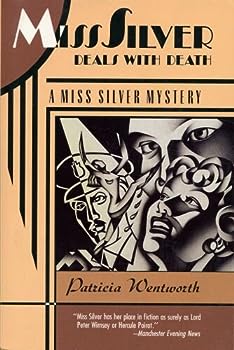 (Book #6 in the Miss Silver Series)

This description may be from another edition of this product. When her fiance, Giles Armitage, is lost at sea in the middle of the Second World War, Meade Underwood is left in the company of a middle-aged aunt with nothing but a monotonous round of bridge...

Maud Silver in the twilight realm of WWII espionage

Published by Thriftbooks.com User , 18 years ago
"I have only two kinds of dreams: the *bad* and the *terrible*. *Bad* dreams I can cope with. They're just nightmares, and they end eventually. I wake up. The *terrible* dreams are the *good* dreams...Everything's wonderful and normal and fine. And then I wake up...And I'm still here. And that is *truly* terrible." -- Urania Blackwell in DREAM COUNTRY, by Neil Gaiman Maude Underwood survived a shipwreck three months before the story opens in 1942, but not the picturesque-tropical-island-type shipwreck of Wentworth's KINGDOM LOST. The German torpedo cost Maude both her health and her fiancee, Giles Armitage. Her broken bones have healed, but not her heart; her efforts to rebuild her strength and bury herself in work are all bent on trying to block the painful memories of Giles - but she can't control her dreams. The opening chapter simultaneously establishes Maude's grief and uses it to introduce the remaining characters without breaking the flow of the story, as Maude, wakened by a noise from a dream of Giles, mentally goes over the inhabitants of the other flats of Vandeleur House to lull herself back to sleep. But someone is slipping through the inhabitants' rooms in the night - is it only Ivy Lord, the maid known for sleepwalking? As is typical of mystery fiction not only set but written during WWII, sympathetic characters (male or female) who are of an age to serve but are available for the action of the story are provided with good reasons, usually either a fortnight's leave or recovery from some serious injury. (Ivy, for instance, is medically unfit.) Wentworth, as usual, writes rings around her contemporaries in terms of characterization, *not* treating bit parts as puppets - and breathing life into them incidentally makes them more credible as suspects. Old Mrs. Meredith - sunken in the past, her middle-aged caregivers appearing only as foils - or are they? Tyrannical Mrs. Lemming, draining away her daughter's youth in servitude - as Agnes crumples under the strain of overwork, underfeeding, and hopelessness, her health too weak to let her escape into war-work. Mr. Drake, of the Mephistopholean appearance, apparent concern for Agnes, and unknown past. Miss Garside, her chilly social mask concealing desperation. Mr. Willard, the fussy civil servant, endlessly finding fault with his motherly wife. (The relationship between the Willards isn't one-sided - both parties could be considered trying to live with, for different reasons.) Last, but not least, Carola Roland - an expensive peroxide blonde, always dressed to the teeth, accepting lunches and chocolates even from dull, innocent admirers in her oddly unfashionable choice of residence. Her taste for cat-and-mouse games, though, may land her in far more trouble. For Giles Armitage is not dead, after all, but only knocked endways - he remembers nothing *personal* for the last 3 years. Meeting Meade by chance, he's inclined to fall in love with her a second time. But Carola, bored with
Copyright © 2020 Thriftbooks.com Terms of Use | Privacy Policy | Do Not Sell My Personal Information | Accessibility Statement
ThriftBooks® and the ThriftBooks® logo are registered trademarks of Thrift Books Global, LLC