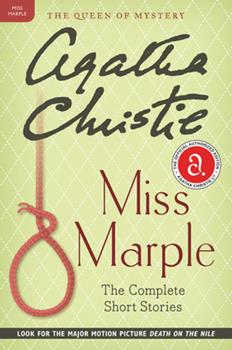 Miss Marple: The Complete Short Stories gathers together in one magnificent volume all of Agatha Christie's short stories featuring her beloved intrepid investigator, Miss Marple. It's an unparalleled compendium of murder, mayhem, mystery, and detection that represents some of the finest short form fiction in the crime fiction field, and is an essential omnibus for Christie fans. Described by her friend Dolly Bantry as "the typical old maid of fiction,"...

Published by Thriftbooks.com User , 13 years ago
I love Agatha Christie, and I love short stories, so this was a good match for me. I can finish a mystery even if I only have 10 minutes. I liked this book, even though sometimes it was predictable. I smile at how characters fall in love and decide to marry so quickly. And sometimes Miss Marple creeps me out, but I like her anyway. She's so intuitive, and I don't always know what on earth she means. This book definitely kept my attention.

"Never say to yourself that anyone is above suspicion."

Published by Thriftbooks.com User , 14 years ago
The words quoted above appeared in a short story by Agatha Christie called "The Four Suspects." They were not spoken by Miss Marple but by "that well-groomed man of the world, Sir Henry Clithering," retired now and residing in St Mary Mead or nearby, but "until lately Commissioner of Scotland Yard." The words were addressed to Sir Henry's new neighbour, a certain Miss Jane Marple. There is EVERY reason to assume that Miss Marple agreed. An earlier reviewer quoted a short passage from "An Autobiography" by Christie. I shall quote a little more extensively from the same source: "Miss Marple," wrote Dame Agatha, "insinuated herself so quickly into my life that I hardly noticed her arrival. I wrote a series of six short stories for a magazine, and chose six people whom I thought might meet once a week in a small village and describe some unsolved crime. I started with Miss Jane Marple, the sort of old lady who would have been rather like some of my grandmother's Ealing cronies--old ladies whom I met in so many villages where I had gone to stay as a girl. Miss Marple was not in any way a picture of my grandmother; she was far more fussy and spinsterish than my grandmother ever was. But one thing she did have in common with her--though a cheerful person, she always expected the worst of everyone and everything, and was, with almost frightening accuracy, usually proved right...." Later, she added, "Miss Marple was born a the age of sixty-five to seventy--which, as with Poirot, proved most unfortunate, because she was gong to have to last a long time in my life. If I had had any second sight, I would have provided myself with a precocious schoolboy as my first detective; then he would have grown old with me." The first sextet of magazine stories were published in the late 1920s but did not achieve the dignity of book publication until 1932, two years after the publication of "Murder at the Vicarage," the first novel to feature Miss Marple. The 1932 volume contained the first sextet of stories mentioned by Christie in her autobiography, plus a second sextet and one more story to provide a satisfactorily ominous title for the collection, "The Thirteen Problems." (In the US, the book appeared--less happily--as "The Tuesday Club Murders.") Christie wrote seven more short stories for Miss Marple. They all are included in this volume. The later stories are good enough, but Miss Marple had so grown in stature that her true milieu was the full-length mystery novel. I suggest that special note be taken of the tenth story, "A Christmas Tragedy." This story represents a sea change in Miss Jane Marple. In all prior appearances she had been a mere device, a voice through which the author could resolve her little puzzles. With this story, the fully developed, elderly, tough as nails, knitting Nemesis of the novels emerges. These twenty stories are competent, if not brilliant. No-one, least of all Agatha Christie, would call them literature.

Published by Thriftbooks.com User , 14 years ago
Quick response, book in good condition. there was a printing defect with the book, but it is still OK.

A Superb Collection of Short Stories

Published by Thriftbooks.com User , 20 years ago
I love the character of Miss Marple. The way she is constantly underestimated never ceases to amuse. Agatha Christie was up to her best when she wrote these stories. Nothing's predictable except that Miss Marple will solve the crime. My favorites in this collection are from The Tuesday Club Murders. None of the stories in this book are very long but with each one I couldn't wait to get to the end and find out who the murderer was. I've read the book twice yet I still couldn't recall or predict who the murder would be in the majority of the stories. Great book!

Published by Thriftbooks.com User , 22 years ago
This book is about a little old lady named Miss Marple who sits around and listens to people try to solve mysteries. Everyone thinks she is really quiet and dosen't really know what's going on. Boy are they in for a surprise!!!!!!!! I really liked this book beacuse it is mystery and humor mixed together.
Copyright © 2020 Thriftbooks.com Terms of Use | Privacy Policy | Do Not Sell My Personal Information | Accessibility Statement
ThriftBooks® and the ThriftBooks® logo are registered trademarks of Thrift Books Global, LLC