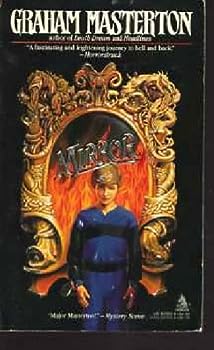 The boy's angelic face masked a terrible evil. For the child was the Devil himself, with all of Satan's irresistible charm--and awesome power A fascinating and frightening journey to hell and back, with all the fate of Hollywood, and perhaps the world, hanging in the balance.--Horrorstruck.

Published by Thriftbooks.com User , 15 years ago
Mirror, What happens when you buy a piece of Hollywood memorabilia from a little old, innocent woman? Boofuls happens, that what. This book was a great read. I usually find Graham Masterton to be hit or miss. This time he knocked it out of the ballpark. This is a creepy tale about a murdered childhood actor who wants his life back, and a poor unsuspecting down on his luck screenwriter who holds the key. The writing was simple, straightforward and to the point. This time around, Mr. Masterton kept me interested with every new page I turned. I do not find that to be the case with some of his other works. (I wont mention titles) It seems Masterton had Alice in Wonderland on the mind when he wrote this one. (More like Alice in Demon Land.) Horror and fantasy elements fill this book; the alternate worlds separated by the mirror give it this affect. If you have not read Graham Masterton, this would be a great one to start with. He rarely gets better than this. (He may have never written better than this.)

One of Masterton's best

Published by Thriftbooks.com User , 19 years ago
Mirror, a horror novel originally published in the late 80s, is one of Masterton's finest. The story is top notch, well-crafted, and well-delivered. When TOR was publishing horror novels on a monthly basis, you could always look forward to a new Masterton title at least once a year.The story centers around an fan obsessed with a child star who was murdered fifty years in the past, at the age of eight. The fan was so devoted to keeping the memory of the child star alive that he writes a musical based on the child's life. However, Hollywood has no takers for filming it.The fan later discovers that some of items belonging to the child are available for sale. He purchases a mirror, later discovering that the child is still "alive" in the mirror. Later, when things take a turn for the worse, the fan discovers the truth behind the child's presence in the mirror. Then the real terror begins...If you can find a copy of this one, it would be well worth your time to read. If you can't, pick up one of Masterton's recent novels published by Dorchester Publications under the Leisure horror line.

Published by Thriftbooks.com User , 20 years ago
This book earned Graham Masterton a place on my bookshelf next to King, McCammon, Straub, and Simmons; the masters of horror. Mirror is a brilliant, nightmarish novel about an evil child reaching out from the netherworld through an antique mirror. Hands down, it is one of the most gripping and entertaining horror novels I've ever read. If you consider yourself a fan of horror, seek this book out. Your collection has a huge gaping hole in it until you own a copy of this book!

Published by Thriftbooks.com User , 22 years ago
i'd never read a book by g.m. before this one, but the cover looked very intriguing so i picked it. the book proved to be pretty intriguing too, not to mention totally terrifying! there's a whole lot of bizarre stuff happenning in this story: a strange alternate world on the other side of the mirror, the son of the devil and ultimately, the devil himself!

Best of the best

Published by Thriftbooks.com User , 22 years ago
This was the first Graham Masterton book that I ever read and it is fantastic. The thin line between the innocent Alice adventures and the gothic horror which Masterton instills is without a doubt some of the most powerful writing ever published. The gore as always is only used to enhance the horror not overtake it, but it is the story which just makes this book the best out of all he has written. Fantastic.
Copyright © 2020 Thriftbooks.com Terms of Use | Privacy Policy | Do Not Sell My Personal Information | Accessibility Statement
ThriftBooks® and the ThriftBooks® logo are registered trademarks of Thrift Books Global, LLC