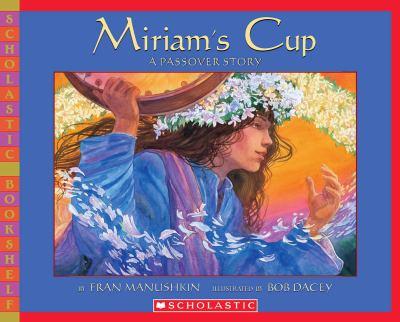 It's Passover and Mama is telling the story of how Moses led the Jewish people out of Egypt, but she also includes the part about Moses' sister Miriam who kept the Israelites alive in the desert with her miraculous well. A beautifully illustrated spiritual book that reminds of the magic of holidays and remembrance.

Published by Thriftbooks.com User , 13 years ago
This is a "Terrific" book for children and people who knew very little about the story of Miriam. It explains in simple terms her importance in Passover. It held the attention of young and old alike but, it's really for the first time reader about Miriam.

A Woman's Role in the Bible Revealed!

Published by Thriftbooks.com User , 19 years ago
It is wonderful that books are being written that show women's influence in Biblical times, especially for children. Miriam is an inspiring heroine in her care of the Hebrew people, bringing them water even in the driest desert. That's why we drink from Miriam's Cup on Passover and it is her story we read here.My 7-year-old daughter, who is at the beginning of her religious education enjoyed the story and the illustrations and we now have "Miriam's Cup" at all our Passover seders.

Published by Thriftbooks.com User , 19 years ago
This is a wonderful book. My children really enjoyed it, but my daughter just a little bit more than her brother. It was a pleasure to see my daughter realize that there are women that have made their mark on history.

Published by Thriftbooks.com User , 22 years ago
I stumbled on this book by accident and I'm so glad I did! This beautifully illustrated book brings the passover story to life. It introduces a new custom of placing a cup for Miriam the prophet on the seder table to honor her and the women of the passover story. We introduced this new tradition at our seders this year and it was met with great appreciation by all in attendance.

Published by Thriftbooks.com User , 22 years ago
I am a Lutheran church librarian. This excellent book about Passover stresses the female role in the story. So often Bible stories stress only men's roles. I buy those, but also go out of my way to find those that stress roles of women to inspire our daughters and granddaughters. Women are religious too, and have great roles to play. This story is told from Miriam's point of view. A modern day little girl named Miriam is told the Passover story by her Mom. We thus go back in time, seeing the Passover story from the ancient Miriam's point of view: the fact that she prophesied her brother Moses' birth and that he would be the Israelite leader; the role of Moses' mother, pharoah's wife, and even the two midwives who birthed Moses but refused to kill him as ordered by the pharaoh, the first act of civil disobedience reported in the Bible. As a Lutheran, I enjoy the Midrashic legendary spin in stories such as this. It adds life to worn and dusty stories. Several other important things about this book are: a modern day song about Miriam on the back cover for use at home or in Sunday School, a historical note at the end of the story, a bibliography for those who want to know more, and the fantastic illustrations in blue-violet and burnt orange done in watercolor, by Bob Dacey, chair of the Visual Arts Dept. at Syracuse University. This is an excellent book both for Jewish and Christian children. For those of you who may also be interested in other Biblical storybooks about girls and women, I can suggest A Prayer for the Earth: The story of Naamah, Noah's Wife by Sandy Sasso. In this book Naamah is seen as the preserver of all the plants on the earth, at God's direction. Noah handles the fauna, Naamah handles the flora. A lovely story. Another is Mary's First Christmas by Walter Wangerin, Jr., in which Mary retells the story of Jesus' birth to the young Jesus. Others are Young Mary of Nazareth by Marianne Mayer, Queen Esther Saves Her People by Ruth Golden Gelman, Queen of Sheba (don't know author) and Ruth Sanderson's Tapestries: Stories of Women in the Bible, with illustrations resembling Victorian petit-point. I would like to find an illustrated storybook on Martin Luther, Ruth and Naomi, Martha and Mary and the like done as well as Miriam's Cup.
Copyright © 2020 Thriftbooks.com Terms of Use | Privacy Policy | Do Not Sell My Personal Information | Accessibility Statement
ThriftBooks® and the ThriftBooks® logo are registered trademarks of Thrift Books Global, LLC