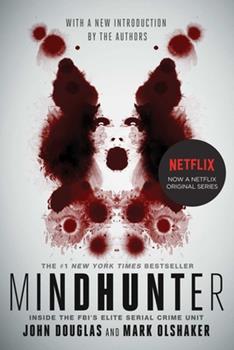 (Book #1 in the Mindhunter Series)

Now a Netflix original series Discover the classic, behind-the-scenes chronicle of John E. Douglas' twenty-five-year career in the FBI Investigative Support Unit, where he used psychological profiling to delve into the minds of the country's most notorious serial killers and criminals. In chilling detail, the legendary Mindhunter takes us behind the scenes of some of his most gruesome, fascinating, and challenging cases--and into the darkest recesses...

One of my faves from long ago!

Published by Lora Mae , 1 year ago
I had a copy of this book years ago and enjoyed it. With the television show out now I wanted to read it again.

Published by Justice , 1 year ago
I went into it knowing Douglas sounds condescending. And I'm so glad that I did! The tone is very much 'I'm better than all these people', rightfully so. My major complaint is that I went into this thinking he would cover a lot more on actual profiling, when it was majority of storytelling. Still a very good read!

Half True Crime/ Half John Douglaz

Published by Thriftbooks.com User , 3 years ago
I choked the book down, gore, ego, and all. Mr. Douglas lived an exciting life in the FBI. He includes detailed info on numerous cases in which he was desperately wanted for profiling. Half of the book is highlighting the minds and profiling of hard criminals and the other is about Mr. Douglas. Don't get me wrong his job is bad@$$ but, man the guy just loves talking about himself. memememememe

Published by Rachel , 3 years ago
I’m a little over halfway through this one and it’s a really enjoyable read, not to mention interesting. It’s written in a very engaging way, despite some of the dark subject matter.

Published by Thriftbooks.com User , 4 years ago
Being a criminology major, this book gives me a different perspective on everything—especially the other side, the perp. It’s a great read. I highly suggest it to anyone who loves a good crime book, or those who just want to know what goes on in the perp’s mind or even just a good read.

Another Great one by John Douglas

Published by Thriftbooks.com User , 12 years ago
This is one of my favorite authors of true crime. He has a certain flair for combining total facts with creative writing to make the true stories interesing, factual but not boring at all. It's amazing how the profiling works out, but as proven in this book, it does. You won't want to put this book down.

Published by Thriftbooks.com User , 12 years ago
As a senior at the University of Maryland double majoring in Criminal Justice and Psychology I picked up this book because of professional interests. The beginning is told like most prideful autobiographies that have the intention of communicating the God-like nature of the author (think Dick Marcinco - The Rogue Warrior, Frank W. Abagnale Jr. - Catch Me If You Can etc.)The descriptions of John Douglas' younger years were kind of tedious and uninteresting(the first 65 pages or so,) as the reason I picked up the book was to get a better overall understanding of investigative profiling. Most of the book is fairly well written, and interesting to read. Douglas points out that he has been the lead profiler in many of the serial crimes cases that Americans seem towet their pants over. (The Unabomber, The Atlanta-Child Murderer, The Green River Killer) He also describes the process by which he interviewed many serial killers after they were caught. Most of the book is dedicated to showing the accuracy of criminal profiles when done by someone who knows what they're talking about. Douglas proves this point over and over again, making ney-sayers look stupid over and over again. I enjoyed the book, but I had several issues with its content. 1. When Douglas relates his first person encounters with criminal interviewing he often goes into an extremely poor writing style exchanging the first person for the second, and exchanging the past tense for the present. He also is fond of using the term "like" a lot just like a valley girl. An example of this would be "Then we were all like this guy is crazy. . ." instead of "I knew what the other team members were thinking, we all thought he was crazy. . ." Because of this, I often found myself rephrasing this poor form of writing while I was reading it in order to get a better understanding. 2. It has some fallacious information do to the publication date. I think newer editions should come with extra content do to the development of what has recently happened in several cases mentioned in the end of the book. Mainly that the Green-River killer turned out to be - one person(not three) - Garry Ridgway; And that BTK was caught and shown to be Dennis Rader. Douglas also gives a bit of spurious information at the end about how Jack the Ripper was the first media sensationalized serial killer - that was actually Gilles De Rais. He probably just didn't consider the French media of the 1400's to be sensationalized enough. Besides those two points Dr. Douglas did a fine job telling of his experiences and definitely got me interested in the field of investigative criminal profiling. If your looking for a more collegiate version of this book without the personal annals check out Robert K. Resslers (John Douglas' partner) Profilers: Leading Investigators Take You Inside The Criminal Mind

Published by Thriftbooks.com User , 14 years ago
John Douglas has the capability of captivating the reader through his real life story telling. This book draws you into the mind of a profiler as he seeks to find the truth. Gripping details, unbelievable acts of terror, and horrifying facts will have you looking over your shoulder for days. You must read this if you are a true crime buff. The legendary profiler is also a legendary author.

Published by Thriftbooks.com User , 19 years ago
I am the Director of Criminal Justice courses at Dodge City Community College, and I offer a course in criminology and offer a serial killer course. MindHunter is a required book for the criminology course. Douglas is able to explain psychological and criminological theories in a way that is easy for the average person to understand. Reading this book helps students apply the theories from the course to something they can understand. I receive positive feedback every semester from students who have really enjoyed reading the book. I met John Douglas a few years ago, and attended one of his seminars--his presentation on profiling was excellent!

This book is one that you can't start without finishing.

Published by Thriftbooks.com User , 23 years ago
Douglas's career experience is anything but boring. Sort of a biographic story, Douglas tells how he struggled to find a career for himself and then stumbles his way into the FBI. He takes us through how the criminal profiling unit became a recognized unit under the FBI. However, don't get me wrong, the book is rich with terror as Douglas recounts the cases he worked with some of the most brutal criminals of our time. I never used to read for pleasure and since reading Mindhunter, I have gone on to read Obsession and Journey into Darkness (also written by Douglas and Mark Olshaker). I strongly encourage anyone who has an interest in criminology, to read this book.
Trustpilot
Copyright © 2022 Thriftbooks.com Terms of Use | Privacy Policy | Do Not Sell or Share My Personal Information | Accessibility Statement
ThriftBooks® and the ThriftBooks® logo are registered trademarks of Thrift Books Global, LLC