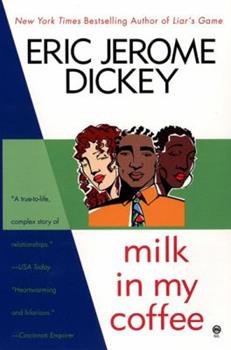 Milk in My Coffee

From Eric Jerome Dickey comes the New York Times bestselling book that stirred up controversy with its bold portrayal of racial identity and subtle understanding of sexual intimacy. Jordan Greene is in culture shock when he arrives in Manhattan from his Tennessee hometown. Still, he manages to keep the pace and stay in the race, with a Wall Street job, a Queens apartment, and a very sexy girlfriend named J'nette. But when Jordan meets Kimberly Chavers,...

Published by Thriftbooks.com User , 20 years ago
Very good book! My first by this author. The main character Jordan has a very real quality...like you were inside his mind. You don't find that happening very often with male characters and especially not with an African American Male character. I felt like I was learning more about how some men think and feel. The different views on race and interacial dating and skin color as percieved by different types of people was very interesting. I liked reading all angles of the topic; the many different outlooks people can have about skin color. I enjoyed reading about a Southern man/person who goes back home to where he grew up. It was very real and very much like what I have experienced in the south when visiting my family. The book was funny too! The initmate moments were not gross which they usually are in books but were still discriptive and often sensual in a very realistic way. I will definitely buy and read all of this author's other books!

milk(in my coffee) does a body good

Published by Thriftbooks.com User , 21 years ago
In MIMC, Eric Jerome Dickey does it again. He brings the characters to live using real dialogue, believable scenarios, and masterful, poetic language.The main character, Jordan Greene, a comfortable-in-his-world guy, meets Kimberly Chavers while catching a NYC taxi. Instantly he feels a powerful connection to Kimberly, and is confused by it due to the fact that he is African-American, and she is white and red-headed...the first white woman he is atractted to. Jordan's "bed-warmer" relationship to his somewhat girlfriend, a sister called J'Nette,is quickly going downhill,and Jordan decides to take a chance with Kimberly. Their relationship is cautious and rocky from the start, and despite their friend's lack of encouragement, and interference from malicious ex's, the pair continue to see each other, each time making their feelings stronger. If this sounds like the usual love story, it's not. With dramatic plot twists and a great surprise ending, MIMC is a book you'll never want to put down, and one you'll never forget.

Published by Thriftbooks.com User , 21 years ago
on the suggestion of my new boss, i picked this book up and couldn't put it down. I literally laughed out loud at the characters, and loved the way EJD's description of the locales, and dialogues were right on point. It's like he was inside the minds and hearts of all the characters that he wrote about. I mean, i could closely identify with the characters, especially KIM although I'm not biracial or anything like that. Also, EJD wrote a good story, and i liked how he fleshed out his characters, and how he used "self-denial" with his male characters. If you like a good read, and wanna read something totally different (that will surprise you, then you need to pick up) this book.

Published by Thriftbooks.com User , 21 years ago
Interracial relationships portrayed in most fictional works have been exploited merely out of sensationalism and have failed to give an honest, valid portrayal of black man/ white woman couples in the 90's... Milk In My Coffee is the latest novel to encounter this subject, and pretty much scores a home run. Dickey is excellent at using pop culture references to describe the world that Kimberly and Jordan live in...Other writers would have used them to the point of overkill, but Eric utilizes them with fresh twists... Jordan's feelings for Kimberly, and his internal conflict over being involved with a white woman are honest and at the same time,we smile as the love between the two blossom. i have dated outside my race constanly, as a black male, so i could easily relate to Jordan. I loved the character, Kimberly, though my only complaint with Eric about her, was that, i thought he was a bit deceptive in portraying her as a "white woman", when she was really "biracial." But then again, there is no such thing as "pure" white or "pure" black races, so i forgive Eric for that "slight of hand." After all, for many decades, if a person had one drop of black blood in them, they were considered BLACK! Eric also makes great use of the supporting characters in the story and of their opposition and eventual, if reluctant, support to their relationship; i thought the feelings expressed by them were honest also, because in real life, people may not always approve of your choices, but they will tolerate them! As for J'nette... I thought Dickey made her to be too bitchy;not all sistas are like that! but overall, i commend Eric for making a bold, refreshing statement about black male/white female couples in America, and how love can work, if two people really want it !

For anyone in a serious relationship--don't miss this book.

Published by Thriftbooks.com User , 22 years ago
Eric must have a secret camera into the hearts, minds and souls of every interracial couple today. It spoke to me and my fiance directly, page after page. I found myself not able to put it down till the last breathless words were completed. I learned things about how my partner may feel, despite his love for me, just because we're of a different race. I even learned a thing or two about friends' attitudes, things that Eric spoke so openly about through his conversational style of writing.This story is a MUST READ for any couple already in, or just considering, a mixed relationship. Eric hits on all the reservations, all the lingo, all the stereotypes that make dating outside your race the thing that it is -- undeniably difficult yet sweet. Once society gets past the color barrier, it's refreshing to watch their eyes open to the fact that we're just MEN and WOMEN in love, not BLACK or WHITE men in love with BLACK or WHITE women. Regardless of our shells, don't our hearts all pump the same color blood?
Copyright © 2020 Thriftbooks.com Terms of Use | Privacy Policy | Do Not Sell My Personal Information | Accessibility Statement
ThriftBooks® and the ThriftBooks® logo are registered trademarks of Thrift Books Global, LLC