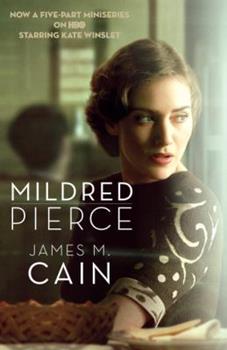 Mildred Pierce had gorgeous legs, a way with a skillet, and a bone-deep core of toughness. She used those attributes to survive a divorce and poverty and to claw her way out of the lower middle class. But Mildred also had two weaknesses: a yen for shiftless men, and an unreasoning devotion to a monstrous daughter. Out of these elements, James M. Cain created a novel of acute social observation and devastating emotional violence, with a heroine whose...

Published by Thriftbooks.com User , 17 years ago
James M. Cain's reputation as a master of the noir genre rests largely on his phenomenally grim 1934 story "The Postman Always Rings Twice," 1935's "Double Indemnity," and this 1941 classic "Mildred Pierce." No other noir writer's reputation-whether Raymond Chandler, Dashiell Hammett, or Cornell Woolrich-rests on only two or three stories. How is it possible to sustain a literary legacy based on two, maybe three stories that you could read in three single sittings? Think movies. You can thank Billy Wilder and Raymond Chandler for Cain's enduring legacy. These two guys collaborated on the script for "Double Indemnity" the film, a film that has since become one of the classics of American cinema. And don't forget Joan Crawford won an Oscar for her work in the screen version of "Mildred Pierce." Too, if memory serves correctly, there are two film versions of "The Postman Always Rings Twice," one of them starring Jack Nicholson and Jessica Lange. If I were a writer, I wouldn't be too enthusiastic that my legacy rested on film versions of my stories. From what I've read of the noir masters, Cain isn't nearly as good of a storyteller as Chandler, Hammett, or Woolrich. He isn't as good as Jim Thompson or David Goodis either, for that matter. He's still good, though. Fortunately, although it isn't as noir as "Double Indemnity" or "The Postman Always Rings Twice," "Mildred Pierce" is a wonderful story embodying several key elements of the noir genre. The novel is the story of Mildred Pierce, a young, leggy housewife and mother in California trying to make the best of a bad situation during the Great Depression. Like millions of other Americans during those trying times, Mildred's financial situation falters when her husband Bert's unemployment threatens to cost the family their home. Since Bert is also cheating on his wife, Mildred eventually forces her man to permanently leave. This situation leaves our heroine caring for her two children, Veda and Moira, without a source of income. Thanks to a helpful neighbor mixed up in bootlegging, a Mrs. Gessler, Mildred obtains enough support until she finally lands employment as a waitress at a Los Angeles hash house. Pierce is a tough lady, full of pride and ideals about what a woman should do in life, but economic uncertainty forces her to make tough choices. Her no nonsense attitude, along with her abilities as a fine cook, soon allows the woman to build a small restaurant/pie shop. A few more years of hard work finds Mildred with three restaurants and a bursting bank account in a time when people still stand in bread lines. She's a success story. Cain is not content to allow his readers to bask in the glow of Mildred's success. As tough of a woman as she is, as careful about business as she is, Mildred Pierce has two problems that threaten to permanently destroy her life. The first problem is Veda, Pierce's eldest daughter. This girl is your archetypical snob, a young lady so enamored of the finer things

I finished this book in less than 24 hours

Published by Thriftbooks.com User , 18 years ago
I don't know quite where to start when writing a review of this book. Even though I had seen the movie and so knew more or less how the story would unfold (or thought I did), I still couldn't put the book down. The Washington Post said that "James M. Cain is the poet of the hard-boiled school of the American novel," and that compliment is well deserved. I was immediately drawn into the story and stayed completely absorbed until the last page. As others have mentioned, the book is much darker than the movie, and more complex as well. I went back and read the last chapter over a few times just to savor the ending again. The first time it was so startling that I couldn't quite believe what I had read. This is just one example of the power of Cain's writing. It's simply remarkable.

a mother's love is blind..

Published by Thriftbooks.com User , 20 years ago
Mildred Pierce is one of those 'tough as nails, heart of gold' mothers who should an inspiration to all women. She kicks out her dead-beat husband, works her tail off to keep food on the table and her daughters happy, and has the guts/brains to start her own successful business. So what's wrong (and why did James M. Cain bother to write about her)?Unable to face reality, Mildred is the victim of her own blindness to her rotten eldest daughter's ways. Not only is her daughter unappreciative, she actually ridicules her mother as being some uncouth and ignorant embarassment. Mildred's toughness melts when confronting her monster daughter, much to her detriment. While a heartbreaking story overall, the ending is especially moving ... have your hankies ready.Perhaps many folks reading this review has seen the famous film adaption (starring Joan Crawford) of Mildred Pierce. While the film generally carries the intent of James M. Cain's written word, there are several differences. Obviously Hollywood wanted to over-dramatize, or simply invent scenes. As much as I like the movie I enjoyed the book more; I found it to be more personal , intense and believable.Bottom line: required reading by all mothers, strongly recommended to everyone else.

Focus On Mother-Daughter Instead of Man-Woman

Published by Thriftbooks.com User , 20 years ago
I never met a James M. Cain novel I didn't like and this one was no exception. The title is of the lead character who rises to great success during the Depression with a series of restaurants in early California. However, she has one big problem: the daughter she raised alone, Veda. Veda becomes a singer and also a master at deceiving and betraying her mother. Veda does not even consider her mother's spouse, her stepfather, off limits. This showcases the same intense Cain focus on a twisted relationship but this time it is on the mother-daughter relationship, arguably a more powerful one than the lover-lover one. This was made into a movie starring Joan Crawford, who won an Oscar playing Mildred. I thought this film version went too over the top though and veered into being maudlin and soap operaish. Stick with Cain's novel, the far more complex work.

Published by Thriftbooks.com User , 20 years ago
If you think that rotten, ungrateful children began in the 90's (or ended with King Lear's daughters), meet Vida Pierce, Mildred's daughter, an amoral young thing with a talent for singing and a disdain for anything low. Watch as Vida climbs to the top of the radio singing world and seduces her stepfather.Excellent character study, and source for the great film which gave Joan Crawford her Oscar®
Copyright © 2020 Thriftbooks.com Terms of Use | Privacy Policy | Do Not Sell My Personal Information | Accessibility Statement
ThriftBooks® and the ThriftBooks® logo are registered trademarks of Thrift Books Global, LLC