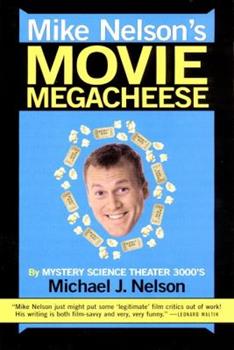 You might think that after ten seasons on the Peabody Award-winning TV series Mystery Science Theater 3000, Mike Nelson has seen enough bad movies for one lifetime. As the guys at Cahiers du Cinema say, au contraire! Hollywood's spigot of stupidity shows no sign of slowing, and cheesy films continue to flood our multiplexes and gunk up our home entertainment centers at an alarming rate. This dire situation calls for a specialist. A professional. An...

Mike Nelson watches bad movies so you don't have to

Published by Thriftbooks.com User , 21 years ago
I will admit that I had doubts about MIKE NELSON'S MOVIE MEGACHEESE when I first learned of it. MYSTERY SCIENCE THEATER 3000 was one of the funniest shows on the air, and, as head writer, Mike Nelson was probably one of the most influential people working for the show. What I worried about was whether the jokes and jeers that he had made over the years would work in review form where we don't have the sheer awfulness of the film to look at. I am glad to say that all of my fears were greatly unfounded. This book is hilarious and scores a solid bull's-eye for every target that it takes aim at.While the television series was stuck with only making fun of low-budget howlers that no one had heard of, here Nelson is free to mock any movie or celebrity he feels like. He certainly doesn't pull any punches; Bruce Willis, Adam Sandler, MIGHTY JOE YOUNG, THE BRIDGES OF MADISON COUNTY and other worthy contenders are all mercilessly heckled here in a way that should be very familiar to any fan of MST3k. The jokes come fast and furious and, just like the show, if you don't pay attention, a lot of funny material will pass you by.The book is vaguely organized into five sections, and consists of scores of short essays and reviews on current films and celebrities. No offering lasts for more than four pages, so if there's something in there you don't like (if you have a fanatical devotion to EVENT HORIZON or Carrot Top) then you don't have very far to read until the next selection. These short bursts prevent the book from falling into dull repetition; there are not really too many things that one can say about WHAT DREAMS MAY COME so the book never feels like it's outstaying it's welcome -- quick joke and then onto the next film. Who would have thought that Sex Pistols songs and movie reviews would have so much in common?In any case, this book comes with the highest of recommendations. Even if he blasts one of your favourite films or actors, you still won't be able to resist laughing. And if the above wasn't recommendation enough, there's a killingly funny photograph on the back inside cover of Mr. Nelson in a smoking jacket, holding a pipe and wearing the most pretentious expression you'll ever see on a man who spoke to puppets for five years. Own it.

Published by Thriftbooks.com User , 22 years ago
As an avid fan of Mystery Science Theater 3000 I have been aware of Mike Nelson's keen sense of humor for a while now. But he truly has outdone himself with this book, in which he delivers swift, crushing vengeance to the bad movies that plague our society. For all of us unable to express our feeling of confusion, hatred and general ickiness toward the movies we hate, Nelson taps into them and manages to even make them funny. And it doesn't stop there, he takes it a step FURTHER and mocks all of the bloated, ego obsessed "stars" who make these vile movies! I highly reccomend this book. The amount of entertainment it gives you will be well worth the money. My one complaint is that it had to end. I sincerely hope that Mike writes another -- how about some reviews of "Overboard" and "Battlefield Earth", along with a scathing commentary on the works of the uber mono-emotion wonder Freddie Prinze Jr.?

Published by Thriftbooks.com User , 22 years ago
The dry, intellectual wit of Mike Nelson is as endearing in print as it was on film. The former host of "Mystery Science Theater 3000" has once again stepped forward to show the rest of us that--yes--bad movies can be fun!"Movie Megacheese" is a collection of essays focusing on movies that are endearingly devoid of plot, character development, proper lighting, and occasionally, dialogue. His tone, though, is never condescending. If you look beneath the humor, you will find a man who does not hide his affinity for these film-makers. Talent? No, they don't have it...but dang it, they're not going to let that stop them! I do think you will enjoy this book, even if you are not familiar with "MST3K". It is laugh out loud funny, timeless and enjoyable to read. And hey,...it even makes a lovely drink coaster when you're done!

Published by Thriftbooks.com User , 22 years ago
There's nothing like a bad movie, is there? And there's nothing more satisfying than a blisteringly funny review of a bad movie. This book is full of them. How funny? I read his review of "The Bridges of Madison County" in bed one night. I had to leave the room because I was laughing so hard I was disturbing my sleeping husband, and couldn't stop for some time afterwards.But it's not just movies. Mike puts the skills he mastered on Mystery Science Theater 3000 to use analyzing the great television shows of our age (including Baywatch, of course!), and the stars of the movies themselves, Val Kilmer being a favorite (and deserving) target. I hope there's a sequel; I can't wait to see what he says about "Battlefield Earth."

Box Office Blockbusters are Funny Too!

Published by Thriftbooks.com User , 22 years ago
This book is hilarious. There were times went I felt like I needed an oxygen mask because I was laughing so hard. If you're familiar with Mike Nelson from MST3K (rest in peace!), then you might be a bit surprised because the riffs here focus on modern day blockbusters and the such from the past decade instead of the cheeseball efforts they mercilessly ridiculed. He even tears into marketing hype machines and action movie logic (you'll never see a Jean Claude Van Damme film the same way again, not that you probably should). Oh, and his review of Val Kilmer-Michael Douglas's "The Ghost and the Darkness" is even funnier than the film itself. There's even sections devoted to television and celebrities (he even has the cha-chas to review the Penn family). And as an added bonus, there's even a review of MST3K: The Movie. If you're really knowledgeable about pop culture and need a good laugh, I highly recommend this book!
Trustpilot
Copyright © 2022 Thriftbooks.com Terms of Use | Privacy Policy | Do Not Sell or Share My Personal Information | Accessibility Statement
ThriftBooks® and the ThriftBooks® logo are registered trademarks of Thrift Books Global, LLC