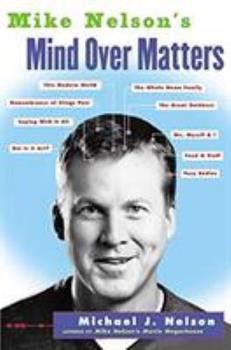 Why do some people retain cute baby-talk names for their relatives (like Num-Num and Pee-Paw) well into middle age? How should a reasonable person respond when Olivia Newton-John sings, Have you never been mellow? Who's responsible for the sorry state of men's fashion, and is it the same guy who invented the jerkin? Is there any future in being a Midwesterner? Can you really enjoy your lunch when the restaurant is decorated to look like an African...

Published by Thriftbooks.com User , 18 years ago
Bottom line: if you like MST3K, you will love this book. Mike Nelson has never been funnier. His essay topics range from the hell that is shopping at Radioshack to a hilarious account of his ill-fated theater career. I would recommend this to any MST fan and everyone, in general. My wife has only watched the show a few times and she absolutely loved this book.Kudos, Mr. Nelson.

Published by Thriftbooks.com User , 19 years ago
I cant praise this book enough.While other authors write about parenting, or airplanes, Mike Nelson has a style all his own. Authors like Dave Barry will go on and on about how tough and silly it is to raise children while Mike Nelson will wonder why his wife needs so many types of moisturizers.The topics in this book range from the very common, (Getting help at hardware superstores) to the very uncommon (why the humming bird shouldn't be considered an animal). Mike Nelson has pet peeves, like everyone else, but his are ones that you wouldn't necesarily think about.Some people seem to have had problems reading this book, but I cant see why. If you have lived for 80 years, or for five, you will relate to this book.This book is a fresh spin on observational comedy, a genre that has been made completely stale by commedians like Jerry Seinfeld or Dave Barry. I hope for more of the same from Mike Nelson in the future.

Published by Thriftbooks.com User , 19 years ago
Who is Mike Nelson? What makes this man tick? What evil lurks behind the guise of goofiness he often adopts? Mike Nelson's Mind Over Matters takes us into the mind of the man I now consider to be the funniest man on the planet. After a decade of work on Mystery Science Theater 3000, Nelson has evolved into a remarkably witty, entertaining author. His first book, Mike Nelson's Movie Megacheese, featured his odd yet hilarious takes on modern, mainstream films, yet this topic did not take him very far afield from his work on MST3K. Now, in Mind Over Matters, Nelson has decided to take on modern life directly, penning a series of vignettes about every-day events, popular culture, and his own childhood and family life. This book is, in my opinion, even funnier and much more impressive than its predecessor. It also gives us some insight into the man most of us MTS3K fanatics tend to view as an actual friend we just haven't met yet.The book is organized into nine sections. In Part One, Coping With It All, Nelson describes seemingly mundane events and activities that somehow become incidents of high strangeness: shopping trips, hotel stays, trips to a health club brimming with old wrinkled men who seem to enjoy showcasing their frightening nakedness in a locker room setting. In Part Two, But Is It Art? he address topics such as movie-going and watching television; the real gem here is a fairly lengthy recounting of his own experiences in musical theatre. Part Three, This Modern World, returns to the subject of modern life and such issues as computer security, annoying morning radio shows, and weird news reports. He steps outside for a breath of fresh air in Part Four, The Great Outdoors, the pinnacle of which is his well-stated condemnation of leaf blowers. Part Five, Remembrances of Stings Past, finds Mike recounting stories and imparting lessons about how things were "in his day." Here we get some good information of Nelson's own life experiences, including his early, usually quite unsuccessful, attempts at attracting the ladies. In Part Six, Busy Bodies, he pauses to reflect on the human body and its obvious flaws; going beyond an investigation into the nature of skin moisturizers and words of wisdom on the topic of bad hair days, he gives us an awfully witty rundown on the past, current, and future state of men's fashion. After a short stop on Food and Stuff in Part Seven, Nelson wraps things up in Part Eight, Me, Myself, and I, and Part Nine, The Whole Famn Damily (not a misspelling on my part), with some very funny anecdotes about his own childhood and his current adult life as a married man with two young children. By the time you finish reading the book, you really do feel as if Mike has let you into his private world and allowed you the freedom to look around for a little while. While there may be one or two essays that don't seem to hit the bull's-eye, his comical aim is, by and large, dead-on and eagle-eyed. I found the book

Published by Thriftbooks.com User , 20 years ago
Michael J. ('Mike') Nelson first soared to international super-stardom in the galactic mega-hit TV show 'Mystery Science Theater 3000,' in which men and bots made fun of bad movies. Striking out on his own, Mike then rocked the world with 'Movie Megacheese,' a collection of essays in which he ... made fun of bad movies. And now, Mike boldly draws us out of our comfort zones with 'Mind Over Matters,' in which he makes fun of (and this is important) things that *aren't movies*!And he does it really well.I was a little nervous at first. Movies, after all, exist to be criticized. It makes sense for them to be reviewed. But why would someone sit down and write a short article about meat? Or deconstruct a trip to Radio Shack or an afternoon moving a buddy's couch? Because they're funny, that's why.I found myself laughing aloud almost from the very beginning. I had to hide my head under a pillow when I read the line about 'eating women and chasing grapes,' so as not to wake my sleeping bride. Mike's analysis of the Fonz, from TV's 'Happy Days,' was hilarious -- but also an insightful puncturing of an inherently implausible TV premise ('I never believed the Fonz could beat up a wood duck, let alone the much larger thugs he often bested or frightened away with lackluster feints.'). The description of a college English professor in 'Did He Say "Meep"?' was unforgettable, and 'Yes, I Have Never Been Mellow' was a moving ode to the Seventies.With this book, Mike Nelson moves beyond the 'any MSTie will love this' category and into the larger (and I hope more remunerative) one of 'any humor fan will love this, period.' Way to go, Mike. We knew you could do it.

Another gem from Mike

Published by Thriftbooks.com User , 20 years ago
I laughed out loud at this book. I rarely do such a thing so take it as a compliment, Mike! Mike's writing style reminds me of Dave Barry, who reminds me of Robert Benchley! If you like wry observations of things you never would have observed before, like toasters, buy this book!
Trustpilot
Copyright © 2022 Thriftbooks.com Terms of Use | Privacy Policy | Do Not Sell or Share My Personal Information | Accessibility Statement
ThriftBooks® and the ThriftBooks® logo are registered trademarks of Thrift Books Global, LLC