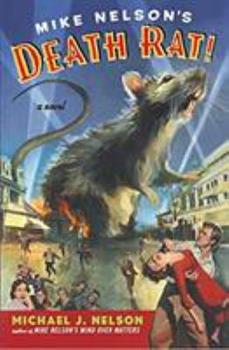 What if an aging, unsuccessful Minnesota author of history books with names like Old von Steuben Had a Farm: The German-American Settlement of the Midwest decided he could write a book every bit as vapid and ridiculous as the books that sold four hundred times more copies than his own Well, he would write Death Rat, of course, the thrilling tale of a man who battles prejudice, his inner demons, and a cunning six-foot-long rat. And what if he was told...

It's worth the time

Published by Thriftbooks.com User , 18 years ago
The question that needs to be answered before reading any book is: is it worth the effort and time? Quite simply, Death Rat! is a yes. Filled with the wit and humor of Mike Nelson, and a book that encompasses the feel and atmosphere of Minnesota, Death Rat! should be on your reading list. The story provides insight to the celebrity world that Mike Nelson never found himself fitting into, and insight into the publishing industry, that from the novel Mike Nelson has little affection for. Enjoyable and entertaining.

Published by Thriftbooks.com User , 18 years ago
I'll admit up front I'm an unabashed partisan of Mystery Science Theater 3000, and so I'm inclined to want to like anything produced by one of its alumni. And while I thought Mike Nelson's two previous books, collections of short essays, were pretty funny -- and I rated them highly -- there was something about them that didn't feel quite right. I think it must have been the format. Humor essays and short fictions always seem a little forced and artificial to me, and there was some of that in Mike's essays too.But with this novel, his first, I think Mike has found his natural genre. This is a very funny novel, but also a very well written one. The plot has a certain level of absurdity, but not too much: the characters are believable and the situation outlandish, but not so much as to challenge our suspension of disbelief.And it's also, as I say, quite funny. The story picks up steam at it rolls ahead and the situation slips beyond our hero, Pontius Feeb's, ability to control it. The people he encounters along the way include a fascinating bunch of characters, including many stolid Midwesterners, a few Danes somewhat out of their element, and some vaguely recognizable individuals like an action-hero Minnesota governor and a funkalicious singer with a large entourage and "royal" name. One of the elements of this story I liked best was that it, not unlike MST3K, never lost its essentially positive and optimistic worldview. No matter how far into the depths Ponty fell (literally, in the climactic scene), the humor and feeling of cheerfulness remained.I've praised Mike's characterizations, but I should note, too, his skill at descriptive narrative. Many of the funniest passages aren't dialogue, but rather Mike's scene-setting. I liked Mike's essays fine, but I'm not in a hurry to re-read them. But I am eager, now, to read Mike's next novel (making him only the second novelist about whom I'll say that). If I have one suggestion for next time, it would be that Mike or his publisher ditch the "Mike Nelson's..." prefix all his titles so far have included. Now that he's established a reputation as a novelist to watch -- and I think this title does that -- having his name on the cover twice seems like an unnecessary conceit.Well done, Mike.

Published by Thriftbooks.com User , 19 years ago
I was skeptical at first of Mike Nelson's plan to delve into fiction. But I am happy to announce that I was more than blown away by this book. I now hope that Mike writes another humor novel.Death Rat reminds me a lot of the books by P.G. Wodehouse. There is a certain eccentricity to all of the different characters, but still a realization that these people could exist. My favorite chapter out of the whole book is when Jack, Ponty's front man, meets with the Prince simulacrum King Leo. I thought for sure that I was going to need an iron lung I was laughing so hard. It really is amazing how much this book can make a person laugh, snort, or just giggle idiotically; and still have a realistic twist to it (six foot giant rats aside). Also, being a Midwesterner I especially enjoyed the part where the Governor of Minnesota yells at the weatherman on the TV. Sounds like just about any Nebraskan dealing with the constantly changing weather.I'd just like to end by saying, get this book, get your friends to buy this book...

Published by Thriftbooks.com User , 19 years ago
Death Rat is a fun, intelligent look at a group of well-drawn characters who struggle with fame and failure. The book's main foils, Pontius Feeb, Gus Bromstad and King Leo all handle being in the public's eye differently . Ponty, a good-natured history writer, comes across to the public as "a picture of someone's crazy uncle", while Gus BromstadÑ who is inwardly a mean-spirited, selfish authorÑworks hard to maintain his loveable, homespun facade. Also in the mix is King Leo, funk superstar, who has immersed himself so deeply in his public persona that his sanity is now in question. Mike Nelson hilarously and cleverly guides these characters through a bizzare series of events as they struggle to keep up appearances and what's hidden in them struggles to come out. Mike Nelson is like an unjaded, more sympathetic Kurt Vonnegut and his first novel is more than just a great, funny read. It's a also a heart-warming look at the struggle to be a successful artist and a real person at the same time.

Published by Thriftbooks.com User , 19 years ago
Mike Nelson became moderately well-known through his stint as Head writer and then Host of the cult-classic, and personally beloved, television show Mystery Science Theatre 3000. This background gives him a natural leg-up on many beginning authors. It helps that he also had two prior books of some success, Movie MegaCheese, which played to his strength -- reviewing bad movies; and Mind over Matters, which took on everyday life.Now, Nelson writes his first fiction novel. The result is a very funny, and cockeyed look at Minnesota and Minnesota popular culture. The major character "Ponty" Feeb is a likeable character, despite the fact that he has lacked any great success in life, though he has done some impressive things. Feeb is at an all-time low when the book begins. In his desperation, Ponty ends up doing a desperate thing and conspires with another somewhat less desperate, but handsome, actor to craft a petty conspiracy that quickly goes both quite well yet also dangerously off their plan. When their effort becomes a roaring success it brings in three major figures all clearly but loosely-based on major Minnesota icons, Garrison Keillor, Prince, and Jesse Ventura.Both urban and rural Minnesota is portrayed in the book, but unlike many other books when portraying "rustic" people, the small-towners in "Death Rat" are no one's fools and are quite able to take advantage of the situation provided them.Despite its purpose as a humorous-work (and make no mistake its very very funny) the book has a gentle nature about it, while being a parody,. Nelson obvious likes the people he is writing about, rather than having contempt for them, which one might have expected based on the nature of his prior non-fiction work. Among the best aspects of the novel are the delightful density of the paragraphs where one notices both obvious and then much more subtle jokes.A great first effort and hopefully the first of many from Mike Nelson.
Trustpilot
Copyright © 2022 Thriftbooks.com Terms of Use | Privacy Policy | Do Not Sell or Share My Personal Information | Accessibility Statement
ThriftBooks® and the ThriftBooks® logo are registered trademarks of Thrift Books Global, LLC