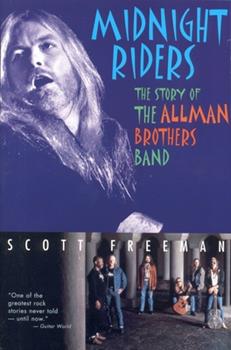 Midnight Riders: The Story of the Allman Brothers Band

In this riveting tale of sex, drugs and rock'n'roll, Freeman brings to life the turbulent career of the original Southern rock band. This history includes the band's blues roots, their wild early days on the road and their recent resurgence.

Hey Little, Brown, and Co.: How About an Updated Edition?

Published by Thriftbooks.com User , 15 years ago
I'll admit that I begin reading popular music nonfiction (especially ones pertaining to rock) with much lower expectations than I would almost any other genre. But Scott Freeman's account is noteworthy as being a book that would stand out as an admirable accomplishment compared with ANY nonfiction endeavor. As for Freeman's subjects, what separates the Allman Brothers Band from its peers isn't just its unique combination of blues, jazz, and Southern rock. The sheer size of the group (with rotating members) means that there is a rogues' gallery of personalities to enjoy. The tale's only downfall is that the middle third is vastly less interesting than the band's beginnings. That is, the Allman Brothers story follows the familiar pattern of a VH1 "Behind the Music" episode: 1.) Band forms and struggles 2.) Band achieves fame and fortune. 3.) Band wallows in excesses of drug use, fleshpots, stupidity. Internecine warfare breaks out over petty nonsense. (I had no idea Greg was such a horse's arse or that Dicky Betts was slightly nuts). 4.) Band disintegrates. 5.) (Optional) Band re-forms with a new sense of purpose. Given this book's density of details, its masterful organization, and its many primary sources, it's incredible that it was apparently written without the cooperation of the ABB. Freeman really outdid himself; I'd love to see him release an updated edition covering recent releases and Betts's firing from ABB in the 21st century.

Published by Thriftbooks.com User , 20 years ago
"Midnight Riders: The story of the Allman Brothers Band" is a biography of the exciting life of one of America's greatest Rock & Roll bands. Scott Freeman has written a wonderful account of the band's beginnings all the way through their breakups and reunions. This band had some tremendous trials to go through such as two original members deaths as well as problems with drugs and greedy record companies. But it is pretty impressive they managed to not only survive Duane Allman's and Berry Oakley's death but also that they managed to still be a great band without Duane, the elder Allman and founder/leader of the band. The story starts out with Duane and Greg's childhood in Florida and how they got hooked on "the fever." It follows the two from their attraction to "black music" or the blues all the way through the last incarnations of the band in the early to mid-nineties. This biography is written so well that I thoroughly enjoyed learning about all the amazing things they accomplished up until the time that Duane Allman dies, then I struggled to get through the rest of it just because I was so depressed that such an amazing musicians life was cut so short. Duane Allman actually died at the peak of his musical powers, but who knows, he could have taken the electric slide guitar to even more celestial heights than he already had on the Fillmore East album. ... The author also gives album reviews of each album as they make them. This was helpful because they are done very well and it gives you a chance to picture the music more clearly. Another plus is the album reccomendations in the appendix, which is great because not very ABB album is fantastic so he tells you which ones to avoid and which to add to your collection. For me, I think this is one of the best stories ever told about a rock band. And the ABB story is an incredible story of love, devastating losses, and redemption. All of it is true. It has increased my love for the ABB, who represent everything good about southern rock and American music in general. It would be a great addition to any person's collection of literature whether you're a ABB fan or not. But after reading this book you may find yourself a fan of the band afterall.

Published by Thriftbooks.com User , 21 years ago
Scott Freeman gives a in depth portrait of one of most influential bands of the Classic Rock era. Most special is the description of Duane Allman's influence on the band. From reading this book, I realized that Duane was both a talented musician and a leader as he knew how to interact with every one of the band members including his sometimes irresponsible brother Gregg. It seems that after Duane died, the other band members carried on a piece of the legacy Duane created. However, each of these other band members has a special personality as well. There are some great stories interwoved in this book which are funny, sad, and historical in the shape of how blues rock music has evolved. Anyone who appreciates rock n roll music and even casually likes this band will find this book a winner.

If your just looking for some good,clean,fun

Published by Thriftbooks.com User , 21 years ago
I've had few literary journeys like the one I've just experienced. You are not only reading about places like Macon Ga. or the Fillmore East as examples, but you feel as if you are actually there. The story is well told as you are brought from the joys of success and good times to the tradgedies of death. This book gives new insights to one of the best bands ever in the history of rock and roll, and clears up some rumors that have followed the band for years. No matter how big a fan you think you are of the Allman Brothers, there are numerous things in this book that you didn't know. In addition, you will learn facts about other prominent figures of rock, recording sessions, and unseen members of the Allman Brothers family. We could probably find flaws with most books, I however, just took in what was given to me and enjoyed it completely. Fan or not, this book is a must for anyone into the music scene.

An insightful and informative book

Published by Thriftbooks.com User , 24 years ago
Scott Freeman has written an insightful and informative book about a legendary band. Being a musician himself, Freeman is able to analyze the band's music with authority, yet he avoids using musical terms that would go above the head of a non-musician. The breadth of information (particularly on the formative and Duane/Berry eras) gives the band's legend a depth that had never been reported before. This book is as enjoyable as a literary read as one of the Allman Brothers' albums is as a musical album. "Midnight Riders" is a fine example of what a music biography should be. I await Mr. Freeman's book on soul great Otis Redding with relish.
Trustpilot
Copyright © 2022 Thriftbooks.com Terms of Use | Privacy Policy | Do Not Sell or Share My Personal Information | Accessibility Statement
ThriftBooks® and the ThriftBooks® logo are registered trademarks of Thrift Books Global, LLC