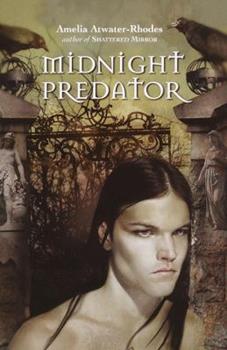 (Book #4 in the Den of Shadows Series)

Though she was once a happy teenager with a wonderful family and a full life, Turquoise Draka is now a hunter, committed to no higher purpose than making money and staying alive. In a deadly world of vampires, shape-shifters, and powerful mercenaries, she'll track any prey if the price is right. Her current assignment: to assassinate Jeshikah, one of the cruelest vampires in history. Her employer: an unknown contact who wants the job done fast. Her...

Published by Thriftbooks.com User , 17 years ago
i loved this book because not only does it have to do with vampires it has to do with shape shifters who are vampires. i must say again bravo amelia for righting a story which includes the suspence of a horror sory the magical transformations in science fiction stories and the whistfulness of a romance stoy with a kick a** ending which makes you wand more. thank you lord for a writer who knows what she is doing.

A Honest Review to MIDNIGHT PREDATOR

Published by Thriftbooks.com User , 17 years ago
I really enjoyed this liked this book for a couple of reasons. One of them is that the author is very belivable, she paints pictures with her words. She is also very discriptive and is good at using exact words to describe people down to the last detail. Emotions and conflict are another subject the author writes about really well. She's excellent at writng about how the character is feeling and when they are in a fight i can picture the movement an attacks the people make as if i'm actually there cheering them on. If i had to choose a favorite part, it would be hard but i think i would choose the part where Turquoise goes into the courtyard which is an "off limits" room to slaves, such as herself. Once she picks the lock to the room and enters she discovers two jaguars one female, one male. The female takes to her an acts almost like a kitten, but the male wont allow her to leave the room... finally Turquoise tries to leave the room and the male jaguar pounces... the rest you will have to read for yourself.I think that the most vivid subjects the author wrote about were characters and conflict. Amelia Atwater-Rhodes can describe a being (vampire, human or anything else) so real, so solid, so... wow. i really can picture them and half the time i expect them to walk through the door. Most the time i wish they would brcause the male characters seen REALLY cute. As i had mentioned before she is wonderful at writing about combat. I can deffinitely picture the bloody lips, and the crunch of broken bones. This book really is worthy, you should read it.

Published by Thriftbooks.com User , 18 years ago
I think this is the best book that Amelia Atwater-Rhodes wrote so far. About a girl named Turquoise Draka, and her rival, Ravyn Aniketos, who are on a mission to destroy Jeshickah, the original ruler of Midnight. Midnight is a vampire realm, and the only way to get in is by selling themselves in as human slaves. Helped by several companions; they manage to get into Midnight, but Turquoise's main obstacle is someone that she would of never thought would befriend her. I won't tell anymore, but you should defiantly read this, even if you're not the vampire/witch kind of reader...

Published by Thriftbooks.com User , 19 years ago
I think that Midnight Predator is one of Amelia Atwater Rhode's best books she has writen yet. I have been a fan of hers since I was in 6th grade, when my mom got me In the Forests of the Night.Turquise Draka is a hunter of vampires for Crimson, one of the training buildings for vampire hunters. Here Turqusie has learned everything to fight a vampire, and is one of the best in Crimson. Her next assignment is to kill the vampire Jeshicah,she is one of the cruelest vampires in all of their history, but turquise isn't alone, she comes with Ravyn another of Crimsons best. But to kill Jeshicah they have to go to Midnight a vampire building where humans are slaves, so they discuise themselves as slaves.I won't tell you any more because I don't want to spoil it for you. I garentee this is an exelent book, I've read it 3 times since I bought it. If you are a fan of Amelia Atwater Rhodes or your looking for a good horror book this is a must read. ...

Published by Thriftbooks.com User , 19 years ago
this book I have enjoyed the most out of her books. It kept you wanting more. Atwater-Rhodes is a very good writer, and she's a young novelist. I recommend everyone to read this book, and also the other books she has written.
Copyright © 2020 Thriftbooks.com Terms of Use | Privacy Policy | Do Not Sell My Personal Information | Accessibility Statement
ThriftBooks® and the ThriftBooks® logo are registered trademarks of Thrift Books Global, LLC