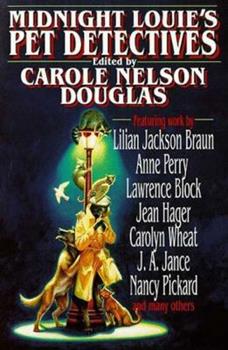 (Part of the Midnight Louie Series)

A delightful collection of stories

Published by Thriftbooks.com User , 20 years ago
Actually, I never heard of Midnight Louie until I read this book. My wife found it in a library search for stories by Lillian Jackson Braun. One of her stories from 1966, "The Dark One," is reprinted in this book, so it showed up in the search. The rest of the tales in this anthology are copyrighted 1998, same year as the book came out, which suggests they are new tales written especially for Midnight Louie's collection. In each story, one or more animals plays a role in solving a mystery. In some cases, the animal itself is the detective, while in others, the animal provides a vital clue for his or her dumb humans. Not only dogs and cats, but also elephants, raccoons, an opossom, a lovebird, a robin, a half-wolf and a Tasmanian Devil take their turn at sleuthing here. Some favorites: In "Daisy and the Silver Quaitsch," the neighborhood dogs literally dig up clues to tip off their clueless masters. "Kittens Take Detection 101," introduces us to two young cats (who don't even know how to use capital letters yet!) who find a dead body while sneaking out to explore their neighborhood. In "Final Vows," cats literally do have nine lives (or more!), and the feline detective, Colonel Mustard, returns from the dead to discover who poisoned him and help save the rest of the neighboorhood cats from the same fate. "On the Take" features a soft-hearted cop who finds a unique way to place stray cats in good homes. (If I lean toward the cat and dog stories, maybe it's because I have three dogs and ten cats. But the Tasmanian Devil get his due here, too, when a careless bomber sets off a charge near his cage, and "A Hamster of No Importance" solves a series of high-society Jewel thefts.) Each story has an introduction by Midnight Louie, the feline detective created by Carole Nelson Douglas (who also happens to be the editor of this book.) Like I said, I had never heard of Louie before but, after enjoying this wonderful anthology, I plan to track him down and read more about his adventures. Carole Douglas, you have a new fan!

Read this one to your own pet detective . . .

Published by Thriftbooks.com User , 21 years ago
Anthologies are very popular these days, providing delightly appetizers that amuse and enlighten and tease while introducing readers to new and wonderful authors. An anthology may be considered successful if there are just one or even two terrific stories contained in its pages. This particular one succeeds admirably, as nearly all seventeen of them are wonderful. Two in particular stand out, however. Suppose you were asked who, of all the currently published mystery writers with whom you might be familiar, would be best suited to write a short mystery in the voice of a Tazmanian Devil? If you said Barbara Paul, you'd be absolutely correct. GO TO THE DEVIL is truly hilarious, and well worth the cost of the entire book, even if you didn't read any of the others. But if you did that, you'd miss out on FINAL VOWS by Elizabeth Ann Scarborough, in which more cats than not do have nine lives, and even if you don't particularly like cats, you'll still enjoy this whimsical bit of fantasy, in which all the neighborhood's cats (living and otherwise) catch the culprit. Other stories (by such mystery luminaries as Anne Perry, Dorothy Cannell, and Nancy Pickard) feature other cats or kittens, a couple of dogs, a hamster, and an owl. It's a very pleasant and enjoyable read, not least of which are the terse introductory comments from the title character himself--Midnight Louie!

The Meows Have It

Published by Thriftbooks.com User , 21 years ago
Midnight Louie has done it again! Not only is he a sleuth extraordinaire but now an editor and reviewer of short stories with animals (not only cats) as the featured heros. If you love the Midnight Louie series here is a way to get to know him better and enjoy new stories by excellent authors!

Published by Thriftbooks.com User , 23 years ago
Who in the world can be more deserving to edit an animal mystery anthology than Mr. Midnight Louie's alter-ego, Carole Nelson Douglas. Although Ms. Douglas credits Lillian Jackson Brown as the first lady of feline felony fiction, many a reader will beg to disagree because Louie is the Sherlock Holmes of the animal sleuthing universe. The detectives, suspects, and villains of these short stories are not limited to canines and felines. An elephant, an owl, and even the Tasmanian devil, etc. star in this collection. The contributors include such luminaries like Dorothy Cannell, Ed Gorman, Nancy Picard, Elizabeth Ann Scarborough, Toni Kelner, Jean Hager, Carole Nelson Douglas, and Midnight Louie, etc. provide wonderful tales that will thrill fans of the sub-genre with its diversity, intelligence, and superb short stories. One last comment is that readers will hopefully heed the closing message of Ms. Douglas that humans must stop animal abuse.Harriet Klausner
Copyright © 2020 Thriftbooks.com Terms of Use | Privacy Policy | Do Not Sell My Personal Information | Accessibility Statement
ThriftBooks® and the ThriftBooks® logo are registered trademarks of Thrift Books Global, LLC