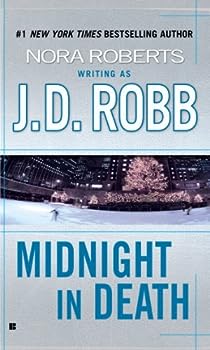 The number-one New York Times bestselling In Death series explodes with intrigue, passion, and suspense.? Now, Nora Roberts, writing as J.D. Robb, propels you into the darkest night of Lieutenant Eve... This description may be from another edition of this product.

Published by Midnight in Death , 6 months ago
Very disappointed in this (tiny) paperback. On the cover it was listed as a 2.00 book. You charged me over 6.00. What a joke!!!! Not even one star

Published by Thriftbooks.com User , 16 years ago
Unlike some, I'm happy that Robb's short stories are being released as individual thin paperbacks. I prefer to pay $3 for just the story I want, than $8 for an anothology with other authors I don't read. This is a novella, but the price reflects that. Plus it matches the other paperback releases. The story itself was entertaining and quick paced. A good addition to the series. Look for Interlude in Death coming soon as a think paperback for $3.

Published by Thriftbooks.com User , 16 years ago
Somehow Nora Roberts, AKA J.D. RObb, has managed to pack all of the best elements of her full lenth books into this short read. Roarke and Eve learn to respect the traditions of a holiday that was not a part of their childhood. (Christmas) while Eve tries to solve a series of murders that targets both her and Dr. Mira as the next victims.

Published by Thriftbooks.com User , 17 years ago
I very much enjoyed this story when it was part of the anthology - what a great idea to release it all on its own as a novella!!! Reviewer Deb, while I'm sorry you didn't realize it was a re-release, you should know that Nora Roberts' new books always have the NR logo on the cover, distinguishing them from re-releases. I don't know of another author who bothers to give readers this heads up. Pretty classy.

Published by Thriftbooks.com User , 17 years ago
Note that all new Nora Roberts books that are in print for the first time have a logo with NR either for New Release or Nora Roberts, I'm not sure, but it helps to find the new books if you are a long-time reader.

Again a reply for reviewer Deb:

Published by Thriftbooks.com User , 17 years ago
I have to agree with Jill on her reply to Deb. But I would like to add some suggestions and observations... What helps is the inside sleeve of the JD Robb series list the books of the IN DEATH series. However, this book is listed under the compliation of "Silent Night". So, new fans may not have been aware of this. But if you look at when the book was written, that may have shed some light that Midnight was not a new release. (someone correct me if I am wrong on this point) The first family Thanksgiving experience Roarke and Dallas have is in noted in the release of 'Origin In Death'. Doubtful it will be expanded upon since they already dealt with it. Please note that the series started in 1995 so there are quite a few books to catch up on if you are just starting out now... Honestly to truly appreciate the series you have to start at the beginning with 'Naked'. The newest one is out this week.. hope this helps. A Nora/JD fan since 1984.
Trustpilot
Copyright © 2022 Thriftbooks.com Terms of Use | Privacy Policy | Do Not Sell or Share My Personal Information | Accessibility Statement
ThriftBooks® and the ThriftBooks® logo are registered trademarks of Thrift Books Global, LLC