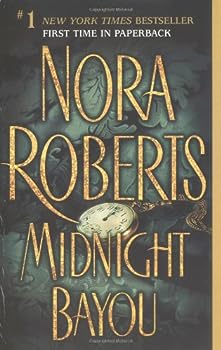 #1 New York Times bestselling author Nora Roberts presents a novel set deep in the bayou of Louisiana--where the only witness to a long-ago tragedy is a once-grand house... Declan Fitzgerald had... This description may be from another edition of this product.

Published by Jayne M , 11 months ago
This is Nora Roberts at her best. Romance, multiple storylines interwoven centuries with a bit of supernatural thrown in. Noticed it is listed as released in 2020 this book is more than 20 years old. Excellent story

threw it in the trash!!

Published by books are my life , 11 months ago
couldn't even get past the first chapter! Spoiler alert! woman gets raped by brother in law right in front of her newborn baby then brother in law kills her!!! this is the backstory to the main story which means its going to keep coming up! i love Nora Roberts but who writes Trash like this! do not read this book if you are not a psycopath!

Published by Horror crazy , 1 year ago
Midnight Bayou is yet another incredible tale of romantic suspense from Nora Roberts, the queen of romantic suspense! When a man decides to buy a massive New Orleans mansion, he has no idea that he will be drawn into an eerie and tragic supernatural mystery. As soon as he moves in and starts restoring the mansion, which is more than a hundred years old, he has strange, frightening experiences that he doesn’t realize are clear indications that the house is haunted. But a local bartender and restaurant owner soon informs him of old rumors that ghosts roam the place and tells him of the home’s tragic history: A forbidden romance occurred in the house decades earlier, leading to murder and scandal. Now the ghosts of the lovers are said to haunt the house and property, hoping to someday be reunited. When the protagonist, a lawyer, learns from his new friend, to whom he is quickly becoming attracted, that the two of them might be the reincarnations of the two dead lovers, they realize that they have a chance to solve the mystery of what happened to them and who killed the young woman, thereby reuniting the couple and finally bringing them peace. Nora Roberts stirs up a hot gumbo of romance, tragedy, mystery, the supernatural, suspense, and terror for a book that is sure to please!

Published by Thriftbooks.com User , 18 years ago
Loved every listening minute! The host of characters, especially Declan and Angelina are wonderful. There could not have been a better reader for this story. If you enjoy romance and mystery, you won't be dissapointed! Loved it, loved it, loved it.

Ghosts and Romance in the Bayou

Published by Thriftbooks.com User , 20 years ago
I have read almost everything Nora Roberts has written. I buy her books as soon as they hit the bookshelves, and Midnight Bayou was no exception. Sometimes I am less than thrilled by her work, but for the most part, I think an "inferior" Nora Roberts book is better than most romance books out there. I thoroughly enjoyed this book! The male lead was, for me, the most lovable and enjoyable of all her male characters to date. He was intelligent, sensitive, but macho, thoughtful, incredibly witty and, of course, rich and handsome. Once of the reasons I read romance novels is to escape to a fantasy world for a little while, and what a great time I had reading about this "too good to be true" guy! The female lead was not so likable, at times, but I really enjoyed their interactions. The dialogue was funny, and the supporting characters were almost as enjoyable as the leads. The flashbacks to the past, although dark, were absorbing. I've always liked ghost stories. And, since I did not grow up in Louisianna, and didn't know that her descriptions weren't accurate, I thought they were fun and charming. The only complaint I have is that I did think the ending was a little anticlimactic. I was expecting more at the end--what that was, I don't know, but something...Despite this, I give this book 5 stars!

This book is Fantastic

Published by Thriftbooks.com User , 20 years ago
Midnight BayouNora RobertsDeclan Fitzgerald leaves his job as a Boston lawyer to buy a house--Manet Hall--that he first discovered in New Orleans 11 years ago. The house hasn't been lived in for some time and needs renovation. Declan finds his joy in restoring the old mansion. There's a sad history to the mansion, however, and Declan begins to experience strange dreams and starts sleepwalking. He finds himself terrified to enter one of the rooms on the third floor. Declan meets Lena, the owner of a small bar in down town New Orleans. He is immediately attracted to her and thinks, "at last" the first time he sees her. Lena and Declan are both linked to the history of Manet Hall as well as to each other. Lena's grandmother lives behind Manet Hall and Declan befriends her. She is a wonderful character. Declan has a terrific personality and sense of humor. This is definitely one of my favorite Nora Robert's books. Being interested in reincarnation and past lives added to the flavor. I must admit I was surprised when I discovered what the subject of the book was but I think Ms. Roberts handled it in a believable manner. Definitely a keeper.

Published by Thriftbooks.com User , 21 years ago
This book is like the Nora Roberts everyone can't wait to buy and read. I must admit I was somewhat disappointed in the last book, THE VILLA. MIDNIGHT BAYOU has everything, suspense, romance and lots of laughs. I enjoy how Roberts brings the legends of the region her books are taking place in. Lena and Declan are both very likeable characters. Although the rich guy and poor girl routine has been played to the death, this story was both believeable and caring. The fact that everyone's lives were not "fixed" by the end of the book was good. Lena's mother was like some mother's or father's I have known from friends. I like the way Nora Roberts handled Declan's relatives also. Anyone who reads Nora Roberts will love this book. CAROLINA MOON, SANCTURAY, and HOMEPORT are just a few books like this one.

This has become one of my favorites!!

Published by Thriftbooks.com User , 21 years ago
I loved this book!! I enjoyed that it was told from mostly the male's perspective and I really liked the lead characters. Declan feels compelled to leave his job as a lawyer and buy a house--Manet Hall--that has fascinated him for 11 years. It is in disprepair and he puts his all into bringing it back to its former grandeur. However, strange things happen while he is there, including flashbacks (memories?) of a murder that took place a long time ago. While doing this, he meets Lena, who plays an integral part in his memories. Declan has a sense of humor and makes you want to believe that people like him really exist. I would have to say my only complaint is that I wish the ending scene was longer--I would have liked to see Lena's reaction to the ring. This is defintitely one of my favorite Nora Robert's books, and I'm usually not into past lives, etc. Buy this book--you won't be sorry. Nora never disappoints!!
Trustpilot
Copyright © 2022 Thriftbooks.com Terms of Use | Privacy Policy | Do Not Sell or Share My Personal Information | Accessibility Statement
ThriftBooks® and the ThriftBooks® logo are registered trademarks of Thrift Books Global, LLC