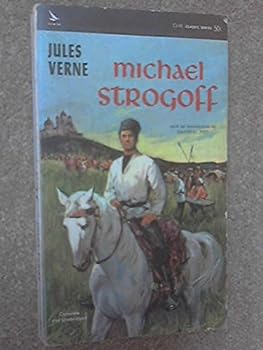 by Jules Verne and Julio Verne

In this 1876 "Mission Impossible" tale of intrigue set in Russia, a traitor has inspired the fierce Feofar Khan to invade Siberia and foment a rebellion. A sinister plot to assassinate the Czar's brother, the Grand Duke, is discovered but all telegraph lines have been cut.

A Classic Adventure Story That Has Stood the Test of Time

Published by Thriftbooks.com User , 14 years ago
Jules Verne wrote this book in 1876 and a 130 years later it is still being read and treasured. The reason why this adventure tale has such long legs is that Verne crafts his story around a great narrative devise. Michael Strogoff is charged by the Czar to a carry a secret dispatch to the capital of Siberia. Between Strogoff and the completion of his mission is an invading Tatar army. Strogoff must test his courage and his many formidable skills to pass through their lines. This is a classic adventure story that has stood the test of time. NC Wyeth's beautiful illustrations make this edition even better.

Published by Thriftbooks.com User , 18 years ago
I first read Michael Strogoff in the Classics Illustrated comics version. Then I read it textually in the N.C. Wyeth illustrated edition, and later picked up a paperback that came out in the mid 1950s. I remember taking out my atlas and tracing his route across the Russian Empire, I believe from St. Petersburg to the shores of Lake Baikal. Learned some things about Russian geography that I never forgot, in addition to enjoying the great adventure story.I found out later that Jules Verne wrote in vivid detail about places he had never physically visited. Would like to get some opinions from native Russians or travelers who really know the places mentioned. But even if they do reveal all kinds of mistakes or misperceptions, the story is still a great one.Would like to purchase a new copy of Michael Strogoff to replaced my old paperback. But now they tell us that Verne's works were usually abridged in English translation, to become "novels for boys" without the political commentary and other adult details. So I guess I will wait until I know that there is an unabridged English translation available, like for Mysterious Island and some others.

Published by Thriftbooks.com User , 19 years ago
Having recently found the boutique audio publisher Tantor, I have been a major consumer of their MP3 CDs and regular CDs. In addition to my favorite Edgar Rice Burroughs (yes I am over 50!)I purchased Michael Strogoff in MP3 CD format and could not stop listening. The story Jules Vern plays out for us is highly visual and while filled with the typical chance meetings found in the style of adventure writers of that day, it was first rate. The inclusion by Vern of the two newspaper reporters from England and France in several stages of the book was an interesting twist of comedy in a generally serious book.Those that have not had an opportunity to listen to audio books on CD or MP3CD would be delighted with this one to start. Naration by John Bolen is as usual superior especially with male voices. His female voices sometimes can be too high pitched and shrill but once one has become a regular Tantor listener, it falls out of the conscious.Highly recommended literature.

Published by Thriftbooks.com User , 19 years ago
Okay, maybe not - yet. This beautiful story of adventure, danger, heroism, and hairbreadth escapes leads me to believe that visionary Jules Verne correctly predicted yet ANOTHER modern invention - the blockbuster action/adventure film. And yet it would be a shame to make a movie of this brilliant novel, however ideal it might be. I have loved every Jules Verne book I have read (with the exception of the wretched Paris in the 20th Century), and I believe this very well might be his best. I am thrilled to see it back in print. Read it and marvel at how far ahead of his time Verne was in every respect.

Not your typical Jules Verne, but definitely a classic!

Published by Thriftbooks.com User , 22 years ago
MICHAEL STROGOFF is not the typical Jules Verne novel one might expect. It's not the science fiction that he is so well known for. It is however an adventure that is sure to please, just like his scientific adventures (JOURNEY TO THE CENTER OF THE EARTH, FROM THE EARTH TO THE MOON, 20,000 LEAGUES UNDER THE SEA). This novel is more comparable to his lesser known FUR COUNTRY, which is also highly recommended. MICHAEL STROGOFF is the story of the currier of the czar of Russia during a Mongol invasion. There's adventure, romance, strategy, comedy and just about a little something for everyone else. All combined, MICHAEL STROGOFF is an exciting, quick read that will surely entertain just about any reader.
Copyright © 2020 Thriftbooks.com Terms of Use | Privacy Policy | Do Not Sell My Personal Information | Accessibility Statement
ThriftBooks® and the ThriftBooks® logo are registered trademarks of Thrift Books Global, LLC