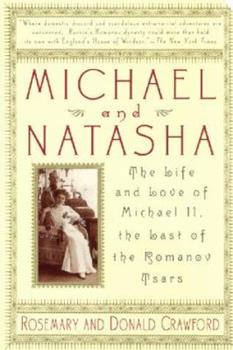 Michael and Natasha: The Life And Love Of Michael ll, The Last Of The Romanov Tsars

Michael and Natasha is both an astonishing love story and an illuminating look at the last glorious days of the Romanovs and the brutal revolution that ended their reign. Based on private diaries, letters, and documents long hidden in the Soviet archives, it sheds light on an extraordinary tale of enduring love and ultimate tragedy that, until now, has never been told. He was the Grand Duke Michael Aleksandrovich, the tall, dashing brother of Tsar...

Published by Thriftbooks.com User , 17 years ago
I have read many books about the Romanov family over the years. Rosemary and Donald Crawford's "Michael and Natasha : The Life And Love Of Michael II, The Last Of The Romanov Tsars" is one of the best - certainly the most riveting. Although very well researched, documented and indexed, the book reads like a wonderful novel. It is an extraordinarily moving love story and gives the reader a bird's eye view into the lives of the Romanovs and the fall of their dynasty. Grand Duke Michael, was the dashing youngest brother of the last Tsar of Russia. The book chronicles Michael's early life, giving a detailed account of his relationship with his family. He became involved with Natalia, (or Natasha) Cheremetevskaya, a commoner, while he was serving in the imperial army. She was 26, quite beautiful, and captured Michael's heart during their first dance. Natasha was twice divorced and was widely dismissed as a scheming social climber. Michael's romantic courtship of Natasha, their extremely close relationship, morganatic marriage and banishment from Russia is all documented here, along with observations by friends, family and actual letters. There are also never-before-seen photographs. Apparently Grand Duchess Olga, Michael's sister, not only knew Natasha, but evidently was a friend. Some of the unusual photographs in the book document this friendship. After the couple married, Olga turned her back on them. When Tsar Nicholas II abdicated, and abdicated for his young son, Michael was offered the throne, but he refused the opportunity to rule Russia because society and the Russian people would never have accepted his wife. There exists the possibility that if Michael had accepted the crown, there may have never been a Bolshevik Revolution. One of the most fascinating books on the period that I have read. It is a powerful and tragic story and I highly recommend it. JANA

Published by Thriftbooks.com User , 21 years ago
While I question the authors' English usage at times, this is a good book that fills a large gap in the history of the fall of the Romanov dynasty. Whether the authors meant to show Nicholas and Alexandra as two of the biggest baddies who ever drew breath is another story, not to mention Grand Duchess Olga Alexandrovna, usually seen as the ill used mouse of the Romanov family [due to her biographer Ian Vorres] but here, refreshingly portrayed as she was probably was; conniving and devious, with both eyes fixed on the main chance! Michael & Natasha is a moving story of the ups and downs of Imperial fortune. A couple who were clearly in love. Natasha's foundering fortunes in exile make heartrending reading. The authors tell the story in a straigtforward manner, and the narrative flows well. One point the authors don't quite clarify is the fact that Natasha's claim on Nicholas and Alexandra's bank account in Berlin in the 1930's was made as the beneficiary of her late son, not because she was on equal footing with the other relatives. As a morganatic wife of a Grand Duke she could not inherit, but as the mother of Michael's deceased child she could. Her action galvanized Anna Anderson's supporters to request the withdrawal of the certificate of inheritance which led to the ensuing court case to prove that Anna Anderson was Grand Duchess Anastasia. The authors claim Mrs Anderson's action failed in 1961, but in fact the case was finally abandoned in 1977, not before it was ruled 'non liquet' [that is, unsatisfactory to both parties,] in 1970. Interestingly enough, it was the bank which held the funds who wrote to Mrs Anderson to warn her of the action. Could they but have known!I think the book is quite well researched, as the authors have been able to avoid the traps that Massie fell into in Nicholas and Alexandra.I've read this book twice now, and it all seems so sad. That Russia was governed by such an unstable woman and that no-one could have possibly foreseen the outcome of her actions throughout the 20th century and beyond. Least of all by the remainder of the Romanov dynasty.

Published by Thriftbooks.com User , 21 years ago
As an avid reader of books about the Romanov family, I consider Rosemary and Donald Crawford's dual biography one of the best.Admittedly, much of my enthusiasm has to do with the heretofore lack of information about Michael, youngest brother of Tsar Nicholas. Except for the wonderful biography of the brothers' eldest sister Olga, mention of Michael often has been sketchy and/or flat.However, this account skillfully represents Michael and Natasha as three-dimensional people -- flawed but sympathetic, occasionally admirable, and often (like most of us) guilty of errors in judgment.In previously published books, Michael almost always comes off as little more than a handsome dolt. In this biography, however, we read that in addition to being the impetuous, charming and relatively carefree younger brother of Tsar Nicholas, Michael also was bright, well-regarded by many government officials, and possessed of considerable leadership ability. The beautiful Natasha, while definitely a "scarlet woman," matched and perhaps surpassed Michael in the charisma department, but -- unlike her lover and eventual husband -- possessed amibition and tenacity. Together, they were quite a couple, and today would be considered glamourous and trend-sitting.Understandably, however, Nicholas and Alexandra -- being far more conventional, and the epitome of Traditional Family Values -- were highly intolerant of Michael and Natasha's relationship and marriage. This book explores many intriguing aspects of the Michael/Natasha liaison, such as the evolvement of their relationship, and the supposed disapproval of the Grand Duchess Olga Alexandrovna, who also was involved in an unconventional relationship.In checking other reader reviews of this book, I am surprised at the range. Some are completely lauditory, while others are completely condemnatory.The title should clue potential readers that the Crawford's book is, above all, a portrait of a romance. That it is played aginst the final years of Tsarist Russia is of course important, but those uninterested in family and social dynamics are advised to look elsewhere. However, for those of us who are interested in the story of a relationship and are familiar with with Tolstoy's Anna Karenina, Michael and Natasha's story, like that of Anna and Vronksy, is fascinating, moving, and timeless. The Crawfords are to be commended for their excellent research and highly fluid writing style; this is a book I will want to return to again and again.If you share an enthusiasm for the Romanovs, I invite you to contact me at whitcombj@juno.com.

Published by Thriftbooks.com User , 22 years ago
Rosemary and Donald Crawford present a little known adenda to the story of the Romanov Tsars. Their research and sympathetic presentation offers entrance for the reader into the great love story of Michael and Natasha. It quickly catches you up in a pace, all too fast, racing to a tragic finalle. The reader is plundged into the confusion and multiple currants of the Russian experience of the First World War and then, the following Revolution. You shout helplessly at the book, "flee for your lives!" during the short window that they had that opportunity. You pour over and over the wonderful pictures as you become more and more familiar with the characters. I was supprised at a new and revealing discription of Nicholas and Alexandra, showing them with all their weaknesses, bumps and warts. It was interesting that the brothers, Nicholas and Michael shared the trait of complete love and devotion to one woman. One wonders about the family dynamics that produced such a shared commitment. The book is another opportunity to examine the Russian capacity for ineptitude that still goes on today. In the sum, it is the account of a great love story, doomed by it's time.

A love story that transcends time.

Published by Thriftbooks.com User , 23 years ago
As an avid fan of Russian history and letters, I was delighted by the publication of Michael and Natasha: The Life and Love of Michael II, the Last of the Romanov Tsars, by Rosemary and Donald Crawford. I was first intrigued by Michael Romanov and Natasha Wulfert through Kyril FitzLyon and Tatiana Browning's superb pictorial volume, Before the Revolution: Russia and Its People Under the Czar, where the couple appears photographed together on the occasion of Natasha's birthday. Somehow, and despite the grandeur of their surroundings and attire -- the epitome of that majestic and romantic age -- they came across as very appealing and almost modern individuals. Their story is the moving saga of a love that was doomed, not merely due to differences in pedigree and status, but because of historic forces they (particularly Michael, with his unswerving belief in human kindness) unfortunately underestimated. Throughout this engaging work, the quality that most vividly comes across is the couple's deep and abiding love for one another -- a love that survived ostracism, political cataclysms, and, one is convinced, even the alleged finality of death. The lifestyle they exemplified, spent amid the grandeur of vast country estates, brilliant St. Petersburg salons, and the intrigues of the Romanov court, has been faithfully preserved by Russia's leading authors in enduring works of fiction, and, in fact, striking parallels exist between Natasha and Tolstoi's immortal Anna Karenina. That Natasha herself may have examined the similarities, with perhaps a mixture of dread and amusement, is a clear possibility, as she was a cultivated woman who, moreoever, moved in artistic circles. Status, rank, and privileged position notwithstanding, both Michael and Natasha reveal themselves, through letters and contemporary testimonies, as thoroughly decent human beings who found themselves (proverbially) at the wrong place and time in history, and whose love, courage, and integrity alone were no match against a harsh age. Foreknowledge of the events that conspired and ultimately triumphed over their hopes for happiness and, indeed, their very existence, is not a damper to the reader's obstinate hope that, despite history's well known verdict, they and their private world will endure. Natasha, noted for the beauty of her "sad eyes," perhaps always sensed that tragedy would one day overtake her, even when tangible evidence of that fact was still far in the future. Michael, an avid photographer, left behind a rich pictorial record of their brief time together, so as to capture and preserve moments that, in their poignancy, he perhaps sensed were too lovely and fragile to endure. Reading this excellent work of biography, one is again moved to sorrow by the fate of the Romanovs who, despite their political blindness, did not deserve the cruel and bloody end which, with rare exceptions, befell most of their lineage. If there is a flaw to the biography at all, it is
Copyright © 2020 Thriftbooks.com Terms of Use | Privacy Policy | Do Not Sell My Personal Information | Accessibility Statement
ThriftBooks® and the ThriftBooks® logo are registered trademarks of Thrift Books Global, LLC