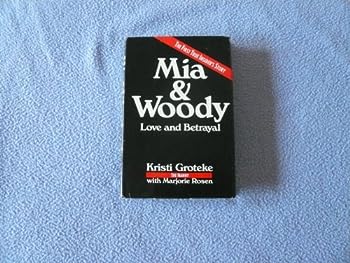 MIA and Woody: Love and Betrayal

A insider's look at the lives and relationship of Woody Allen and Mia Farrow discusses the unraveling of the famed couple, from revelations about Allen's affair with Mia's adopted daughter to... This description may be from another edition of this product.

Published by Thriftbooks.com User , 14 years ago
Unknowingly poised on the edge of melodrama, author Kristi Groteke innocently accepts a job as a nanny for a celebrity couple---Mia Farrow and Woody Allen. Little does she know that within the year, her life will be turned upside down, just as the lives of the famous couple and their children are---set against the backdrop of a seemingly routine life of a family, a furor erupts when Mia discovers that Woody is having an affair with her daughter Soon-Yi. And then, in the midst of this angst comes the allegations of molest by Woody of the couple's adopted daughter Dylan. Before the storm, the author marvels at the simple routines of this family, from the Connecticut house to the Central Park West home that Mia shares with several children---some biological and some adopted. Woody, of course, lives in his own duplex apartment across the Park, but visits frequently. In this fashion, the two have developed a semblance of normal family life for a dozen years, collaborating in movies and co-parenting the children. Court battles ensue, and the author describes the stressful climate of the home while this is happening---it takes more than a year for everything to be resolved. But while it is playing out, the day-to-day lives of the family members change---subtly at first---but then dramatically, as the life they all once knew crumbles around them. The author provides a true insider's version of events, albeit from her point of view. I especially enjoyed the glimpses of celebrity family life, for despite the traumatic events, a kind of normalcy was sought by the parties involved. In this book, Mia & Woody: Love and Betrayal, one fact shone through---Mia's love for her children.

If you want insider dirt, this is for you!

Published by Thriftbooks.com User , 20 years ago
Straight from Woody and Mia's Nanny (Kristine Groteke). She did everything with the family and it shows throughout this book. You will get the inside scoop on what Mia, Woody, and the kids are really like. Here's a couple fun examples from the inside info: Woody had a special shower built for him in Mia's house but refused to use it because he felt the germs built up inside it. Another one is that when Woody and Mia were not getting along well, Woody would bring a pre-cooked chicken to the house because he was concerned that Mia might poison him with her cooking. Not everything is so light hearted, as we find out that Woody's daughter Dylan may have been coached by Mia into saying he molested her. Even worse, Woody may have molested Dylan (the charges were dropped). Also, it turns out that Soon-Yi has a double-digit IQ and may have been duped by Woody. Interestingly, Groteke says she does not know for sure about either of these issues but admits that she found it strange that Woody and Soon-Yi wound up together romantically.Overall, I think the only way we could get a closer look at their lives would be if Woody, Mia, or Soon-Yi wrote a book themselves.

As a fan of both Stars, this is an entertaining book

Published by Thriftbooks.com User , 21 years ago
Very well written, thoroughly engrossing. Both fair in that the author does not give specific opinions on the alleged abuse, but gives the reader a feel for what the Farrow-Allen relationship was like day-to-day and what the Farrow family went through during the "trial of character" that took place. I would like to read a follow up on what is going on now and how it has ended, and if it has ended? What is the Farrow Brood and Woody doing now. 2001-Lee
Trustpilot
Copyright © 2022 Thriftbooks.com Terms of Use | Privacy Policy | Do Not Sell or Share My Personal Information | Accessibility Statement
ThriftBooks® and the ThriftBooks® logo are registered trademarks of Thrift Books Global, LLC