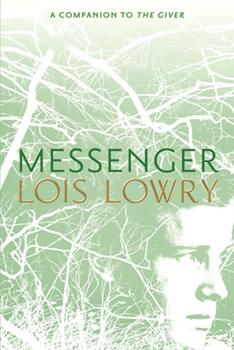 The third book in Lois Lowry's Giver Quartet, which began with the bestselling and Newbery Medal-winning The Giver.Trouble is brewing in Village. Once a utopian community that prided itself on welcoming strangers, Village will soon be cut off to all outsiders.As one of the few able to traverse the forbidding Forest, Matty must deliver the message of Village's closing and try to convince Seer's daughter Kira to return with him before it's too late...

Published by E.Kerley , 9 months ago
My only complaint is that I wish it was longer. Love this series and could not put them dow.

Published by Thriftbooks.com User , 16 years ago
Lois Lowry is one of those unique authors who has won the John Newbery Medal for children's literature twice. Once for the first book in this trilogy and once for a book about the Holocaust called Number the Stars. (Just as an aside only one other author has ever done that Madeleine L'Engle who I would also recommend highly.) I would begin by recommending any of her books; they are all worth the time and the effort. This trilogy is set in a post apocalyptic world. The first two books each focus on different community's who have recovered from the devastation differently, both have strengths and both have weaknesses. And a young boy must heal them both and the land if either is to survive. The Giver Lois Lowry Laurel-Leaf Books ISBN:0440219078 Jonas is a young boy who lives in a community with a lot of technology and many rules about it. He has only seen an airplane twice for planes were not suppose to over fly villages, it was against the rules. Children of the same age are raised together and each December they move up a grade, when the reach the age of twelve they are selected for occupational training Jonas in talking to his friend states about selections: "Jonas Shrugged. It didn't worry him, how could someone not fit in? The Community was so meticulously ordered, the choices so carefully made." However all the other Twelve's were assigned and Jonas was skipped then at the end of the ceremony it was announced that he had been selected he was chosen to become the `receiver of memory.' He was to learn all the history and story of the people and become an advisor to the council that ruled the village. It only happened every so many generations and only 1 keeper of memories was installed in each village. Jonas and his family take in an infant who is not maturing and growing quickly enough. The child is given a year extension, when the child is marked to me replaced (abandoned and killed). Jonas takes the child and runs away. Through the winter Jonas knows he will not make it and pours all the memories he has learnt into the child. But can he save the child? What will happen to him and his community? Jonas thought his world was perfect, that the elders had everything under control, that there would never be war again. But also a world without choices. Till he is given the knowledge of the past the choice to save a child or let it die? Gathering Blue Lois Lowry Laurel-Leaf Books ISBN:0440229499 Kira, is an orphan and she has a twisted leg, she lives in a village with very little technology and one that casts aside those who do not contribute. The weak, injured, and helpless are abandoned. However things are starting to turn around for Kira, she has been spared by the all powerful Council of Guardians, for she has a gift she is a weaver and can die cloths in ways no other in the community can. As an artisan she is installed in the palatial Council Edifice and spends the whole year working her trade, her primary task is to care for the Robe of

A Messenger delivering a review!

Published by Thriftbooks.com User , 17 years ago
Messenger by Lois Lowry February 14, 2005 Reviewer: Ashley Have you ever experienced an alternate reality? Have you ever wondered what a different world would be like? If you have read the Giver, Gathering Blue, Number the Stars or the Silent Boy then you know Lois Lowry. She hooked me into her amazing books and she will hook you in too. Lois Lowry made up whole universes different from ours. She wrote Messenger as a type of sequel to the Giver and Gathering Blue. Lois Lowry made a future beyond our existence. She turns from historical fiction to realistic fiction to science fiction. I am usually not a fan of science fiction but her books just BLEW my mind!!!!!!!!!!!! Lowry sets a whole new goal for young readers. If you usually aren't into science fiction or unbelievable genres...then you should think twice! In Lowry's book Messenger she creates a Utopia with no exceptions, injustice or conflicts (supposedly). How does greed fall into this village? This community takes in the sick, the old and the wounded. They help these people with NO questions. The villagers take the new in and accustom them to their culture. This village takes the stragglers and actually looks for people in need. A teenager named Matty is a normal boy in Village. He has normal hopes and dreams like any other boy. Apparently there is something strange about him. One day Matty wandered into the forest. He usually does this, since he was the messenger of Village. Matty notices something strange...about a frog. He says this is a sign of something very important. He says this is secret. Matty had a normal life in village. However, he noticed the changes that were accidently being made. The usual happiness and bustle of the town turned into chants and riots. The usual greeters and joyful people were scornful and melancholy. How did this surprising and sudden change occur? Where did all the happy feelings go? If you read Messenger...you will find out! Matty is on an expedition. He is posting the message everywhere that Village is closing down. No more new ones. No more helping and accustoming, j ust the greedy and mournful citizens that already live there. More importantly Matty is trying to bring back a girl that is supposed to be in Village. Her father is in Village and he misses her so. He has to hurry because Village is closing in two weeks. It is a long adventure but usually very simple. This time it's different. The Leader of Village says that forest is thickening. It got scarier and the creatures became hateful and barbarous. Matty was very worried that the gentle forest was changing. Matty and the girl scraped their way through. They got an injury every day. Instead of Matty strolling down the paths like he was used to, he limped and punched and barely made it onto the paths. Every time he cut something down, it would grow back up twice as fast. Matty didn't understand the changes. And he never found out why they were happening. When I finished reading Me

Published by Thriftbooks.com User , 17 years ago
Messenger hooked me at the beginning and took me to another world by revealing step by step events. Each chapter showed me another part of his life. Matty helplessly saved the villagers and the forest knowing that he would not be here long. From a Harry Potter series buff, Messenger went steps further to immerse the reader in the book and give me the keen sense of living the part. A Kentucky 5th Grader

A great way to tie it all together!

Published by Thriftbooks.com User , 17 years ago
I have thoroughly enjoyed this series of novels by Lois Lowry. Beginning with The Giver, then Gathering Blue and now Messenger, this is a fantastic group of books that can be read individually or in their rightful order. Not until I reread Messenger did I see how these three books fit together. The overlapping characters and themes make these great reads for older junior high and even adults. I despise those teachers who use these books in fourth and fifth grade classrooms. The students may be able to read the words, but they will not comprehend the idea of creating a utopia and the consequences inherent to that. Some adults can't truly "get" these books. The Messenger is a fantastic story that can be read and reread. I would highly recommend this book and the others mentioned above.

Published by Thriftbooks.com User , 18 years ago
I thought the book was beautiful. A lot of reviews here claim that it had a lot of unanswered questions but in all honesty, I don't have any idea what they mean. She manages to keep from focusing on Jonas and Kira too much, which I think is a good thing. The book is equally wonderful for those who have read the other two books as well as those who read this one first. I agree a bit that the ending did feel rushed, but looking back on it there weren't many ways for that to be different, really. Maybe a few tiny things could have been extended, but it would've been pointless. And while Lois Lowry doesn't directly come out and answer the questions posed by her books, that is generally the main point. Most of the answers are suggested in the general tone of the book, and answers are only hinted at. Thats what makes her books so great, I think. Overall, the book was *beautifully* written and a very good reflection on today's society, and everyone should read it.
Trustpilot
Copyright © 2022 Thriftbooks.com Terms of Use | Privacy Policy | Do Not Sell or Share My Personal Information | Accessibility Statement
ThriftBooks® and the ThriftBooks® logo are registered trademarks of Thrift Books Global, LLC