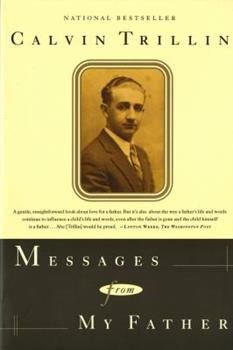 Messages from My Father: A Memoir

Calvin Trillin, the celebrated New Yorker writer, offers a rich and engaging biography of his father, as well as a literate and entertaining fanfare for the common (and decent, and hard-working) man. Abe Trillin had the western Missouri accent of someone who had grown up in St. Joseph and the dreams of America of someone who had been born is Russia. In Kansas City, he was a grocer, at least until he swore off the grocery business. He was given to...

Calvin at his best

Published by Thriftbooks.com User , 13 years ago
This is a lovely endearingly funny book. I read it in just an evening but I'm sure it's a book I'll go back to in the future.

The Gift of Love and Continuity

Published by Thriftbooks.com User , 14 years ago
Such is Calvin Trillin's caliber of work you don't realize how good he is, and he is really good. This book touched me deeply; Mr. Trillinsky was not an emotional man and given to the touchy feely sort of stuff so espoused these days, but he gave his son everything he would need to have a fulfilling life, one of the main components being a deep, abiding and unconditional love; how lucky Mr. Trillin was. My father was an evil and stupid man who never learned from his mistakes and is now reaping the whirlwind; I believe Mr. Trillinsky would have I.D.'d him in five minutes flat, and would have had mercy on him, much more than I can manage now. If you are raising a child, or trying to figure out what in God's green earth happened to you during your childhood, read this book. Mr. Trillin's artistry is a delicious extra. I have read "Remembering Denny" and it has seared a place in my mind since. It explained so much to me. This is another book that is going to go on my mental bookshelf, probably till the end of me.

It Rings a Bell

Published by Thriftbooks.com User , 16 years ago
I don't know anyone in the Trillin family personnally, but I recognize them very well. I learned something I didn't know--that Jews landed some place other than Ellis Island. As a father myself, I appreciate what Abe did for his son. So did Calvin.

Published by Thriftbooks.com User , 17 years ago
Humorist, journalist, food maven, the author of numerous books and a writer for The New Yorker, Trillin brings his blend of self-deprecating humor and thoughtful observation to this affectionate memoir of his father.Abram Trilinsky emigrated to St. Joseph, Missouri, from Russia at the age of two. When his wife hinted at a trip to Europe, his terse response was, "I've been." He was resolutely a mid-western American, a man who changed his name to Abe Trillin, and at the end of his life exhibitted the only prejudice his son ever observed - an impatience with "refugees," by which he meant people who clung to the language and customs of their country of origin.He was a stubborn man, like most of his family, described by his wife as "Mules!" "I sometimes imagined my father as swearing off things just to keep in practice," his son observes.He never swore although he collected colorful curses - "May you have an injury that's not covered by workman's compensation." His honesty was absolute - when a child turned 12 he paid full price at the movies even if he looked 9.He was unassuming. When Calvin was in high school, his father opened a restaurant and took to wearing yellow ties. "He said something about how most people don't stand out from the crowd, and how it helped to have a sort of signature." This seemed embarrasing to his adolescent son. "What was so great about having someone say, 'Oh, yes, Abe Trillin - the guy with the yellow ties'?" But years later at Abe's funeral, he's touched by how many friends asked for a yellow tie as a remembrance.His father was not a talker. One of his favorite jokes concerned a Jewish actor who finally gets a real part playing a Jewish father. The actor asks his father why he seems disappointed. " 'Of course I'm proud of you son,' " the father says, " 'But we were hoping you'd get a speaking part.' "Calvin writes, "What strikes me as odd now is how much my father managed to get across without those heart-to-hearts that I've read about fathers and sons having." Without it being talked about, Calvin knew his father was ambitious for him. "It was a given in our family that my father was a grocer so that I wouldn't have to be."One of their biggest arguments concerned Calvin's joining the Boy Scouts. He hated Boy Scouts but Abe regarded it as essential to American boyhood, a necessary step on the way to Yale, Trillin senior's university of choice, an idea he'd gotten from a novel read as a boy - Stover At Yale. Calvin went to Yale. Yale launched him out of Kansas City, never to return (also as Abe expected). The grocer's son would never be a grocer.In one (somewhat unrealistically) ingenuous chapter Trillin goes to a dinner of prominent writers and realizes that they all went to Ivy League schools as he did. Was there a connection? (Puleeeeze). "For the first time, I realized that my father's vision of how all of this was supposed to work out might not have been as simplistic as I had always assumed."This slim volume is dee

Published by Thriftbooks.com User , 25 years ago
Calvin Trillin is like a tall glass of iced tea after a hot day. His reporting style, perfected across the years in the pages of TIME and the NEW YORKER, is unlike any other in the field. A native Kansas City boy, he gives creedence to the idea of Mid-Western taciturnity, eschewing flowery prose or even artful structure to simply tell what he has to tell. In the case of his weekly column for TIME, that brevity of word only makes what he has to say even funnier. For proof, check out his collections (the recent "Too Soon To Tell") to remember that intelligence, humility and wit usually went hand in hand in the old days of reportage. Cross Edward R. Murrow with Garrison Keillor, and you've found Trillin. But even he has developed a beauty of style all his own. Now he turns his attention to that most painful and mushy of topics, the parent, in his superb new memoir "Messages From My Father," an observation from a grown son to his deceased patriarch. The memoir business has been burgeoning lately, with moving evocations of the past produced from such disparate writers as white- knuckled reporter Pete Hamill (A Drinking Life) to poet Mary Karr (The Liar's Club) but Trillin never calls attention to a plight or condition, never once opens up his family secrets for triage but instead pulls off the hat trick of talking about his father and his family while growing up in post-war America without a trace of false notes or cheap sentiment. Abe Trillin emerges from the book as a decent believer in the American Dream and its unbiased blessing on all the children of immigrants. Son Calvin looks at him honestly, his quirks (always wearing yellow ties, "swearing off" coffee without ever drinking it to begin with) his stubbornness and his enduring hope for his young boy; all topics of great drama, but rendered with good humor and genuine, clear-eyed honesty. Fathers and Sons have rarely been prodded in such a way to expose true feeling, instead of simple sentiment. Trillin, as always, reminds his readers to cut through the myths that cloud our judgments of our blood and ourselves and laugh. Maybe then, he hopes, we'll understand the myth of fatherhood a little more.
Copyright © 2020 Thriftbooks.com Terms of Use | Privacy Policy | Do Not Sell My Personal Information | Accessibility Statement
ThriftBooks® and the ThriftBooks® logo are registered trademarks of Thrift Books Global, LLC