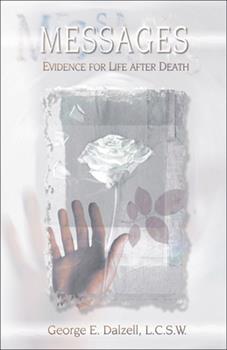 Messages: Evidence for Life After Death

If you had asked George Dalzell, a professional psychiatric social worker, a few years ago if he thought he'd be talking with the dead, he would have said, 'no way.' Yet, when his close friend Michael, an airline purser from Germany, was killed, things started happening that permanently shifted Dalzell's "perspective on reality." As a therapist, Dalzell had counseled people who claimed to hear voices. Now, Dalzell was hearing a voice himself, and...

Published by Thriftbooks.com User , 19 years ago
I was given messages when a co-worker caught me, in an unhappy state, reading 'the celestine prophecy' on my lunch break. She said if I wanted to read something a little more real, she had the perfect book. One week later, having breezed through Dalzell's well-written memoir I couldn't be happier. Books like 'Celestine' are in the practice of selling us spiritual ideas from fathomed locations with no real context. Dalzell is dealing with 'reality'. And while the topic is unconventional, it only takes several pages to realize not only do you trust the writer, but as for the story IT DID HAPPEN. This is a great book to read and experience. Also, it's one to keep on hand, for friends and family in times of need.

setting itself a part

Published by Thriftbooks.com User , 19 years ago
I was given this book by a co-worker by chance. She'd seen me reading the Celestine Prophecy and asked if I would like to read something a little more 'real'. While I didn't know what she meant at the time, I do know. And I'm so thankful she turned me on to Dalzell's Messages. Books like Celestine prophecy are importing ideas of spirit in a fictitious world; Messages is telling a story that deals with these issues in our world. I can't tell you how refreshing I found this book! While the idea of After death communication with the spirit of loved ones is a tough sell for some, the book is written with such honesty, that by several pages in you realize THIS DID HAPPEN. For people who value their friendships, family, loves, this is a great book. And a great book to keep. This is the kind of book a friend could use when in need, so keep it handy.

Published by Thriftbooks.com User , 19 years ago
> <br>George Dalzell is one of those rare individuals who meets his destiny with open-mindedness, love, and inner wisdom. His book and true account, Messages, reveals a remarkable journey through unexplainable experiences that lead him, and us, to the conclusion that life continues after death. His very close friend, Michael Keller, is killed suddenly in an auto accident, prompting George to reach out to Michael and ask him to show that he is alive and happy in Heaven. Through a series of funny, startling, and clearly unmistakable events, Michael does indeed come through to reveal his existence on the Other Side and his messages of love and hope to his family, friends, and co-workers. A psychiatric social worker by trade, George struggles with the evidence that continues to mount, realizing that the proof of Michael's life in spirit is just too real and specific to brush off as being hallucination or imagination. Messages is truly one of the most heart stirring adventures I have ever read, as the reader is taken through the experiences of George Dalzell as he proves to himself, Michael's family, and close friends that love is indeed forever and that our essence in Life never dies. It is one thing to speculate about what happens after death, and yet quite another to face the stark realization and personal proof that our hopes do come true, and that our loved ones continue to love us from the spirit world. I recommend this book highly to anyone who wants validation of their deep inner belief in the miracle of love and the hope that lives within us all. Our feelings of deep hurt and loss when someone close dies are only temporary, and someday, we will be reunited in joy and peace with those who graced us with their love on this side of life.<p>--Steven Richman (Denver, Colorado)

Published by Thriftbooks.com User , 20 years ago
After his friend, Michael Keller, was killed in an auto accident in Germany, author George Dalzell began "hearing" messages from Keller. As a psychiatric social worker, Dalzell had worked with patients who had "heard voices." He therefore began to question his own sanity. He wondered whether he was talking to himself, whether it was free association, or if he indeed had clairvoyant abilities. Some of the messages Dalzell received meant nothing to him, but when he spoke with Keller's parents in Germany, they took on meaning and were very evidential of life after death. Dalzell decided to attend a seance with a respected medium. Before attending the seance, Dalzell asked his discarnate friend if he would communicate a code word to him through the medium. The medium struggled with the German word but managed to get enough of it to convince Dalzell that the code word was indeed communicated. In another seance with another medium, Dalzell first contacted Keller's mother in Germany and asked her to try to communicae something to her deceased son and to ask him to relay it on through the medium. Dalzell did not want to know what it was, so that he could rule out mind reading on the part of the medium. Dalzell was amazed when he later told his friend's mother what the medium had to say, only to learn that one of the messages communicated was the one the mother had asked her son to relay on. The foreword of the book is by Gary E. Schwartz, Ph.D., author of "The Afterlife Experiments." Schwartz met Dalzell in February 2000 and was impressed with his honesty and openness, especially his willingness to put his reputation on the line by going public with his experiences.The book meets my "Four I's" test -- Interesting, Informative, Intriguing, and Inspirational. It would make a great gift for someone grieving the loss of a loved one.
Trustpilot
Copyright © 2022 Thriftbooks.com Terms of Use | Privacy Policy | Do Not Sell My Personal Information | Accessibility Statement
ThriftBooks® and the ThriftBooks® logo are registered trademarks of Thrift Books Global, LLC