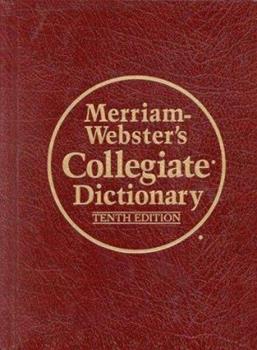 Merriam Webster is proud to announce the arrival of its most famous dictionary, now completely revised and updated. The features of the dictionary now include: 225,000 clear and precise definitions... This description may be from another edition of this product.

Published by Webster's college dictionary , 7 months ago
The wrong dictionary was sent and I am reordering a second time to see if I recieve the correct dictionary. The first dictionary was completely different and not what I actually ordered .

Published by Thriftbooks.com User , 17 years ago
Great reference and one that I keep on my shelf, next to "The Chicago Manual of Style" (15th edition) and "Gramatically Correct". Although the Scrabble world is still stuck on the 10th edition, that will likely change soon. Great coverage of definitions in addition to grammar and many other references. For college level and above, probably the one to buy.

Published by Thriftbooks.com User , 18 years ago
This dictionary, MW11 for short, may be the first to list bubkes, coscenarist, or MEGO. Entries now appear in a sans-serif font, basically an improvement, though the abbreviation for Illinois looks absurd.The cover claims 10,000 new words and meanings, including long ball, peloton, rabbit-eared bandicoot (who would seek that under r rather than b?), dance card, megapixel, qi, ki. So what is missing from the previous edition, MW10? An informal survey of a half dozen pages shows that practically nothing of value is gone (lonelily, pein, Daoist are deleted). Changes include a few new senses, illustrative quotes, revised definitions, and antedatings. The entry for -er now shows beautifuller with double l, in concord with the entry for -ful. There are about 70 more pages; MW10 had only about 5 more than MW9.The total number of entries should be greeted with skepticism. There are about a thousand undefined entries in a list of "non-" words, more than a thousand in the un- list, and several thousand more in sixteen additional lists. If it occurs to you to seek coscenarist in the co- list, these lists might be of use. There are also a great many highly technical terms, such as ethylenediaminetetraacetate(s); writings that might contain these are apt to contain quite a few terms not found in this or any similar dictionary. Nonetheless, MW11 looks pretty good after a comparison of a few random pages of this dictionary with the corresponding parts of four similarly-priced dictionaries. At least two competitors have such entries as blank endorsement, blankety-blank, terra alba, or blague, but most or all omit such MW11 entries as: term of art, blanket chest, or the adjective terminate. Recently I found the word Atropos in a 1950 New-Zealand/British novel; it's not in MW11 (except in atropine's etymology), but was found in the competitors; on the other hand, only MW11 offers an explanation of what people who quirk this or that in a (usually) British novel are doing.Definitions are sometimes a little unclear. The 85-word definition for gyroscope is apt to set your head spinning, and you may need to reread it to determine a gyroscope's purpose (I'm not sure it says). There's a sensible usage note for "hopefully", but MW11's appeal to "disjuncts" is less likely to persuade than the competitors' references to "sentence adverbs" or something similar. Many more illustrative examples would help.One appendix contains foreign words and phrases; it's unclear why "a la mode" or Weltschmerz are in the main listing with "a la page" or Weltbild in the appendix. Other appendices list biographic and geographic entries, so, confronted with an unfamiliar proper noun, you may be unsure where to look. Gretna Green, is that biographical or geographical? (Neither, but MW11 has it nonetheless.) These appendices suit the publisher, since during MW11's life there will be new censuses that affect the geographic entries and deaths, elections, awards, etc., that affe

One thing to think about

Published by Thriftbooks.com User , 19 years ago
I just had a brief comment on something many people probably don't think about when buying a dictionary.One problem with dictionaries, especially of English, is the problem of updating it for new words. English is particularly good, or bad, about this, about coming up with neologisms, and lexicographers routinely track new words to see if they have enough legs and staying power in use to become worthy of inclusion in the dictionary.This dictionary has the advantage of being updated every year, and new editions come out every few years or so, as opposed to the other much bigger dictionaries, although they often have supplements that you can buy.Most of us probably don't need to be that up-to-date on new words, unless one is really hung-up on slang, but it's one of the things that makes life hard for a lexicographer of English. Also, not all the new words are slang-related--many are techologically related--and those also get added to the language and change more and more quickly these days.

The original Webster's is still the best one!

Published by Thriftbooks.com User , 21 years ago
Noah Webster wrote the first American English dictionary in the 1806 and his name has come to be synonymous with the word "dictionary" in the US. As a result, every dictionary in the US that wants to make any sales calls itself a "Webster's."The M-W, however, is the original and still the best. I have every major American English dictionary in publication, and several British dictionaries, including the Random House, the Webster's 3rd (the unabridged dictionary), Microsoft's dictionary, the Oxford Dictionary, and several learner's dictionaries.Frankly, the differences among the top three,i.e., the M-W, the Random House, and the Microsoft (on CD), are not that great--choose a word like "efficiency" and see how each is defined. You might think they were all working together. That said, I have so say the M-W is still my favorite. Further, the M-W dictionary is consistently rated #1 in surveys of academics and language scholar.I am a professional language and test preparation instructor and rely on good dictionaries for precise definitions of words. The M-W consistently gives clear, accurate dictionaries and apposite examples. One extra feature that helps word lovers like me understand the words better is that M-W lists definitions in the order that they came into use, with the most recent usage last. This type of listing is extremely helpful for understanding how a word has evolved and what it is about that word that remains and what is not essential to the meaning. Such an understanding of words is essential for GRE and SAT preparation and is one of the main reasons I regularly turn to the M-W.In short, it's your best option for an American English dictionary.
Copyright © 2022 Thriftbooks.com Terms of Use | Privacy Policy | Do Not Sell My Personal Information | Accessibility Statement
ThriftBooks® and the ThriftBooks® logo are registered trademarks of Thrift Books Global, LLC