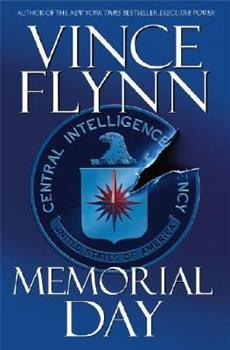 (Book #7 in the Mitch Rapp Series)

#1 New York Times bestselling author of American Assassin --soon to be a major motion picture Fighting terrorism on foreign ground, CIA superagent Mitch Rapp does whatever it takes to protect American freedom in this blistering political thriller from #1 New York Times bestselling author Vince Flynn. CIA intelligence has pointed to a major terrorist attack on the United States, just as the nation's capital prepares for a grand Memorial Day tribute...

Published by Missing pages , 3 years ago
Haven't read it yet. But going to give 5 stars because I love books on military stuff. Great stories, some sad and some happy. My husband is a US Navy veteran. To all our veterans out there. Thank you so very much for your service!!!!!!

One of the best!

Published by Randy Bowden , 3 years ago
Once you accept the fact that Mitch Rapp is what he is, this is one of the best books I have read in many, many years. (and I read over 100 books a year.) I won't go into detail for fear I will give away some plot line, but if you enjoy reading about the people employed by our covert governmental agencies, you will definitely like this book. Mitch Rapp is my new hero!

Published by Thriftbooks.com User , 15 years ago
Although liberals and the ACLU would no doubt be horrified by the tactics of our protagonist, Mitch Rapp, I firmly believe that the general population of readers will find themselves cheering his methods of extracting information as he attempts to track down a group of terrorists attempting to cripple the infrastructure of the U. S. and kill hundreds of thousands by setting off an atomic device in Washington D.C. (No more plot details from here on). My first Vince Flynn book, Term Limits, hooked me completely and I have been a Vince Flynn fan ever since. Once again, he has crafted a clever story that could easily have been taken from your daily paper. If you like complex, action packed thrillers featuring the most elite of alpha males, then Mitch Rapp is your kind of man, and Memorial Day is your kind of book.

Published by Thriftbooks.com User , 18 years ago
Although I had heard of Vince Flynn's series of novels featuring Mitch Rapp, MEMORIAL DAY is the first one I decided to take for a test run. What I found what an action-packed thriller set at a blistering pace and a main character that may not stay inside the box that the government would like for him to, but you like him anyway. You have to...he does things the way you'd like to see them done and he gets results. MEMORIAL DAY is also a prime example of the way that the CIA/Spy/International Thriller genre is headed in a post-9/11 world. In the 80s, the villians tended to be Russian. Now, the targets have become Al-Qaeda and those countries that harbor and support them. Not to worry...there are still plenty of Russian villians running loose in popular fiction. MEMORIAL DAY's premise begins with Mitch Rapp foiling an attempt to smuggle a nuclear weapon onto American soil, and right around one of the biggest tourist holidays on the calendar. This plot element alone makes the entire storyline plausible. This is something that every American citizen fears whenever there is a large event planned. New Year's Eve in Times Square...the Super Bowl...the World Series...name it. I won't go into any more detail on the plot...you'll just have to read it. I was very impressed with the writing as well. Sharp, concise, and to the point but not over the top vocabulary. Everything is organized well and easy to follow for any reader. All in all, I was very impressed with this very enjoyable read and look forward to checking out the rest of the Mitch Rapp series...not to mention the next installment.

This Political Thriller is a Novel for All Seasons

Published by Thriftbooks.com User , 18 years ago
MEMORIAL DAY, ironically enough, was the perfect book to read over the Fourth of July Weekend. It is as current as today's headlines, and a welcome break from the fantasies of hygienically challenged movie directors and the political aspirations of perfumed princes.Vince Flynn has made a career of writing espionage thrillers that read as if they could be subtitled "The Real World for Dummies." His creation, CIA operative Mitch Rapp (great name), is the type of guy you hope and pray exists and is on our side. Rapp is a pragmatist who is in constant trouble with everyone, from the President on down, because he consistently refuses to color inside the lines. If you've lost a wink of sleep over the fraternity hazing, locker room towel-snap to which a few Iraqi prisoners of war were subjected, you'll probably find Rapp's methods a bit extreme. But Rapp is that rarity, a guy who does what needs to be done in the most effective way possible. The fact that this behavioral aberration on his part results in him saving the country's bacon time after time never seems to enter into the equation, at least with those who tend to treat terrorist acts as grist for intellectual discussion and nothing more. The learning curve is temporary, and steep, for those folks; Rapp's approach is that he will go over them or through them if they do not get out of the way.Flynn and Rapp are at the top of their respective games in MEMORIAL DAY. Intelligence indicates that a major terrorist attack is in the offing. Rapp leads a daring --- and secret --- commando raid into Pakistan to take out an al-Qaeda vipers' nest. That is just the beginning of the story, however. Rapp and the Special Forces unit he commands discover plans for a devastating nuclear attack on the United States. Rapp acts quickly and decisively, and the attack is thwarted. Or is it? Rapp feels that there are some loose ends to the whole matter and, despite the best efforts of the career second guessers and pencil pushers who have the ear of the President, soon discovers that the plot is far deadlier than they thought --- and that it is still operative. Rapp leads a team in a race against time --- and against liberals in the President's cabinet --- to thwart a plot aimed at the very highest levels of government.Flynn demonstrates that he is an absolute master of his craft in every way that matters. His writing style creates a work that is built for speed; the pages fly by while the suspense quotient is ratcheted so high that it makes your hair hurt. The title of the book may be MEMORIAL DAY, but it's a novel for all seasons. Highly recommended. --- Reviewed by Joe Hartlaub

Published by Thriftbooks.com User , 18 years ago
Vince Flynn's books are essentially primers on what is needed to combat and defeat terrorisim and the "bad guys." It will not be everyone's cup of tea, because it is painfully honest in it's assessment of where our problems lie and unfortunately they often lie with some of us. If you genuflect to the altar of political correctness, this will be a tough read. Mitch Rapp returns. Flynn introduces him bluntly to those who have not read his prior novels as he prepares to interrogate five al Qaeda operatives who have been captured in a raid on a secret stronghold: "Calling Rapp a counterterrorism operative was essentially a polite way of ducking the truth. When everything was stripped away, the reality was that that he was an assassin. He has killed, and killed often, for his country, and in his mind 9/11 was proof that he hadn't killed enough."His interrogation produces the picture of a terrorist attack on the United States that involves a nuclear weapon. The picture is clear enough to cause alarm, but fuzzy enough to make the entire plan a puzzle. Slowly the puzzle seems to be solved and just when it looks like the threat is past, well, it isn't. This is vintage Flynn. It is an absolute page turner. It will make you think. It may cause some angst. It should. This is a realistic picture of where we are and what we are doing, both the good and the bad. That's where the angst comes in.

Published by Thriftbooks.com User , 18 years ago
Intel learns that countries harboring terrorists are transferring their stock and bonds into gold while at a top-secret installation a Pakistani terrorist is being interrogated by CIA black ops agent Mitch Rapp. Intel finds out that Al Qaeda is preparing to strike at the United States, making the World Trade Towers destruction seem like a child destroying a toy. Mitch and a group of commandos raid a small Pakistani mountain town where they find proof that Al Qaeda is getting ready to attack America.Going through the documents and the computer disks, Mitch and other operatives believe that the terrorist group is trying to smuggle a nuclear bomb into the United States. Through diligent effort and good investigative work, they are able to locate the bomb which was being shipped into the country by boat. Further Intel lead Mitch to believe that a second bomb has already been smuggled into the country and it is set to go off at the White House festivities on Memorial Day if Mitch can't locate it in time.Vince Flynn is one of the best writers of action thrillers on the world scene today. His protagonist is a true patriot, willing to get his hands dirty if it means saving innocent lives. He can't stand or deal with the politics that get in the way of catching terrorists and believes the legal rights belonging to ordinary people should be suspended for active terrorists. Readers won't know until the last paragraph if the hero finds the nuclear bomb and is able to prevent it from going off. MEMORIAL DAY is more frightening than a horror tale because the premise of the story is all too plausible.Harriet Klausner
Trustpilot
Copyright © 2022 Thriftbooks.com Terms of Use | Privacy Policy | Do Not Sell My Personal Information | Cookie Preferences | Accessibility Statement
ThriftBooks® and the ThriftBooks® logo are registered trademarks of Thrift Books Global, LLC