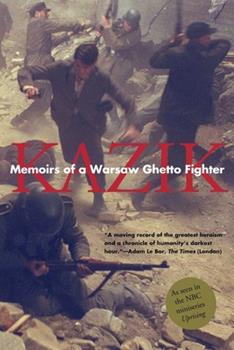 "In the first three days [of the Warsaw Ghetto uprising], the Germans didn't take a single Jew out of the buildings. After their attempts to penetrate the Ghetto had failed, they decided to spare themselves casualties by destroying it from outside with cannon and aerial bombings. A few days later the Ghetto was totally destroyed. . . . The 'streets' were nothing but rows of smoldering ruins. It was hard to cross them without stepping on charred bodies."--Kazik...

Published by Thriftbooks.com User , 12 years ago
The book was in brand new condition and better than i expected, plus the shipping was very prompt!! WONDERFUL!

The young man that survived

Published by Thriftbooks.com User , 16 years ago
Kazik was a 19-year-old Jewish lad who survived the Nazi terror and systematic mass killings of Jews, the Warsaw ghetto uprising of 1943 and the Warsaw uprising of 1944. He was also led many fighters out of the ghetto through the sewer, and he was responsible for the care of many Jews who were hiding in Polish homes. Kazik also managed to find shelters for his parents and his two sisters, and after the war he was one of the very few Jews whose parents were still alive. After the war, Kazik, his sister Raya and parents all immigrated to Israel. Kazik's other sister, Dina, was killed during the Warsaw ghetto uprising. Kazik didn't at that time know that his sister was in the ghetto. I found the book interesting and heart gripping at the same time. It is amazing to read how Kazik manages to stay alive, and always seems to stay one step ahead of the Nazis and their helpers. Kazik writes how he found one thing difficult when he arrived in Israel: When he told people that he was one of the very few survivors, it seemed like some almost blamed him for having survived. Kazik tells how people kept on asking him about people who had died, but never about those who had survived. This made him reluctant to talk about his past. He writes about how one man told him that he (= Kazik) screamed every night in his sleep. If Kazik had made a volume II about his life after the war, I surely would have read the book. His history is fascinating, and I hope his life was mainly a happy one after he immigrated to Israel. I liked this book, and I found Kazik's story very interesting. Kazik tells us that he is not much of a talker, and that it was therefore difficult to dictate this book to the writer. Kazik may not be a talker or a skilled writer, but his story is one it is hard to forget.

Published by Thriftbooks.com User , 17 years ago
Memoirs of a Warsaw Ghetto Fighter, written by one of the surviving members of the ZOB was a well-written account of not only life as a resistance fighter but also what life was like for the few that fought in the Warsaw Ghetto Uprising. This is an easy read and I would recommend it to anyone who is interested in learning more about this period and what the Jews and all victims of the Nazis had to endure.

Published by Thriftbooks.com User , 22 years ago
Being a decendant of a Holocaust survivor and also a Warsaw Ghetto survivor this book brough to life the pain struggle and courage that they all went through. This is one of the best books i have ever read and i would recomend it to anyone

Published by Thriftbooks.com User , 24 years ago
A terrific true story of one of the few survivors of the ZOB (Jewish Fighting Organization) It is very vividly told and I suggest you get it too.
Trustpilot
Copyright © 2022 Thriftbooks.com Terms of Use | Privacy Policy | Do Not Sell My Personal Information | Accessibility Statement
ThriftBooks® and the ThriftBooks® logo are registered trademarks of Thrift Books Global, LLC