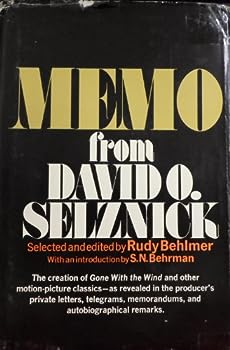 "The most revealing, penetrating book on filmmaking I know of . . ."--King Vidor David O. Selznick was a unique figure in the golden Hollywood studio era. He produced some of the greatest and most... This description may be from another edition of this product.

A fascinating page-turner for any hungry film student

Published by Thriftbooks.com User , 15 years ago
This is a hugely readable book covering the most prolific period of David O. Selznick's career helming pictures like KING KONG and GONE WITH THE WIND, among other important projects. This massive accomplishment (for a constantly busy, successful indy producer) has sometimes been ignorantly and unfairly dismissed by critics for being the memoir of a man who may have been using stimulants throughout his career and in particular while writing many of these long memos and therefore much of the content of the book. But let's say here and now that the quality and detail of the information in this large tome, as well as the quality of the man's movies speak for themselves -- a severely debilitating drug habit would have prevented the creation of a sensible book, let alone one with this power, detail, wisdom and insight. Every film student should read this book for his or her own benefit, to learn in detail the thought processes behind the hundreds of challenges and decisions involved in the mounting of major motion pictures by one important producer who was also essentially a studio head of his time. Things in Hollywood have changed in some aspects, but not so much that Selznick's tribulations and triumphs are any less valid, informative or fascinating for the discriminating reader.
Copyright © 2022 Thriftbooks.com Terms of Use | Privacy Policy | Do Not Sell My Personal Information | Accessibility Statement
ThriftBooks® and the ThriftBooks® logo are registered trademarks of Thrift Books Global, LLC