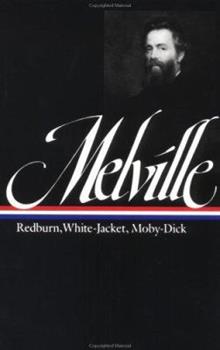 Well over a century after its publication, Moby-Dick still stands as an indisputable literary classic. It is the story of an eerily compelling madman pursuing an unholy war against a creature as vast and dangerous and unknowable as the sea itself. But more than just a novel of adventure, more than an encyclopedia of whaling lore and legend, Moby-Dick is a haunting, mesmerizing, and important social commentary populated with several of the most unforgettable...

Redburn and White-Jacket are well worth reading ....

Published by Thriftbooks.com User , 12 years ago
.... before taking on Moby-Dick. This review is not intended to sway anybody towards getting this volume for Moby-Dick. The reputation of this novel as the greatest of American literature, and its role in any number of academic courses, will pretty much decide whether someone buys it. For the record, Moby-Dick fully lives up to its reputation as a great, sometimes difficult and rewarding book. My suggestion is that going through Redburn and White-Jacket will make reading through Moby-Dick more rewarding, and this volume makes an elegant combination of the three. "Redburn" is a highly readable coming-of-age novel with a strong autobiographical component. The protagonists suffers repeatedly from inexperience on his trip across the Atlantic, finds crushing poverty in the port city of Liverpool and returns home rather beaten up and disillusioned. This story helped me get ready for the psychological struggles, as well as the gradually unfolding tragedy, of the major characters in Moby-Dick. "White-Jacket" was longer and took more of a concentrated effort to get through, but is an even better preparation for Moby-Dick and is an outstanding novel in its own right. The novice onboard the merchant ship of Redburn is replaced by the quiet and pragmatic survivor White-Jacket, who serves on a U.S. Navy vessel. The ways of the Navy had been rather primitive and brutal by the standards at the time, and Melville rails against the favoritism and corporal punishment in extended passages. The cast of characters is notably larger in White-Jacket than Redburn, and appear to represent actual figures in Melville's past as a sailor (Redburn seemed far more constructed as pure fiction). "Redburn" and "White-Jacket" are great books on their own, but in this volume they serve as complimentary lead-ins to the different dimensions of Moby-Dick. As with the other Library of America volumes I've read through, I benefited from going through the entire contents in order.

Moby-Dick, as my father once said, is one of the greatest novels ever written

Published by Thriftbooks.com User , 15 years ago
Melville is one of the greatest American authors ever, and Moby-Dick alone is worth the price for this book. When I read the book myself in american literature, I was amazed at the extensive detail taken into the culture of whaling, a culture that was in its twilight days; it also gave us more information about whales that some think is too much, but whatever. Even though I didn't completely understand the book (but so did everything I read in high school), I have the desire to read it again.

Published by Thriftbooks.com User , 21 years ago
While White-Jacket seems to have little overall relation to Melville's other works in the sense that it appears as a self-contained, highly enjoyable novel, Redburn is one of those central turning points in this great writer's life that makes it extraordinarily important. Forget "adventure" or "romance." This is a novel of psychological destruction, a disasterous novel of "growing up" that displays the shattering of a young mind and the destruction of "young America." Any reader who loves Moby-Dick should devour Redburn again and again as one of Melville's most important works.
Copyright © 2020 Thriftbooks.com Terms of Use | Privacy Policy | Do Not Sell My Personal Information | Accessibility Statement
ThriftBooks® and the ThriftBooks® logo are registered trademarks of Thrift Books Global, LLC