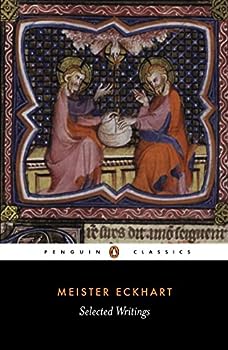 'A free mind can achieve all things. But what is a free mind?' Composed during a critical time in the evaluation of European intellectual life, the works of Meister Eckhart are some of the most... This description may be from another edition of this product.

"Love essentially resides in the will alone, so that whoever has more will, has more of love."

Published by Thriftbooks.com User , 13 years ago
I have not read anything by Eckhart before I read this selection by Oliver Davies for Penguin. I have since read by many that the Paulist Press collections are considered to be a better grouping. This does not surprise me, the primary purpose of the Penguins being a good introduction for the many people rather than designed to appeal to the scholar or expert. I found it a good first encounter, and there does not seem to be any criticism that the Davies is either misleading in what it collects or poor in terms of translation. This edition is broken into five main sections: The Talks of Instruction, The Book of Divine Consolation, On the Noble Man, Selected German Sermons, and Selected Latin Sermons. It also is published with an introduction by Davies to the major themes in Eckhart's thought, a note on selection and translation, a select bibliography (which I appreciated, and which seemed very helpful), and a Register of Eckhart's German sermons. The notes to the main text are included at the end of the book. I continue to wish to see notes in situ rather than at the end but I am apparently in the minority with this view. As a lay reader (by which I mean that I am neither religious scholar nor historian) I was reading the book for my own enlightenment and edification. I was most struck by Eckhart's ideas of the relationship between the soul and God, his view of time and timelessness, and the quiet repetition of the notion that a relationship to the Good comes from within rather than without. He rejects the importance of forms of worship and insists on an interior acceptance of self-love as a necessary precondition to the love of God and others. As callow as it seems to say, I found the book helpful. It kept me reading and thinking and I often experienced it as personally very moving. I particularly engaged with the selections from The Book of Divine Consolation. I would recommend both Eckhart in general and this edition in particular. I may myself circle back at some point to pick up the more complete editions. But this should be seen as credit to Penguin in providing the sufficient introductory experience rather than an expression of lack.

Published by Thriftbooks.com User , 14 years ago
If anything else, Eckhart is completely entertaining to read. This is an excellent selection of what may be his greatest and most compelling contribution to Christian mysticism--namely, his vernacular sermons! The introduction affords just enough context to get a taste of Eckhart's world, and I found Davies' translation both fresh and enlivening, as if I were sitting in a small audience filled with Beguines or other aspiring contemplatives, watching and listening to the Meister in the flesh, gesticulating and riffing extemporaneously off his vast store of classical learning. Don't expect Eckhart to stay true to the confines of Church dogma. He will never contradict Catholic teaching outright, even taking a few seconds to affirm it from time to time. But in the end and going further than any other theologian in his day and from the beginning of Christian theology, Echkhart weds - and without reservations - the context and language of Christianity with its scriptures along with the philosophy of Platonism. Many would argue that his attempts were a failure from the beginning, but I say, irregardless of Eckhart's overall successes or failures, it is truly amazing and worthwhile to witness such a courageous and almost reckless attempt at a truly needed innovation. Even if you find yourself disagreeing with his often radical conclusions, you will encounter a wonderfully contagious spirit, which is both cheery and boistrous - the perfect antidote to the long and boring sermons we so often force ourselves to sit through. Eckhart lived as he spoke, and paid for it in the end. The Church censored his message, and the great teacher left this world in infamy. Luckily Eckhart's writings, especially his sermons, are making a modern day comeback, and his value and unique contributions to Christian theology are even conceded by the Church today. If one would like a better comprehension of the Meister's intellectual landscape, I recommend Bernard McGinn's, "The Mystical Thought of Meister Eckhart."

The best single volume I have seen

Published by Thriftbooks.com User , 20 years ago
There are a lot of Meister Eckart books around, but this is the best I have seen. The introduction is especially illuminating. Oliver Davies dispenses with scholastic writings and materials related to the heresy charges, focusing, chronologically, on instructional works and sermons. The Meister Eckhart that emerges from these pages is one who, while taking good works and devotional practices for granted, is so immersed in the Christianized, Neo-Platonic inner life, that he appears, at times, totally unorthodox, at other times, wholly traditional. Reading him is a mind altering experience not to be missed. The translations are very good, and puzzling passages are annotated. References to ancient authors are likewise noted. As a side issue, several of the sermons contain glimpses of medieval scientific theory.

Published by Thriftbooks.com User , 22 years ago
This collection of writings by Meister Eckhart is one of the best. Collected without much bias towards him or against him, it is left to the reader to judge the writings (as opposed to books edited by Matt Fox, where he seems to say that one who doesn't believe Eckhart's writings must be a nut). Nonetheless, this intriguing book is filled with writings from the midevil mystic. A must have for all searching for the spiritual side of life.
Trustpilot
Copyright © 2022 Thriftbooks.com Terms of Use | Privacy Policy | Do Not Sell My Personal Information | Accessibility Statement
ThriftBooks® and the ThriftBooks® logo are registered trademarks of Thrift Books Global, LLC