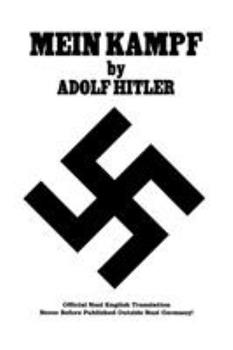 This official Nazi English translation of "Mein Kampf" is one of the rarest editions ever made.

Published by Andrea , 7 months ago
Ordered it in English, got it in German. Would appreciate an English copy or German lessons. Thank you

Came in the wrong language :(

Published by Joe Garcia , 8 months ago
I am giving the book one star because I ordered Mein Kampf (reviewing my order it says, "English" ) unfortunately it came in Spanish so i am unable to read it. Send me one in English!

Published by HistoryWatcher , 1 year ago
This book is super under read and it is by one of the most influential writers/orators of all time. This book gives almost a look at the "man behind the slaughter."

Published by Thriftbooks.com User , 19 years ago
Part biography, part party manifesto and part propoganda pamphlet, "Mein Kampf" ("My Struggle") is three volumes of a work first published in 1925 while the Little Corporal was just that, an obscure agitator serving a brief prison sentence for a failed coup (putsch) in Munich. Manheim's translation of "Mein Kampf" is perhaps the best one so far. He does an excellent job translating many of the German metaphors into English. Don't feel guilty about buying this book. Having it on your bookshelf doesn't make you a Nazi sympathizer. So go on, buy it, read it and remember that those who ignore history are condemned to repeat it.

Published by Thriftbooks.com User , 25 years ago
Adolf Hitler was one of the most loved and hated men of the20th Century. In "Mein Kampf" we learn about the author'schildhood, the collapse of Germany in 1918, the founding of his National Socialist German Worker's Party and the abortive Beer Hall Putsch of 1923 which sent Herr Hitler to Landsberg Prison where he wrote his famous book. The author goes into detail on policy questions which will later be realized just before and during the Second World War. The book is said to be very prophetic in that sense. Any rumors of the difficulty in reading the work are false; it is easy to read and highly interesting. In short, this book is a must for those wishing to gain a more thorough understanding of German National Socialism and its creator.
Trustpilot
Copyright © 2022 Thriftbooks.com Terms of Use | Privacy Policy | Do Not Sell or Share My Personal Information | Accessibility Statement
ThriftBooks® and the ThriftBooks® logo are registered trademarks of Thrift Books Global, LLC