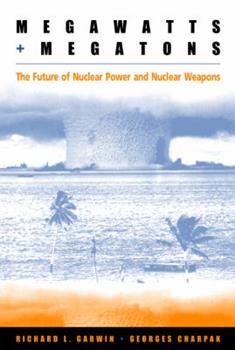 Megawatts and Megatons: The Future of Nuclear Power and Nuclear Weapons

In Megawatts and Megatons, world-renowned physicists Richard L. Garwin and Georges Charpak offer an accessible, eminently well-informed primer on two of the most important issues of our time: nuclear weapons and nuclear power. They begin by explaining clearly and concisely how nuclear fission and fusion work in both warheads and reactors, and how they can impact human health. Making a strong and eloquent argument in favor of arms control, Garwin and...

Fantastic Introduction for the Intellectual

Published by Thriftbooks.com User , 13 years ago
For me this was a required text for a college course on nuclear proliferation, terrorism, and energy. I can honestly say that if you are a person with a significant scientific background you will enjoy this read. The authors (Charpak and Garwin) present facts about all areas of nuclear issues. The authors explain in detail about past, current, and future nuclear power generation and its impact on the human race. In addition they go into detail on the upsides and pitfalls of nuclear versus fossil fuel energy production. In the same regard the authors discuss the past, current, and future of nuclear weapons. The authors provide a detailed schedule for nuclear disarmament, which they really mean as a dwindling of nuclear arms. The authors do a fantastic job of explaining the effects of nuclear power production and nuclear weapons on human life. The fact that the catastrophe at Chernobyl had far less impact on human life than mainstream media would have you believe was interesting. All in all the authors provide an incredible amount of information on the past and future of nuclear arms and nuclear power. Negative reviews of this book are most likely from people who do not understand the vast amount of math and units used in this book. The authors do their best of explain Sv, eV, MWe, and other units, but if you do not have a basic understanding of physics and SI units you may find this book difficult to understand. To the scientifically inclined - enjoy this read and understand that nuclear power will play an integral role in our future as is the curbing of our dependence on nuclear weapons as our supreme power in the world.

Published by Thriftbooks.com User , 13 years ago
This book manages to be informative without being boring. I highly recommend it if you are interested in nuclear technology, nuclear proliferation, history of 20th century, international relations and national security issues.

Published by Thriftbooks.com User , 15 years ago
In Megawatts and Megatons, Garwin and Charpak collaborated on an excellent description of nuclear power and weapons, starting with discussions of nuclear physics and energy, and ending with a narrative of post WWII international relations, centered upon arms control and prevention of use of nuclear weapons. The authors have strong opinions on the proper use of nuclear energy and the means to reduce dependence on nuclear weapons, as one would imagine from two scientific practitioners. As such, they have presented a well-developed argument that aims to convince the reader that the U.S. should modify its energy and nuclear weapons policies to reduce the threats of global warming and nuclear contamination as well as nuclear conflict and terrorism. Unfortunately for the layman, the technical nature of the first portion of the book may make difficult reading for the reader without a background in science or engineering, although the authors do make an effort to describe the concepts so that the non-expert may understand. I recommend this book for anyone with an interest in the technical description of nuclear power and weapons, nuclear policy, and recommendations new policy directions.

Drop the politics and increase the economic sensibilities...

Published by Thriftbooks.com User , 17 years ago
While I appreciate the discussion on nuclear arms I don't think it needed to be at the length the authors took it. And while I really enjoyed the discussion on nuclear power I was disspointed that the authors took great care to detail and expound ideas (Rubia's for example) at the expense of other economical and safe technologies (Gen III+ and IV LWR for example). There was no reason not to expand on the the available, decades-proven, and economical designs of today. Basically what I'm thinking is they could've done better to discuss evolutionary designs as opposed to completely new (relatively speaking) concepts. Either way it's a great book, -Ali

Published by Thriftbooks.com User , 20 years ago
Although its authors fail to recognize that worldwide oil+natural gas extraction will certainly peak before 2015, this book is very timely. Garwin & Charpak write (p. 246) "We believe that one of the highest duties of society as a whole is to assess and to choose its destiny. In this book our goal is less to prescribe than to inform our readers of the options as we see them ... In considering nuclear energy we do not in any way intend to denigrate other approaches to providing for the needs of society -- including renewable energy, improved efficiency to reduce energy needs, and the like. Nevertheless, all these options will have direct and indirect effects on the environment." Nuclear power for electricity generation is one of their threads, the other is weapons and arms control which Garwin has worked on for many years mostly to point out the futility of defense against weapons not delivered by missiles and against missiles after decoys are deployed.The book compares the success of nuclear power-plants in France (where reactors produce 80% of the electricity) with the perceived failures in execution in the US. The authors consider both direct (once through) disposal and reprocessed fuel cycles, outlining costs in energy and radioactivity release of both, and the mixed French experience with reprocessing and breeders. They note that advanced reprocessing has the potential to reduce waste volume and long-term radioactivity, at the expense of doubling release today (p. 198). They advocate research into uranium separation from sea-water, noting that early experiments are very promising that this can meet growing power needs for hundreds of years. Of course, what we really need are about 40 years of growth to bridge the world to a mix of fully sustainable electricity sources and to take up the growing slack from declining oil+natural gas. The authors first consider the bridging contribution of coal, arguing (p. 232) that CO2 sequestration is certainly feasible at the cost of reducing power-plant net energy output by 30-50%. Coupled with oil+gas decline, sequestration would reduce anthropogenic CO2 generation to levels well below the lowest 2100 projection of the IPCC (perhaps explaining the seemingly comatose response of Cheney/Bush to the Kyoto process). They discuss reactor concepts like the inaccurately named "energy amplifier" sub-critical, accelerator assisted thorium concept of Rubbia, but less discussion of nearer term developments such as the pebble bed modular reactors that seemed until 4/02 to be on track in South Africa. Both approaches are said to attain passive safety. If such designs are not debugged urgently, we will have to depend on expanded use of derivatives from technically "ancient" light-water reactors derived from submarine power-plants.The authors also discuss opportunities for terrorists to divert enriched fuel from reprocessing and waste disposal, and note how attractive disposal sites will be for future warriors after al
Trustpilot
Copyright © 2022 Thriftbooks.com Terms of Use | Privacy Policy | Do Not Sell My Personal Information | Accessibility Statement
ThriftBooks® and the ThriftBooks® logo are registered trademarks of Thrift Books Global, LLC