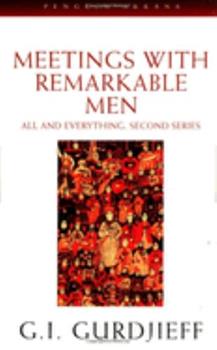 Meetings with Remarkable Men: All and Everything, 2nd Series

(Book #2 in the All and Everything Series)

Meetings with Remarkable Men , G. I. Gurdjieff's autobiographical account of his youth and early travels, has become something of a legend since it was first published in 1963. A compulsive "read" in the tradition of adventure narratives, but suffused with Gurdjieff's unique perspective on life, it is organized around portraits of remarkable men and women who aided Gurdjieff's search for hidden knowledge or accompanied him on his journeys in remote...

Published by Thriftbooks.com User , 4 years ago
Gurdjief boasting how he tricked people to make some bucks. There is hardly anything useful in this book. He is busy advertising his next series of books in between the stories. All the remarkable people in this book are normal folks. Utter waste of time, in my humble opinion!

Published by Thriftbooks.com User , 14 years ago
Meetings is an eloquently written story about the travels and experiences of Gurdjieff. Their are some great stories woven within that are like teachings to those who can read between the lines. It is a swift, fun read that I would recommend even to people who are unaware of the work of Gurdjieff.

A must read for any serious student

Published by Thriftbooks.com User , 20 years ago
This is the most accessible of Gurdjieff's works and should be read by any student of the "essence of reality" or "timeless wisdom," concepts that can't be articulated without sounding like cliches. For this reason I give it five stars.As mentioned by other reviewers, Gurdjieff is a master of "coyote wisdom." In the American Indian tradition, the coyote, as totem guide of a Shaman, is a trickster and there was none better than Gurdjieff. My most vivid recollection is a story about his teaching center in France where he was adulated by an obsequious woman. He picked up an iron bowl from the fire and told the woman, "Here, hold this." Her shock and pain may or may not have awakened her consciousness, but the technique is vintage Gurdjieff. I have met a number of serious students of Gurdjieff in my 60 short years and they stand out as having significantly more depth than most students of non-traditional paths. Recommended.

Published by Thriftbooks.com User , 21 years ago
This book changed my life, or at least the way in which I thought about my life. I first read this book when I was in my late twenties (25 years ago). I didn't know what I wanted to do and had great lack of confidence that I could ever achieve much of anything. I was a mess. This book gave me the courage to go forward and not worry about "failure." I got that my mind was inherently capable of figuring "it" out and overcoming obstacles to achieving goals that I set for myself. So far so good. I'm basically a one-handed person who has accomplished my dream of creating beautiful art -- as a jeweler! Go figger! Needless to say, there were a few obstacles on my path.Read it, you'll like it. At the very least, it's a good adventure story.

A tutorial for becoming a remarkable man

Published by Thriftbooks.com User , 22 years ago
A book that without doubt has the potential to inspire the reader to live consciously and purposefully. The stories of Gurdjieff's life is put forward in a very simple manner and yet allowing a powerful pattern of encouragement to emerge. Each chapter stands independently able to enlighten and entertain. Gurdjieff shows that the path to an ultimate aim is not straight but rather filled with al kinds of obstacles and delays. While emphasising the struggle to achieve, the seeker of truth provides also the answer on how to overcome obstacles. The teacher shows that sometimes survival requires ingenious solutions and at other times shrewd and calculated plans. Attainment requires the influence of resourceful people with inner qualities rather than external presentation. Gurdjieff demonstrates the inner qualities of people who know how to be restrained in the manifestations that proceed from their nature while conducting themselves justly and tolerantly towards weaknesses of others. The ultimate aim is to enlighten the reader of the inner qualities that constitute remarkable men. Gurdjieff succeeds to develop in his readers the desire to become remarkable men themselves. Men that will on their turn influence the rest of the lives of all they interact with. Ultimately the book aims to transfer an experiential understanding of what Gurdjieff, as a teacher, expect from his pupils as a result of his teaching.

An interesting way of thinking

Published by Thriftbooks.com User , 23 years ago
Overall, this book is fascinating reading for anyone. In particular, the chapter (60 plus pages) on "The Material Question" struck a note in me in the early 1960's and has resonated throughout my life and mind ever since. Taking it exactly as he presented it, I applied myself to this way of thinking, fully focusing on everything surrounding me. I opened my first small business and went at it with a perseverance and determination learned from Gurdjieff. I never looked back, and consider that one short novel of a chapter to have been the greatest influence on my material success.olafaye
Trustpilot
Copyright © 2022 Thriftbooks.com Terms of Use | Privacy Policy | Do Not Sell My Personal Information | Accessibility Statement
ThriftBooks® and the ThriftBooks® logo are registered trademarks of Thrift Books Global, LLC