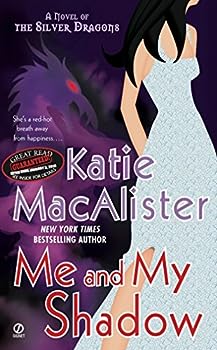 Me and My Shadow (Silver Dragons, Book 3)

This description may be from another edition of this product. Dragon lovers, doppelgangers, demon lords and a host of other delightful characters abound in Me and My Shadow as Aisling Grey creator Katie MacAlister pulls out all the stops in an adventure filled...

Published by Thriftbooks.com User , 11 years ago
I will have to disagree with some of the comments. And yes publishing houses are demanding that authors churn out book like bakery loads. More than 1 book per year, max two is too much, and although most of these books are less than 300 pages long, a slower pace could bring quality back. I actually liked "Me and my Shadow" for the very reasons others disliked it. These series was less about romance and more about relations, transformation, humor, fantasy and action falling in a different genre. In this last book May further transforms from the shadow slave into a free individual on her own. The love/attraction for the Dragon Gabriel grew, "humanized" May, and empowered her to seek her individuality, no longer satisfied with just being a shadow. Even if the motives of neither Gabriel nor May to get initially together were not honest, their relationship and love was born from the initial lust and the selfish Gabriel's motives. Gabriel gave her what she wanted most: to be cherished and loved for what she was, and for what she became. The shard that she feared was the most surprising of all. The sex scenes did not lack humor or steam, and for sure did not lack imagination. Wow! The fact we get to see some more of prior characters make it even more appealing. We see the circle expand and we are able to visit with old friends and meet new ones. i.e. Ash and Drake and future family, we meet new players, and solve old riddles and are presented with new ones. Black is grey, and white is tan. Magoth, the now ex- demon lord with his incredible arrogance, conceit and other bad traits keeps things going and fresh. He is the man-demon-thing who cannot take no for an answer, who might lost most of his status and power but not an ounce of conceit or evil, and whose actions always elicit a good laugh. Without May`s inner struggle with her unwelcomed Magoth's ongoing sexual attraction, the story would have been less real a and not so funny. Jim, the demon dog, whose wry humor kept me laughing, should be a guest in books to come. He is one of the best side kicks ever: doggie, cute, sassy, a bit crass and with just enough evil to make him even more likeable. His comments are just too sweet, wicked and to the point...Ouch!!, and he just cannot keep his mouth shut. But best of all, he just loves being a dog and wants to stay as one. As for the ending was not bad while it gave us some closure it presented new possibilities, and why not? Waiting can be fun too. Ms. Macalister's new direction in writing, one that might diverge from heavy romance while not ignoring it completely, targets a wider audience, one who wants fantasy, action and romance and more in the books they buy. Ms. Macalister follows a less traveled path; one that is being tested by other writers with some success and is developing into a genre of its own. It is an intelligent mix of noir, fantasy, steampunk, action, and with characters who are complex and flawed, less predictabl

Me and My Shadow

Published by Thriftbooks.com User , 11 years ago
3rd book in the silver dragon series, and proved to be the best thus far!

Published by Thriftbooks.com User , 11 years ago
This is a great story of adventure, birth, life, love, demons, fights, and just all the nonsense that is such a great relief from everyday life.

Published by Thriftbooks.com User , 12 years ago
Doppelganger May Northcott has two major issues that could keep her from her beloved wyvern mate Gabriel. First she has a dangerous dragon shard inside her heart and second she remains in indentured servitude to sexual predator former demon lord Magoth. However, while the loving couple struggles with her delicate conditions, the lethal black dragon Baltic has apparently come back to life. No one in their right mind trusts Baltic, so though he is PLAYING WITH FIRE and risking everything GOING UP IN SMOKE Kostya the black dragon demands a council showdown. While every creature jockeys for position, a pregnant Aisling Grey and her mate Drake await the birth of their child. The latest Silver Dragons entry is a fabulous urban fantasy as everything even to a degree the storyline seems out of control, chaos lives in the heart of Katie MacAlister's saga. The story line is fast-paced form the onset and never slows down as Gabriel struggles to keep his beloved at his side and safe while the dragons are heading towards an encounter with a neat twist. Fans will enjoy visiting the chaotic charming world of Ms. MacAlister where the unbelievable becomes believable. Harriet Klausner

Published by Thriftbooks.com User , 12 years ago
This edition to the Silver Dragon Series is as funny, outlandish and just plain fun to read as all of the others! It is a quick, light read and the main character, Mayling has really grown "up". I love Jim, the 6th class demon in dog form...totally amusing...his comments actually had me laughing out loud. Magoth reminds me of a couple of guys I dated ...who thought they were "all that". Katie MacAlister has a great writing style full of wit, humor and charm. Read them all, but read them in order!
Copyright © 2020 Thriftbooks.com Terms of Use | Privacy Policy | Do Not Sell My Personal Information | Accessibility Statement
ThriftBooks® and the ThriftBooks® logo are registered trademarks of Thrift Books Global, LLC