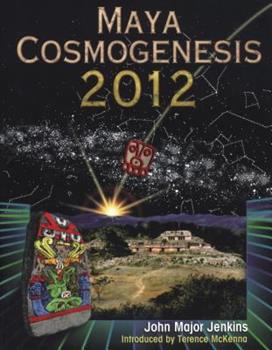 Maya Cosmogenesis 2012: The True Meaning of the Maya Calender End-Date

While researching the 2012 end-date of the Maya Calendar, John Major Jenkins decoded the Maya's galactic cosmology. The Maya discovered that the periodic alignment of the Sun with the center of the Milky Way galaxy is the formative influence on human evolution. These alignments also define a series of World Ages. The fourth age ends on December 21, 2012, when an epoch chapter in human history will come to an end. Maya Cosmogenesis 2012 reveals the...

Published by Thriftbooks.com User , 15 years ago
John Major Jenkins has looked into the question of why the Maya ended their 13-baktun cycle in the Gregorian year 2012, and has researched the matter in incredible detail, and comes to conclusions that result from detailed study of many archaeological and specialist works. His study shows that the Maya deliberately targetted this point in time as the end of the cycle, and the evidence is found in king-accession rites, mythology, architecture, and the ball-game. As you will know if you've read other reviews, the reason is the alignment of the winter solstice sun with the galactic equator - an event that happens only once in a cycle of precession - around 26,000 years. This IS NOT the "alignment of the solar system with galactic centre" or any of the other misrepresentatations of his work that have appeared. This work stands whether or not anything noticeable happens in the years around 2012 - the fact is, that the Maya predicted that something would happen around 2012. This has become evident since the publication of this book, since the Tortuguero prophecy entered the public domain. In April 2005, the existence of Tortuguro monument 6 was revealed, (though known to a few specialists before that). The stela gives the end-date 4 Ahau, 3 Kankin, 13 Baktun (a combination of 3 calendars that gives the 21 December 2012 date) and gives an accompanying prophecy of the return of the Nine Gods.

Published by Thriftbooks.com User , 21 years ago
The Earth spins on an axis. Like everything else that spins, it wobbles. That wobble is technically called precession, and it explains why Earthlings have seen the sun rise against different constellations over the centuries. In his latest book, Maya Cosmogenesis 2012: The True Meaning of the Maya Calendar End-Date, John Major Jenkins explains how the Maya mapped the movements of the Earth, including precession, and incorporated their measurements into their calendars. Jenkins, who has researched Mesoamerican cosmology and calendrics since 1986, has written five other books and numerous articles about the Maya. In Maya Cosmogenesis 2012, he ties together Mayan mythology and astronomy in a scholarly discussion of the source and meaning of "end date" indicated by the Long Count calendar. He supports his theories with nearly 200 line drawings, and provides extensive appendices, end notes, and a comprehensive bibliography. Each "wobble" (or precessional cycle) lasts 25,800 years. Researchers believe that the current precessional cycle will end in the year 2012. This date is known as the "End-Date" in Maya calendrics. At that time, the Earth will begin a new cycle in the opposite direction. Jenkins says his focus is "on how the precession of the equinoxes was mapped and calibrated among the ancient civilizations." He adds that his book "is devoted to exploring the Maya's understanding of the 2012 end-date and the philosophy and cosmology that go with it. This is a book about cosmogenesis, the creation of the world. The Maya believed that the world will be reborn, in a sense 're-created,' in the year we call 2012." What does all that mean? Will humans survive cosmogenesis? Jenkins thinks we will. He says the end-date marks the beginning of a new and better world. He believes that "what looms before us is a great opportunity for spiritual growth, both individual and planetary." Others, of course, disagree, and foresee a time of cataclysmic destruction. Regardless of whether they see the predicted end-date as a non-event, as destructive, or as an opportunity for growth, readers will find Maya Cosmogenesis 2012 a fascinating book. Astronomers and students of cosmology and mythology will especially appreciate Jenkin's research and thorough documentation.

Excellent blending of academic and spritual

Published by Thriftbooks.com User , 23 years ago
John Major Jenkins ties together many threads of Mayan cosmology/spirituality/teachings in a way that will satisfy those who value true academic scholarship. A landmark book that we Westerners can read, while the traditional Mayan daykeepers, priests, and h'men tucked away in the recesses of the Maya lands keep bits of this wisdom in their hearts and traditions.

With his better than academic decoding...

Published by Thriftbooks.com User , 23 years ago
With his better than academic decoding of the mysterious Maya glyphs that incorporate both their colorful mythology and sophisticated astronomy, John Major Jenkins has validated that shamans, with their out-of-body clairvoyance, were responsible for the amazing accuracy of Mayan and other Mesoamerican calendar systems that cover thousands of years of earthly, planetary, and galactic motion. That Mayan deities represent astronomical bodies, as did the pantheons of Egypt and Mesopotamia, is equally validated by Jenkins. His emphasis on the famous Long Count calendar shows that when the rising sun on the December solstice of the year 2012 conjuncts with the Milky Way's galactic center - or birth canal of the Great Mother of us all - a new age is expected, one in which humanity will mutate spiritually into a new relationship with space-time and the material universe.
Trustpilot
Copyright © 2022 Thriftbooks.com Terms of Use | Privacy Policy | Do Not Sell My Personal Information | Cookie Preferences | Accessibility Statement
ThriftBooks® and the ThriftBooks® logo are registered trademarks of Thrift Books Global, LLC