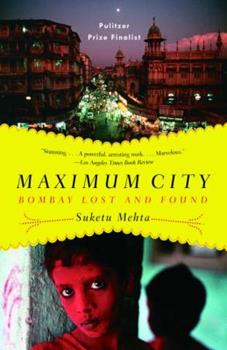 A native of Bombay, Suketu Mehta gives us an insider's view of this stunning metropolis. He approaches the city from unexpected angles, taking us into the criminal underworld of rival Muslim and Hindu gangs, following the life of a bar dancer raised amid poverty and abuse, opening the door into the inner sanctums of Bollywood, and delving into the stories of the countless villagers who come in search of a better life and end up living on the sidewalks...

Inspecting the bowels of Bombay

Published by Thriftbooks.com User , 15 years ago
The first 7/8th of this book was terrific with Mehta's intimate survey of mostly the seamy underside of Bombay: Hindu Nationalists/fascists, gangsters, murderers, courtesans, crooked (and decent!) police... even the Bollywood film industry gets examined - Bollywood appears to be far closer to organized crime than to Hollywood. The final eighth of the book kicks into overdrive, however, after Mehta declares that he's tired of talking to murderers and instead follows a wealthy Jain family to their complete renunciation of the material life, shedding all their wealth and possessions to become wandering ascetics with nothing more than begging bowls. This part of the story begins in urban Bombay as the family starts the process and culminates in an amazing series of ceremonies and celebrations in rural Gujarat, at the end of which 35,000 guests are fed, the ascetics distribute the rest of their wealth, have their heads shaved and hit the road with their begging bowls in hand. Wow!

Published by Thriftbooks.com User , 15 years ago
I've been living in Mumbai for about three weeks now (on a 6 month stay) and I began reading this book once I arrived in India. I just finished a couple of nights ago. Thanks to this book, I can read the local section of my daily newspaper from politics to crime to Bollywood, and the intersection of all three, and actually understand a bit more about what is going on (sadly, justice is so slow here that the people being tried for the 1993 bombings are only just now being sentenced). I can see a slum or pavement dwellers and have a better sense of the stories of the people. I can comiserate with everyone else stuck in traffic, and soon, once the monsoon ends, with everyone else breathing the dirty air. With Mehta being a return resident to the city, his perspective seems to be halfway between mine as a foreigner and that of a native who never left. It rambles at times, but so does life. Remember this is non-fiction. It's an excellent perspective for anyone who plans to spend any time here and I highly recommend reading this book if that's the case.

Published by Thriftbooks.com User , 16 years ago
I was Suketu's classmate in Mc Clancy in Queens, NY. He book is just as gritty and frank as his character when he stood upto bullies who mercilessly attacked us due to the Iranian hostage crisis. His 500 page anecdote about my city of birth is riveting and refreshing. After all the title " MAXIMUM" is a punch line for a city where infact the world's center of gravity is shifting towards it, with all the outsourcing. Suketu's courage in facing upto the hoodlum , Bal Thackery, in instigating the riots which there after ravaged the city, is true to his intuitive insight back in 1980 in a small Indian restuarant in Queens where he was talking to me about this menace.Suketu deeply touches on all the subtle rhythms of a fast moving city where most have lost their moral compass but it still focuses in detail of Mumbai's contours which sets a precedent fo all mega cities of the future. For those who do not like this book , I would like to quote Mark Twain: " It is better to keep your mouth shut and appear stupid , than open it and remove all doubts." I know most folks love a dumbdown simpleton version of things, but Suketu makes the words dance with his infatuation with this " MASALA" city.

Published by Thriftbooks.com User , 17 years ago
Mehta returns to Bombay after 21 years abroad and provides an intimate and jarring exploration of the different layers of Bombay society as he sojourns through the city. What make this novel compelling is the characters Mehta describes--members of the criminal underworld, a bar dancer, Bollywood stars, a police detective, and Jain monks among countless others. The reader discovers how often the lives of these seemingly disparate groups intersect--for example the ties of Bollywood stars to the gangsters. Mehta also provides a broader commentary on the human condition and how individuals use hope to survive in Bombay or for that manner in any overpopulated metropolis, Mehta writes, "a city is an agglomeration of individual dreams, a mass dream of the crowd...[t]he reason a human being can live in a Bombay slum and not lose his sanity is that his dream life is bigger than his squalid quarters. It occupies a palace."

Published by Thriftbooks.com User , 17 years ago
It was with great delight when I found by accident this sizeable book on Bombaby. My delight only increased when I started to read. Suketu Metha was taking me into a world that I had long wondered about but had never been able to visit. His book, Maximum City, is easily the best book on 20th Century India that I have ever read. It is not written as a typical travel book. The format is to take major aspects and dominant personalities of the city and give them each a detailed, richly woven chapter. You'll learn about the quirks and numerous pitfalls of Bombay housing and how the Renter's Act has made everything much much worse. You'll meet the head politician who seems to view Bombay as his personal fiefdom. You'll meet an amazing police detective who is unique on the police force in that he is the only one who won't take bribes, and you'll even sit in on a number of torture sessions of criminals. You'll meet a whole lot of people who kill people for hire, as well as members on police force who kill criminals because the courts didn't do their jobs of prosecuting them (that reality was drop jaw amazing). You'll meet some of the top women in the Bombay beer bar/sex scene, as well as an engineer who gave up a promising career to become a poet living on the Bombay footpaths. The list goes on. As I read this book, I was amazed at the people that Metha got to agree to give him a good chunk of their time, allowing him to develop a vivid flesh and blood portrait. To top it off, he is an amazingly good writer, who has a great sense of humor (I guffawed out loud several times as I read this book) while casting an unblinking eye on filth and corruption so deep that you feel like you're going to choke on it. Maximum City is truly a fascinating book to read. Anyone who is interested in either India or the phenomenon of the modern city can't help but love this book.
Trustpilot
Copyright © 2022 Thriftbooks.com Terms of Use | Privacy Policy | Do Not Sell or Share My Personal Information | Accessibility Statement
ThriftBooks® and the ThriftBooks® logo are registered trademarks of Thrift Books Global, LLC