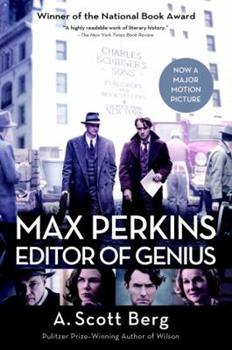 The National Book Award winner from Pulitzer Prize-winning author A. Scott Berg is now celebrating its 40th anniversary. The talents he nurtured were known worldwide: F. Scott Fitzgerald, Ernest Hemingway, Thomas Wolfe, and numerous others. But Maxwell Perkins remained a mystery, a backstage presence who served these authors not only as editor but also as critic, career manager, moneylender, psychoanalyst, father-confessor, and friend. This outstanding...

Published by Thriftbooks.com User , 16 years ago
This is a wonderfully written book, very informative and inspiring for authors, editors, agents and anyone else involved or interested in publishing. Berg does a terrific and subtle job of painting these larger than life characters, allowing their own letters to speak for them. He shows remarkable restraint and good taste and yet has created a book that is enriching and very difficult to put down. Highly recommended!

A. Scott Berg: Author of Genius

Published by Thriftbooks.com User , 20 years ago
Max Perkins: Editor of Genius is one of the best non-fiction titles I've read in a long time, and will likely be one of the best books I'll ever read. Berg (with the help of his own editor) truly is a genius: he pulls us directly into the story, introducing us to Scribner's Max Perkins at the zenith of his editorial career, then plunges us into his first acquisition -- F. Scott Fitzgerald's The Beautiful and Damned -- before taking us, methodically, through Perkins's life. An intrepid biographer, Berg tells us only what we need to know about Perkins's early life, getting to the good stuff: his discovery of Fitzgerald and Thomas Wolfe and his work with Ernest Hemingway. We also find out about Perkins's work with other remarkable authors, including Marjorie Kinnan Rawlings (The Yearling), S.S. Van Dine (the Philo Vance mysteries), and Arthur Train, creator of the mythical DA Ephraim Tutt. I laughed out loud at the story about how many believed that Tutt existed after the publication of his "autobiograhpy," complete with photos.We learn of Perkins's patient relationship with the frustrating Thomas Wolfe, a mammoth talent and physical specimen who could not contain his own enthusiasm. Berg suggests that, as Perkins discovered, Wolfe wasn't writing "books," he was writing one book, which would have encompassed thousands of pages if he had not died early -- a profound insight into the heart and soul of a dynamic author.We learn much of Papa Hemingway as well, including some insights into the macho author's home life. Elements of Hemingway's unpublished fiction suggest that the bullfighting fan, fisherman, and big game hunter might have enjoyed switching gender roles in bed with one of his wives.Fitzgerald comes off as one who excelled in being pathetic, a man who suffered desperately with his wife, Zelda, alcohol, and simply living large. Berg gives us a tender portrait of Perkins's greatest find.As with all excellent biographies, Max Perkins: Editor of Genius examines only what made Perkins who he was: the editor of the twentieth century. Perkins preferred to sit on the sidelines, championing his authors. Often, he sits on the sidelines in this book as well, but this only makes sense: he was famous for his work with his more famous authors. It wasn't Max, it was his interaction with these great authors that made him all great.As some reviewers have pointed out, Max would have enjoyed thsi book.

An Excellent Biography Of A Real Hero of Literature

Published by Thriftbooks.com User , 21 years ago
I had a hardcover copy of this book for years, and I let it get away from me. When I found the paperback, I jumped on it and devoured it. What a wonderful friend and editor Perkins was! He had the unerring sense of knowing HOW a story (novels or biographies) should be well-told. A. Scott Berg seems to have followed his advice to the letter. I'm looking forward to reading Berg's other biographies.

A brilliant biography of a literary hero.

Published by Thriftbooks.com User , 22 years ago
Max Perkins was the conductor of the most outstanding literary orchestra ever assembled. He orchestrated each players performance into a sound of America that still plays. The players were from all segments of our society, male, female, protestant, catholic, mid-west, south,east coast, loners, extroverts, introverts, warriors, lovers; a spectrum of background, all from whom Max Perkins could whittle out classic literature. His love of writing and writers was his primary concern; financial success of the book, while important, was not his ultimate priority. There were times he allowed writers to get books out of their system, which he believed might not be successful, because he knew that the writer had to get by that story before they could write their best work. Intuition yes, but absolute understanding of each writers strengths and weaknesses. He gave himself to writing and our country's literary legacy reached it's summit with his stable of writing talents. A.Scott Berg in his own way has written a classic biography about a classic editor who edited classic writers. It was the golden age of writing and editing, a time before television and sales completely dominated the art of language expression.

Published by Thriftbooks.com User , 23 years ago
If you are an admirer of F.Scott Fitzgerald, Ring Lardner, Thomas Wolfe, Earnest Hemingway, Marjorie Rawlings; basically any significant American writer of fiction during the first half of this century--buy the book. Here's how I would put it: If those authors could send ONE, just one posthumous request for you to purchase a particular book, "Perkins: Editor of Genius" would be my sincerely expected choice. Why? Because he wasn't just the "editor of genius": he was their friend. Maybe in some cases like Mr. Wolfe's, the only REAL friend of a lifetime. Fitzgerald wrote in his last years, " Max, you are the only person who has never lost faith in me." Even after Scott Fitzgerald's too short existence, Max was a warrior for a reputation which he confidently predicted would survive the fads of that time. This is a study for those of us who can only regret never meeting him, a study in accepting the short-comings of others with understanding; and demanding the best from ourselves. Words are cheapened by their use in describing Max, because their cousins are seen so often where the object is so less deserving, but buy the book. Mr Berg paints a wonderous, living picture, whose thousand words I believe venerable Perkins would have approved--if somewhat sheepishly.
Trustpilot
Copyright © 2022 Thriftbooks.com Terms of Use | Privacy Policy | Do Not Sell My Personal Information | Accessibility Statement
ThriftBooks® and the ThriftBooks® logo are registered trademarks of Thrift Books Global, LLC