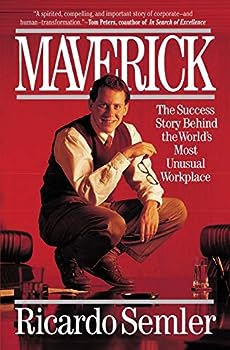 Maverick: The Success Story Behind the World's Most Unusual Workplace

A Brazilian executive's success story describes how he turned around an aging, stagnant company that defied recession, strikes, and inflation by eliminating nine layers of management and instilling... This description may be from another edition of this product.

Profound Lessons about Work and Life

Published by Thriftbooks.com User , 15 years ago
Maverick, written by Ricardo Semler, is one of the most powerful and inspiring books I've ever read. It takes the idea of participative management to new levels and demonstrates, through the evolution of his company, Semco, that a completely new way of working is possible, a way in which workers decide when and where they work, who gets hired, and how much they get paid. And it gives a vivid account of Semco's story so that we see the way of life and hear the voices of the people who created it. Clearly, the ideas in the book didn't come out of a vacuum. Semler read and studied widely, building on the ideas of people like Robert Townsend and Peter Drucker. But he has elaborated and improvised on those ideas to create an entirely unique, collaborative work culture at Semco in São Paulo, Brazil, that he has then sustained over a period of 25 years. Astonishing! Semler inspired me to look at some of his sources like Robert Townsend's 1970 book, "Up the Organization," a similarly contrarian and original creation. Semler shares a kindred spirit with Townsend and his book is just as entertaining, and as concise and full of important ideas about governance and leadership. Townsend calls his style of management "Participative Management" and puts into practice many of the principles from Douglas McGregor's Theory Y (as proposed in his 1960 book, Human Side of Management). But whereas Townsend simply orders his ideas alphabetically, Semler's book is organized chronologically. Each of its thirty six chapters tells a story from the history of Semco, and each contains at least one important lesson. At the end of the book, as if in homage to Townsend, Semler encapsulates all his key ideas in what he calls his ABC's, which includes an alphabetic glossary of management ideas, as well as his ideas for time management and his "Survival Manual," which is given to new hires at Semco and contains just twenty-one cartoons illustrating its governing principles -- amplified by just one or two sentences -- that constitute Semco's only policy manual or rule book. Just to give you a flavor of "Maverick", here is the story from one chapter, in which Semco gives up control to energize the workforce. "By the middle of 1984 we were...ready to buy another company," starts Semler. "Hobart Brazil's Ipiranga plant, near São Paulo, had a long but less than glorious legacy, endured by a weary band of employees, some of whom had invested as many as forty-five years there." Some months after the acquisition, Fernando Lotamorro, who was Semco's executive in charge of operations, became convinced that the Hobart plant lacked organization, ambition, and controls and insisted that some action should be taken. As Semler relates, "Clovis [Bojikian] and I discussed it often and, in the end, agreed with Fernando. We were worried about his hard-edged style and lack of experience as a general manager. But Fernando had the aggressive personality that we then believed a successful business

Published by Thriftbooks.com User , 16 years ago
Shortly after Ricardo Semler took over Semco, his family's moribund manufacturing business, employees began referring to him as Dr. Dickie. In the context of a hardened and confrontational union work environment, this nickname signaled the changes that were about to come. Maverick tells the story of the transformation of Semco into a radical and high performing organization. Here's a sampling of Dr. Dickie's good ideas... * Make each business unit small enough so that those involved understand everything that is going on and can influence the outcomes. * Implement a rounded pyramid organization structure with floating coordinators. Coordinators are the only supervisory level and are all at the same organizational level but different pay rates. * Demonstrate trust by eliminating symbols of corporate oppression as well as the perks of status. * Share all information and eliminate secrets. You can't expect involvement to flourish without an abundance of information available to all employees. * Every six months bosses are evaluated by their subordinates and the results are posted. * Salaries are public information unless the employee requests that they not be published. * Allow employees to set their own salary. Consider these criteria: what they think they can make elsewhere; what others with similar skills and responsibilities make in the Company; what friends with similar backgrounds make; how much they need to live on. * Share 23% of pretax profits. Employees vote how the pool will be split. They must vote to determine the manner of each quarterly distribution. In practice they always vote for equal dollar shares. * Substitute the survival manual for thick procedure manuals. Eliminate policies and rules wherever possible. * Job rotation; 20% of managers shift jobs each year. * Set up workers in their own businesses as suppliers to the company. * Eliminate the wearing of wristwatches whenever and wherever possible. It is impossible to understand life in all its hugeness and complexity if one is constantly consulting a minute counter. * Either you can create complex systems so as to manage complexity, or you can simplify everything. My company used Maverick as assigned reading for a management retreat some years ago. The result was a change of direction that it's hard to imagine would have been arrived at otherwise. Highly recommended for those open to having their organizational paradigms shifted.

Published by Thriftbooks.com User , 16 years ago
Semler recounts the evolution of his family's company, Semco, from being a paternalistic, strictly hierarchical one, when he takes over the reins from his father, to a company like no other. The book reads like an autobiography, and it is, but only with the focus on the transformation of Semco and how Semler and his colleagues evolved through it. The reader is escorted through the many gestation periods of Semler's organizational theories. It's an amazing trip that you can hardly believe took place. Instead of paraphrasing Semler here I want to use a pretty long quote from one of the last pages of the book. There Semler has such a succinct description of his core theories and the way he put them into practice that I feel his words summarize the plot of this book far better than I ever could: "To survive in modern times, a company must have an organizational structure that accepts change as its basic premise, lets tribal customs thrive, and fosters a power that is derived from respect, not rules. In other words, the successful companies will be the ones that put quality of life first. Do this and the rest - quality of product, productivity of workers, profits for all - will follow. At Semco we did away with strictures that dictate the "hows" and created fertile soil for differences. We gave people an opportunity to test, question, and disagree. We let them determine their own futures. We let them come and go as they wanted, work at home if they wished, set their own salaries, choose their own bosses. We let them change their minds and ours, prove us wrong when we are wrong, make us humbler. Such a system relishes change, which is the only antidote to the corporate brainwashing that has consigned giant businesses with brilliant pasts to uncertain futures." I truly enjoyed every page of this book and I highly recommend it.

Published by Thriftbooks.com User , 21 years ago
This is one of the finest gifts I have ever received in my life, and from one of the finest gentlemen I have known so far!A wonderful book to read and an insightful journey into the entrepreneurial experience of a man who is not only a good leader but a wonderful human being too - Ricardo Semler. It is really difficult to carry business and personal life on the same track and yet not mix them together. This was exactly what Mr. Semler has done to his business making sure his employees get benefited too. There are a lot of multinationals working somewhat on the thoughts and ideas of Mr. Semler but no company achieved the status that Semco enjoys. A company where all human values are respected, where workers are not questioned, where there are no set times to enter office, where there are no dress codes, where employees decide there own salaries, where adults are treated like adults and given the respect they deserve - that is what Semco is all about. There are unions of workers almost in all organizations - and they are in Semco too, but with a difference. The rules set for unions are absolutely humanistic and makes sure that the decisions of Unions are respected too. This we see in action when the union goes on strike. The rules Semco follows are somewhat different from other companies. These are as follows: -1. Treats everyone as adults 2. Tell the strikers that no one will be punished when they return to work. Then don't punish anyone. 3. Don't keep records of who came to work and who led the walkout. 4. Never call the police or try to break up a picket line. 5. Maintain all benefits. 6. Don't block worker's access to the factory, or the access of union representatives to the workers. But insist that union leaders respect the decision of those who want to work, just as the company respects the decision of those who don't. 7. Don't fire anyone during or after the strike, but make everyone see that a walkout is an act of aggressiveness.This is just one example - there are a lot of other things, which makes Semco a real Masterpiece. Semco is a smorgasbord that signifies all possible qualities of a successful business with complete humane values incorporated in its decision-making.I would suggest this book to every senior personnel in any industrial set-up, to every entrepreneur, to every management student, and to all those who love to read real management and successful stories.This is in deed a great book and I would suggest it as a must read for even those who are not related to business, because it also teaches the humanistic side of any company whatsoever the business conditions are.A must read for anybody who loves to read.Happy reading!

Published by Thriftbooks.com User , 23 years ago
As a management consultant I found this book very useful indeed - much of it is directly applicable to shop-floor and pressure-politics situations - the 20-page cartoon "rulebook" at the end is more than worth the price of the book itself - buy it! And if you have the guts, apply what it says, too: It's been known for some time that organizations are designed according to "command and control" principles that very poorly match how humans are really built to behave. More complex self-ordering behavior is always observed when any lack of hierarchy exists, and the hierarchies that do emerge tend to be more effective than those that were designed by managers with experience in previous eras. Semler just chose to trust it more than, say, Tom Peters. Prof. Nicholson, head of London Business School recently wrote (in the Harvard Business Review) that Semler's model was the only one to really respect "stone age nature" of human behavior (the many insights from evolutionary psychology that tell us that we're far more often feeling our way through decisions than thinking our way through).Workplace democracy is not an "experiment" nor a threat to productivity, it's a working fact in a hundred mature industries in a dozen countries - we have applied Semler's principles to systems integration, software development, finance, etc., and his experience is well worth spending a few hours on.
Trustpilot
Copyright © 2022 Thriftbooks.com Terms of Use | Privacy Policy | Do Not Sell My Personal Information | Accessibility Statement
ThriftBooks® and the ThriftBooks® logo are registered trademarks of Thrift Books Global, LLC