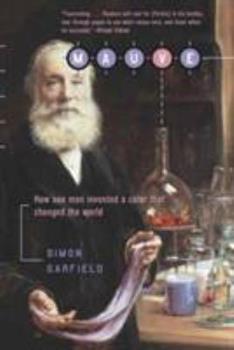 Mauve: How One Man Invented a Color That Changed the World

"By bringing Perkin into the open and documenting his life and work, Garfield has done a service to history."-- Chicago Tribune " A]n inviting cocktail of Perkin biography, account of the dye industry and where it led, and social and cultural history up to the present."-- American Scientist "Garfield leaps gracefully back and forth in time, as comfortable in the Victorian past as he is in the brave new world of petrochemicals and biochemistry."--...

Published by Thriftbooks.com User , 12 years ago
It is a perfect book for you. It is small, it is great reading,it is entertaining and it will open your mind on the world of inventions behind the color of a dress.

A Favorite History of Science Book

Published by Thriftbooks.com User , 13 years ago
I understand everyone has his or her own definition of great writing and a great book. I thought this book was quite well-written and I enjoyed that it was not limited to merely a biography of William Perkin or the chronological format. As far as explaining my definition of a well-written book, I would say that this qualifies mostly because it captures interest quickly and maintains it. It is a non-fiction page-turner! Additionally, the author does not make grammatical errors or use language or style which is difficult to understand. In my opinion, that is a well-written book. As far as content is concerned, there is so much that can be gleaned from reading this quite fun as well as informative book. I especially liked the parts on Germany and WWII. As a graduate student, I would almost certainly assign this to a History of Science class. It would be great for a topics class focusing on discoveries/inventions or chemistry. I read this purely for pleasure and as such would recommend it to any general reader interested in the history of science, invention or world history.

Published by Thriftbooks.com User , 19 years ago
This is a fantastic accounting of a too little glorified period in the development of organic chemistry. The story will be inspiring to anyone who has an interest in chemistry and/or business. The latter because the story demonstrates the importance of recognizing and capitalizing on an unexpected invention (vs. more target-oriented discovery).Unlike, most other popular science-related books that this is likely to be lumped with, it is enjoyably written, well researched and full of fascinating facts.

What a Colorful Story!

Published by Thriftbooks.com User , 20 years ago
In 1859 there was a real mania for the color mauve, because it had been invented only three years before. Of course the color had not truly been invented, but people then just started seeing lots of it because the process of dyeing using the color had been invented. The inventor, an Englishman named William Perkin, was someone who achieved a good deal of fame in his time, but is now largely forgotten. _Mauve: How One Man Invented a Color That Changed the World_ (W. W. Norton) by Simon Garfield aims to bring him back to our memories, and in a lucid and enjoyable way, manages just that.Perkin's revolution was to use coal tar derivatives, which had been regarded as useless waste products, to make the first of the aniline dyes; textile dyes before Perkin's day came from "natural sources," and were expensive, unreliable, and subject to fading. Perkin was only eighteen years old when he was tinkering with chemicals, trying to make the antimalarial drug quinine artificially. Perkin was looking for the colorless quinine, but instead produced a reddish powder. It would perhaps have been a sensible decision to scrap what he was working on and try again, but Perkin possessed an admirable curiosity, and further purified the powder to discover the prettiest purple dye anyone had ever seen. Chemists made new colors all the time, so his fellows were horrified that he planned to abandon academic chemistry to go into business, but he decided to go with his entrepreneurial instincts. Garfield describes the grueling duties of the young man trying to make it in a commercial world about which he initially knew little. But mauve took off, becoming the fashionable color, and Perkin's fortune was secure.Perkin was a modest man, whom Garfield obviously admires. When the fiftieth anniversary of mauve came around, he reluctantly accepted a knighthood. It was not for a color, nor for the other colors he invented, nor for the papers he continued to produce for the academic world (usually not about dyes). With the production of the first aniline dye, Garfield demonstrates in his engaging book, it was the start of chemistry anew; the progeny of Perkin's original reactions for fashion now play roles in less superficial arts of medicine, pharmacology, engineering, and more.

Nothing purple about this prose

Published by Thriftbooks.com User , 20 years ago
Simon Garfield has written a fascinating book about the history of something we take utterly for granted, synthetic dyes, how they came about, and how they changed the world of invention. The book focuses on the story of William Perkin, who, as a young man accidentally invents a new kind of dye that does not fade or age the way natural dyes do. From that point on, his challenge is to find a place for his invention in society, and Garfield chronicles admirably the struggles Perkin faced and the impact his struggle had on the field of chemistry, which as a result of this new dye, changes from a field of intellectual scientific research to a field of commercial potential. Garfield's writing is engaging and absorbing, and this is a wonderfully illuminating book.
Copyright © 2020 Thriftbooks.com Terms of Use | Privacy Policy | Do Not Sell My Personal Information | Accessibility Statement
ThriftBooks® and the ThriftBooks® logo are registered trademarks of Thrift Books Global, LLC