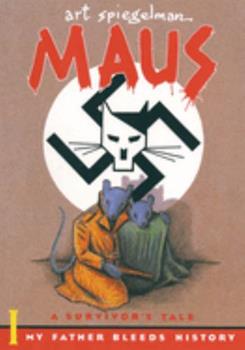 Maus I: A Survivor's Tale: My Father Bleeds History

The first installment of the Pulitzer Prize-winning graphic novel acclaimed as "the most affecting and successful narrative ever done about the Holocaust" ( Wall Street Journal ) and "the first masterpiece in comic book history" ( The New Yorker ). A brutally moving work of art--widely hailed as the greatest graphic novel ever written-- Maus recounts the chilling experiences of the author's father during the Holocaust, with Jews drawn as wide-eyed...

Explanation of the Animal Portrayals

Published by Thriftbooks.com User , 19 years ago
As a history and literature major, I wrote my senior thesis on Maus and Maus II because, after reading them for a class, I couldn't stop thinking about them. The imagery, both drawn and implied, was masterful. Each panel tells the story of the Holocaust as SOMEONE REMEMBERS IT. Spiegelman took his father's story and graphically interpreted it in an incredibly moving way. He did not write a work of historical fact (for whatever those books are worth anyway - even history is a work of memory and interpretation). I love these graphic novels for what they are - brilliant literature and testimony.I was looking over some of these reviews of Maus because I am going to see Spiegelman speak this weekend and just wanted to know what others had said in the past. I was disheartened to read some of the negative responses to the use of animal caricatures, especially since I have always felt this was the most ingenius part of the works. Looking at these reviews, though, I remembered an interview with Spiegelman I read a while back. He explains the animal caricatures a bit, and I thought it might be beneficial to place a quote here, in this forum.Published in The Comics Journal, October 1991:Spiegelman says of the animal portrayals, "These images are not my images. I borrowed them from the Germans. At a certain point I wanted to go to Poland, and I had to get a visa. I put in my application, and then I got a call from the consul. He said 'the Polish attache wants to speak with you.' And I knew what he wanted to talk to me about. On the way over there, I tried to figure out what I was going to say to him. 'I wanted to draw noble stallions, but I don't do horses very well?' When I got there, he gave me the perfect opening. He said, 'You know, the Nazis called us schwein' (German for pig). And I said, 'Yes, and they called us vermin (German for mouse or rat).' Ultimately, what the book is about is the commonality of human beings. It's crazy to divide things down the nationalistic or racial or religious lines. And that's the whole point, isn't it? These metaphors, which are meant to self-destruct in my book - and I think they do self-destruct - still have a residual force that allows them to work as metaphors, and still get people worked up over them."I guess he's right. People do get worked up over the metaphors. Too bad some of those people can't understand them. If you haven't read Maus, you are missing a true piece of art.

Ignore the ramblings of the PC watchdog reviewers.

Published by Thriftbooks.com User , 20 years ago
First of all, if you've read or are reading the other reviews, ignore the blather about how the whole "Animal Farm" metaphor--Jews as mice, Germans as cats, etc..--being racist and demeaning.Art Spiegelman attempts to tell the story of his father Vladek's life in Hitler's Europe. By and large, the book is a detailed, objective retelling of his Vladek's story. However, as Art himself will realize, "I can't even make sense out of my relationship with my father--how am I supposed to make sense out of the Holocaust?" and "Reality is much too complex for comics--so much has to be left out or distorted." Thus liberated from the impossible standard of complete objectivity, Art is free to insert two important subjective elements into the story--the depiction of different races as different species, and the insertion of himself as a character in MAUS.Obviously, Art is not a overt racist--in fact, in the second part of MAUS, Art will scold his father for distrusting a black person, and a German-Jewish couple will help Vladek return home after being freed from the death camps. The point of portraying Jews as mice, Germans as cats, Poles as pigs, etc. is to show what race relations during Hitler's Europe might have been like.The characterization of race doesn't end there, though--as the scene shifts from Nazi Germany to the present, and as Art must suffer the daily trials and tribulations of life with a father permanently scarred by his experiences, Art depicts himself as a mouse as well, a confession that he himself is unable to completely escape the aftermath of the poisoned race relations of the Holocaust. Maybe this makes him a covert racist. But if he is, then who isn't?Art's involvement in MAUS goes beyond interviewing his father, though. Later in the story we will see that Art was treated in a mental hospital and sees a psychiatrist regularly. As the book cover declares, "MAUS is a story about the survivors of the Holocaust--and of the children who somehow survive the survivors."The storytelling in MAUS is stellar, and the craftsmanship is as well. The comics medium allows Spiegelman to employ some interesting tricks. For example, whenever Vladek is trying to sneak around, he is portrayed with a pig mask. When Vladek and Anja are trying to escape from the ghetto, Anja, who in real life was easily identifiable as a Jew by her appearance, is drawn with a long tail, while Vladek is not.In sum, MAUS is a gripping story of his parents' experience during the Holocaust, filled with countless brushes with death, tales of betrayal, and plenty of terrible, graphic illustrations of victims being executed. It is not a history text in the most austere and empirical sense. Rather, it is a confession that the Holocaust defies dispassionate and detached analysis.

Of Mice and Men

Published by Thriftbooks.com User , 20 years ago
I first read Maus in a college bookstore in Auckland, New Zealand. I was searching for a textbook and came across the first volume of Speigelman's 2-part series completely by accident. Feeling somewhat nervous about a comic that portrays Jews as mice and Nazis as cats, I nevertheless picked it up. Two hours later, I was standing in exactly the same spot, oblivious even to the bookstore clerks who were trying to shoo me out. I was riveted, disturbed and moved by this incredible piece of literature. Maus is by turns informative, evocative, funny and brutally honest as an account of how one man dealt with the "feckless thuggery" of history.When one compares Maus (vols. 1 and 2) with all the heroic nostalgia surrounding World War 2 that is coming out in popular culture these days, one is immediately struck by some interesting contrasts. In movies such as Saving Private Ryan, the filmmakers and audiences all emphasize the visual accuracy or "feel" as paramount. However, if we leave aside the grand patriotic narratives and the bloody violence, there is very little left. We are not really shown what the effects of the war actually were on people's lives. Realism, it appears is limited to the battlefield.Maus on the other hand, makes no claims to visual realism. This is in fact the strength (as others have pointed out) of Spiegelman's approach to the complex, multi-layered subject of his father's experiences as a Holocaust survivor. By making the surface of the narrative explicitly transparent, Spiegelman can take us deeper into the tangled and haunted inner worlds of both Vladek and Art himself without the distractions of "visual accuracy". By using the comic medium, Speigelman can actually present multiple story lines and conflicting accounts without sacrificing their emotional impact. His treatment of discrepancies between his father's memories of Auschwitz and those of other prisoners regarding the famous orchestra at the gates, is one excellent example. His depictions of Jews as mice, Poles as pigs and Germans as cats are another exzample of masterful condensation of meaning, bring up volumes of deep background with nary a word written. Some of this is made a little more explicit in Maus II where a reporter asks Speigelman how he would draw Israeli Jews and he replies "I have no idea ... porcupines?" It's this kind of self-awareness that makes Maus a masterpiece on many different levels.Make no mistake however, for all its "non-realism", Speigelman's depictions of starving, panic-stricken prisoners packed into cattle-cars or the piles of dead and dying are no less brutally evocative than the photographs taken by Allied cameramen on the liberation of the camps. His eye and hand are brilliant, his ear and pen unsparing in his depiction of history, himself and his father. I just read an article in the New Yorker regarding Lt. Colonel James Thompson, who was the longest-held US POW in Vietnam. One of his psychiatrists describes Thom

Published by Thriftbooks.com User , 21 years ago
Don't let the comic-book type format fool you: Maus is the horrifying biography of a man who survived(?) the greatest atrocities the 20th Century had to offer. Mr. Spiegelman makes great use of the illustrated book format to allow the reader to meet the Jewish experience under WWII Naziism without rejecting it. Words of caution to any reader: leave yourself enough time to finish the entire volume at once, because you won't want to put it down, and leave yourself time afterward to come to terms with what you have read. I also recommend waiting at least a day or two between this volume and its sequel (Maus II) to avoid overload; Maus is the most powerful, most haunting, and most accessible statement I have encountered on the horrors of the holocaust.

Published by Thriftbooks.com User , 21 years ago
Maus is one of the most amazing comic stories I have ever read. It is so horrifying and so human, yet it never becomes overly depressing and is lightened somewhat by the fact that all the characters are animals. The story is a brilliant mix of Art Spiegelman writing the story itself and trying to come to terms with his father, and his father's harrowing experiences at the height of Nazi power in Europe and in the concentration camp at Auschwitz (although the concentration camp part takes place in the second volume).This volume of Maus is mostly about Vladek trying to avoid the Nazis, as all the Jews in Europe were trying to do at this time. There are many colorful characters and stories packed into Maus, and it is a grim reminder of a dark period of world history. Beware though . . . the second edition (And Here My Troubles Began) is even more horrifying.Maus is brilliant. Buy this and the second part too - there is no way you'll regret it.

Maus: A Survivor's Tale : My Father Bleeds History Mentions in Our Blog 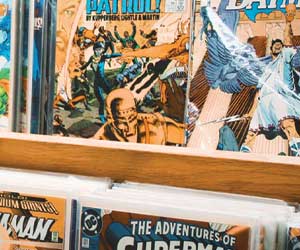