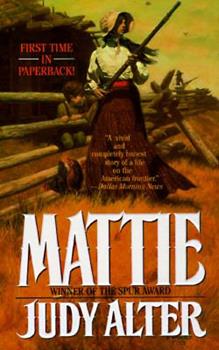 Poor and illegitimate, young Mattie was introduced to the world of medicine when she was hired by an enfluential doctor to care for his daughter. By sheer determination, she grows up to become a doctor herself and sets up her practice amid the soddies and farmhouses of Nebraska. During the years of Mattie's practice, her life is filled with battles won and loved ones lost, challenges met and opportunities passed. This novel offers a portrait of life...

Published by Thriftbooks.com User , 18 years ago
Mattie means hard working, dedicated, caring and a wonderfull story. you will cry, be happy and when the story ends wish it would go on. a great book, one i will read over and over.

Published by Thriftbooks.com User , 19 years ago
In outline this book sounds like the soporific and anodyne TV series "Dr Quinn,Medicine Woman",starring the egregious Jane Seymour,trying, but failing ,to compete with the brass rubbings in my local church when it comes to expressive flexibility.Mercifully,this Spur Award winner from 1988 is an altogether tougher and more honest piece of work,and made me regret even more than I do that more of its author's books are not available within the UKMattie Armstrong is a plain ,but determined and intelligent child labouring under the twin disdvantages of poverty and illegitimacy but she becomes the protege of the local doctor and when her mother and brother move West she remains behind and becomes a resident in his household as companion to his young daughter and nurse to his mentally ailing wifeOn the death of his wife the doctor proposes marriage and following her refusal Mattie travels West to take up a post as the one and only doctor for miles aroundThe bulk of the book deals with the travails and pleasures of such a life----the long travels across open prairie,the hardscrabble existence of dwellers on the frontier,the triumphs and sorrows.There is an unsuitable marriage to a feckless and abusive husband,a manipulative minx of a daughter and finally the reflections on a life turned full circle as she becomes the patron of an aspiring doctor,born ,like Mattie before him,in less than propitious circumstancesIts an unsentimental and deeply felt book that I recommend unhesitatingly and is amomg the few I could have wished longer as it does feel slightly rushed at times.I did wonder if publisher pressure had resulted in some cutting down of the book so as to conform to the then norm for the genreThe early sections ,which closely parallel"Jane Eyre"are the best but the whole enterprise is executed with polish and professionalismEven if the Western is not your customary cup of literary tea I suggest you track it down and try an honest,non-formulaic example of the genreThe chronicle of a life well lived ,and based on an actual character,its a positive and rewarding experience even genre avoiders will find appealing
Copyright © 2020 Thriftbooks.com Terms of Use | Privacy Policy | Do Not Sell My Personal Information | Accessibility Statement
ThriftBooks® and the ThriftBooks® logo are registered trademarks of Thrift Books Global, LLC