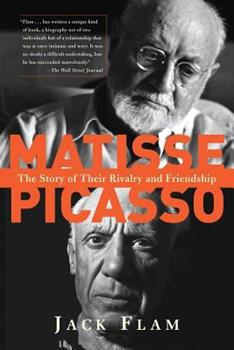 Matisse and Picasso: The Story of Their Rivalry and Friendship

Matisse and Picasso achieved extraordinary prominence during their lifetimes. They have become cultural icons, standing not only for different kinds of art but also for different ways of living. Matisse, known for his restraint and intense sense of privacy, for his decorum and discretion, created an art that transcended daily life and conveyed a sensuality that inhabited an abstract and ethereal realm of being. In contrast, Picasso became the exemplar...

Must read for Art lovers!!!

Published by Thriftbooks.com User , 16 years ago
This is an excellent book. I am thoroughly enjoying it. This book compares great painters 'Henri Matisse' and 'Pablo Picasso' works and the influence of each other and their works on the others art. Henri Matisse with his keeping the painting simple and lively and Picasso with his cubism, drawing from imagination are 'artists of different worlds'. They have different painting styles and they paint at exactly opposite times. The book goes through the works of each in the order one was done as a reacton to the other, sometimes one trying to beat the other at their own style. CITES: Baudelaire's essay- 'The Painter of Modern Life'. Apollinaire's essay on Picasso's work.(also his 'La Poete assasine') Picasso's play - 'Desire caught by the tail'. Matisse - 'Notes of a Painter'.

Published by Thriftbooks.com User , 18 years ago
Imagine one tightly written book that can tell you what the art world was like for much of the 20th Century! Jack Flam is the man who did just that in "Matisse Picaso." Then imagine learning all about the lives of Matisse and Picasso and their loves along with their push-pull friendship and competition. After that get the skinny on the paintings both men painted. I never even saw all the -------- in Picasso's paintings. Now, it is hard to see anything else. I found this book to be much more exciting then typical biographies that include all the boring parts of people's lives. Here you get all the interesting parts with all the boring parts left out. I read every word and recommend the book without reservation. In fact, I believe every art student needs to read this book, every artist, every art affictionado.

Published by Thriftbooks.com User , 19 years ago
If this be gossip, then it is the best kind. Engaging account of the rivalry/synergy of Matisse and Picasso and the interactions over half a century, with a Gertrude Stein introit at the beginning. This competition is fairly lightweight stuff as far as I can see although throwing rubber suction darts at a Matisse painting gets close to borderline rascalian--Picasso probably loses points on adolescent misdemeanours, but the art of both leaves us unable to judge, save that a third here could not be found.

Matisse and Picasso by Flam

Published by Thriftbooks.com User , 19 years ago
This is an excellent work for art history enthusiasts. It depictsmany famous works of art by Matisse and Picasso. Classically,Matisse is known for the artful use of color; whereas, Picassois credited with the unique form of Cubism which pervadeshis artwork. Flam depicts important works by both artists.For instance, Matisse's "The Woman With The Hat" is shown infull color. Picasso's "The Acrobat's Family" is depictedtogether with "The Two Nudes". These pictures show the emotional side of Picasso's work in contradistinction toMatisse's exercise of restraint. This book would make aperfect gift for a friend, relative or art buff.

Published by Thriftbooks.com User , 19 years ago
Before there was Andy Warhol, the ultimate in art cool, there was Picasso. And before there was Picasso, there was Matisse. Picasso and his cronies used to make fun of Matisse's primitive style and threw fake darts at Matisse's portrait of his daughter, and people laughed in the salons at Matisse's Joy of Life but no artist influenced Picasso more than Matisse, from his works to his introduction to African and Iberian art, Matisse was one of the few constants in Picasso's life, always keeping the paintings that he had of Matisse. These two heavyweights, more than anybody, have influenced the way we make art today. This books does a great job fleshing out the relationship between these two artists and how they affected each other in a well written and highly accesible format. An excellent book worthy of the excellent artists.
Trustpilot
Copyright © 2022 Thriftbooks.com Terms of Use | Privacy Policy | Do Not Sell or Share My Personal Information | Accessibility Statement
ThriftBooks® and the ThriftBooks® logo are registered trademarks of Thrift Books Global, LLC