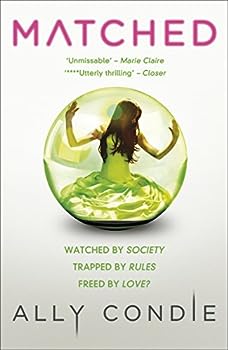 (Book #1 in the Matched Series)

"[A] superb dystopian romance." - The Wall Street Journal. "Strong feminist ideals and impressive writing that's bound to captivate." - The Los Angeles Times. This New York Times bestseller is perfect for fans of 1984, Brave New World, Black Mirror, and The Handmaid's Tale. In the Society, Officials decide. Who you love. Where you work. When you die. Cassia has always trusted the Society's choices. And when her best friend appears on the Matching...

This author is amazing!!

Published by Elsie VanDyke , 6 months ago
Ally Condie used to be an English teacher and it shows. While her characters aren’t very deep you will still get caught up in the decisions they need to make and the problems they have to face. This quick paced story line makes up tenfold for any of its mistakes.

Literally Such a Steal!!!

Published by G , 1 year ago
I love this package because I literally selected paperback for 3 bucks and surprisingly instead it came in an amazingly new hardcover copy. There was no damage at all and it looked brand new.

I bought this book after remembering reading it in high school

Published by Jessica , 1 year ago
I have always loved fiction books, especially the utopian/dystopian type and it took me a while to find the name because I could only remember small details of what happened in the book. I love the story itself, the only problem was I ordered the hardcover, but received the paperback. It's not a big deal, it's just that I ordered the hardcover because I'm not very gentle with my books and its gonna be hard to keep the paperback in decent shape

Published by Amy Shearer , 1 year ago
She loves the series.

Published by Jamie , 3 years ago
Introduced to the Society, where people are told where to work, who to love, and how long to live, it is reminiscent of a teenage version of 1984 with more pogniant romance. Classic of dystopian fiction, there is a love triangle, however Cassia's reaction to the possibility of daring to be different and daring to choose for herself is a great awakening akin to Lois Lowry's The Giver.

This book is so good!

Published by brit , 3 years ago
A story about what the world could look like after our current society fails. Very interesting and a great read. I could not put it down!

Published by Thriftbooks.com User , 4 years ago
I do not typically read series books and I read all 3 of these. It kept you wanting to know what was going to happen and how things would end. It well written and the plot keeps you interested.

A Dystopian love story for teens...

Published by Thriftbooks.com User , 11 years ago
This was a well written book, similar in setting to books like The Giver (Lois Lowry) and The Hunger Games (Suzanne Collins), but it will also appeal to fans of books like Twilight, with a love story as the central theme. The main character, Cassia, is a more mature teenager than Bella (Twilight), however. She is living in a very controlled, futuristic society, where their future spouses are chosen for them, based on their shared characteristics (sounds like a website, doesn't it?). However, they have no choice in the matter whatsoever. There are "aberrations"; persons in the society that are given an infraction due to some breakage of the rules, but are still allowed to live among others. And then there are "anomalies"; outcasts due to things they have done or through being linked to someone who has done something. Cassia is a very normal member of this society, until she falls for a character who is an aberration in this society, and certainly not an approved "match". My daughters (ages 13 and 15) really enjoyed this novel. I was reminded of adult novels like The Handmaid's Tale (Margaret Atwood) and Never Let Me Go (Kazuo Ishiguro). We all found the novel lacking a little in some descriptive elements. The characters don't seem very observant of their surroundings, but it was sometimes hard to tell if that was how they are meant to be, due to the constraints put upon them by their society, or just the author's lack of description. Definitely a good read, and will appeal to a wide variety of teen readers, and adults as well.

Published by Thriftbooks.com User , 11 years ago
The Society is good. It offers residents a long life free from illness and woe. Citizens are matched with a job suited to their individual aptitudes and a spouse who is compatible in every way. On her seventeenth birthday, Cassia Reyes is pleased to be matched with her childhood friend Xander. But as she views the microcard containing information about her match, she sees an image of Ky, a reserved boy from the Outer Provinces. Although she is assured it was just a mistake, Cassia secretly begins to question the wisdom and methods of the Society. I enjoy a good dystopian story - and this book certainly qualifies. I was hooked from the very first page. Ally Condie tells her story with an understated elegance. There is a simple eloquence to her writing, a sparse, almost poetic quality that speaks to deeper parts of the soul. As I was reading, I often paused to ponder one of the many philosophical questions the book raised in my mind. Don't get me wrong. This isn't just a theoretical exercise; there is plenty of story here -- a bit of romance, a bit of mystery, a bit of suspense. Our heroine might not be running about or brandishing a weapon, but she does fight an internal battle as she tries to reconcile the Society's image of perfection with the cracks she sees all around her. Although this book is touted as a love story, it is mercifully free from the hyper-emotionalism of many young adult romances. Instead, the characters interact through a dance of subtle nuances. Ultimately, Matched is far more than just a teenage romance. It's about freedom and making choices and the power of words. I can't wait for the next book in the trilogy.

Published by Thriftbooks.com User , 11 years ago
Matched follows Cassia, a girl living in a Utopian/Dystopian society where everything is predicted and controlled by the government including who they will be mated with for life. Cassia's government mandated match is a lifelong friend of hers but when she plugs her data card in to see his information another face pops up on her screen. Cassia falls for Ky and starts to question the rules of her society. Cassia's dystopian world is more like The Giver than other horrifying dystopian societies that have been popular in recent dystopias such as the Hunger Games. Her society is seemingly perfect but also heavily regimented and controlling. To make things more frustrating everytime Cassia does something that she feels is out of the ordinary one of the officials tells her that she was predicted to act in that way. She's never overtly threatened and there is no risk of bodily harm but there is always a risk of being watched. The romance and love triangle which is heavily featured in the story is sweet. There is a large focus on poetry and art which could encourage younger readers to seek out the poem that Cassia treasures. Age Appropriateness: This is a story that will be enjoyed by the entire YA audience. The story is complicated enough for older readers, yet the romance is set at a distance enough that younger readers will not be put off. The romance is the focus of the story (making this a girly book) along with the importance of poetry and creating things that are original. There is nothing in this novel that would disturb parents. The romance is G rated and there is no substance abuse or violence. The society is disturbing but in a thought provoking way as opposed to one that would give an easily influenced child nightmares.

When life of predictability turns to big mysteries....

Published by Thriftbooks.com User , 11 years ago
This book really is a great start to a very promising series (I HOPE!) In fact my review is based in the assumption that there will be a series, it just can not end here! Don't want to give too many spoilers to ruin the read. There has been a lot of fascinating groundwork laid out here. SOme really great characters in Ky, CAssia, and Xander. The society has been predicting every move everyone makes. Everyone does what they are supposed to do, says what they are supposed to say and wear what they are supposed to wear. They are told who they are supposed to marry and when they are supposed to die. Everything is predicted and figured out for optimum efficiency.. CAssia has her match banquet to find out who is her perfect Match. When she finds out her match and gets the info to take homethere is a "mistake" because it shows her 2 perfect matches. BOth people she knows. One match that is "predictable" and one that isn't. This turns Cassia'a world upside down and starts to open mysteries in what Cassia and others thought was a predictable safe life. This book really is a slower paced book, there is not a lot of action but there is a lot of info laid out for a a series. The author has crafted the world fairly well and this is a great little hook and left me wanting more. This book is like a teaser for a great series!

Published by Thriftbooks.com User , 12 years ago
So I sat up all night reading this book. I didn't want it to end! Waiting for the sequel will be agony. Without too much spoilering, Cassia, a 17 year old girl, lives in a seeming utopia where everything is predetermined for the citizens. Who you marry, where you live, what job you do, even what food you eat and when you eat it. I use the word 'utopia' because at first, everyone seems happy with this. Cassia and her friends are so excited when their matching ceremonies come up and they meet their future spouses for the first time! But slowly as the story unfurls we see that this place is actually a dystopia in disguise. The story is a bit reminiscent of The Hunger Games - Library Edition but those who are expecting an action-packed adventure will be disappointed. (Though I have hopes of more action for the next book.) There is a lot of sitting and talking in this book, not much action. There's a love triangle but it's obvious from the beginning which guy will win out. The characters could have been a little bit more developed. I like them but I don't feel like I know them enough. For these reasons, I'm giving 4 stars instead of 5. For a first book, the author did an excellent job!
Trustpilot
Copyright © 2022 Thriftbooks.com Terms of Use | Privacy Policy | Do Not Sell or Share My Personal Information | Accessibility Statement
ThriftBooks® and the ThriftBooks® logo are registered trademarks of Thrift Books Global, LLC