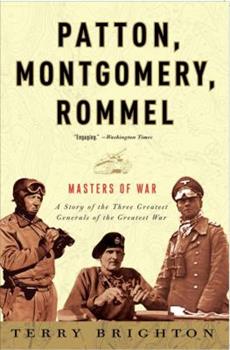 In Patton, Montgomery, Rommel , one of Britain's most accomplished military scholars presents an unprecedented study of the land war in the North African and European theaters, as well as their chief commanders--three men who also happened to be the most compelling dramatis personae of World War II. Beyond spellbinding depictions of pivotal confrontations at El Alamein, Monte Cassino, and the Ardennes forest, author-scholar Terry Brighton illuminates...

For The Students of History And Then Again Not

Published by Thriftbooks.com User , 12 years ago
As a student of history, and specifically military history, this book was a must read for me. I soon learned to also appreciate it from the viewpoint of someone not necessarily "into" this arena. Author Terry Brighton does a superb job of narrating the events that made these three combatants famous without getting bogged down with military maps, movements, and other minute details that so often serve only to turn off those not already inclined to read about war in particular and history in general. Brighton's research and insight into the three personalities are cleverly woven into a work which is worthy of acclaim. Kudos for doing all three men justice and focusing on their known achievements as well as their failures, some known, some not.

Published by Thriftbooks.com User , 12 years ago
Terry Brighton has written a stellar, highly readable, and informative look at three of World War II's top generals. Although I had previously read biographies of Patton and Rommel, I found that the technique of presenting the careers of these three in parallel highly effective and entertaining. The author provides the reader with the pertinent experiences and personality traits that led to the formation of each officer's style of command - Patton and Rommel the masters of speed, audacity and managing the flow of battle, while Montgomery was the master of planning, preparation and persistence. Brighton shows how both styles can, and do, succeed, while they can also result in high casualties if a commander doesn't adjust his style to circumstances. All three of these men were brilliant and flawed, all prima donnas and tireless self-promoters. I found it interesting that in spite of the author's natural British leanings, and occasional excusing of Monty's actions, it is Montgomery that comes off as the least admirable of the three generals, far more selfish and grandstanding to get his own way than either Patton or Rommel. Brighton's work here is an effective study in leadership styles, looking into what makes men such great leaders that they motivate other men to do the near impossible under the trying circumstances of battle. Well worth the read even if you have read previous works about these three great generals.

Published by Thriftbooks.com User , 12 years ago
Terry Brighton's credentials as an historian are impeccable; but his bias as a British writer shows though in his analysis of the 3 foremost generals of WWII; Patton, Montgomery and Rommel. His view of the US forces and command is not a flattering one, he does bring out some of Montgomery's bad traits but the emphasis here is definitely on the British viewpoint, which is not necessarily a bad point but it should definitely be noted in any reading of historical research. However the one detail that I found missing almost completely was almost any mention of air support or the role it played in these general's tactics or plans. There is absolutely no mention of the low level pinpoint bombings of Florence and Rome, avoiding historical monuments and important buildings and the support it gave to the advance northward on the Italian peninsula. There is no mention of the air supplies dropped once the weather cleared in the Battle of the Bulge. I also found the index vague and hard to use. Overlooking these minor points though this book is an excellent source and invaluable resource on these 3 most key generals. The comparisons are outstanding as are the illustrations of how their egos drove the armed forces in war around them. The personal insights and background comparisons and their motivations are well researched and clearly presented. There are quotes from their letters and private papers that lead to much of the understanding. Especially telling are Patton's personal private reactions to the "slapping" incident in Sicily. The discussions and methods and strategies for the fighting that these men led is explained so that even a minor interest in the history of the war would be held and better still understood.

Published by Thriftbooks.com User , 12 years ago
This is a superb book. It consists of mini-biographies of the three principals, in that it takes them from birth to death, but the principal focus is their experience in battle, in WWI but particularly in WWII and the ways in which these three, separate sets of experience intersect. Ultimately, it measures Rommel, Monty and Patton against Clausewitz's principles (as understood and explained by the author). Clausewitz is not so much a normative figure as a touchstone figure. Using him as a standard elucidates the special strengths and limitations of the principals. There are accounts of the major battles of WWII in North Africa and Europe and assessments of the performance (its nature and its degrees of success) of the principals. These assessments are lively, insightful and specific; they strike me as scrupulously fair. Strengths are balanced with shortcomings, even when the shortcomings significantly reduce our admiration of the warriors as men. The book is filled with specific details, anecdotes, quotations and bon mots; these enliven the historical narrative and help bring the characters to life. Side benefit: this book would function effectively as a running commentary on and explication of the major narrative arcs in Franklin Schaffner's film, PATTON. Lovers of the film will truly enjoy this book. The writing is crisp and clear and there is an urgency to the narrative that turns an impressive, ambitious book into a fast read. Don't miss this one. Highly recommended.

I SUGGEST THAT THE EPILOGUE BE READ FIRST

Published by Thriftbooks.com User , 12 years ago
Although, there are many similarities between the three, as far a ego, intellegence, and brashness is concerned. They all had their problems that caused the lengthening of the war, and thus determined what side would win. Let alone each later writing their own version, those that were still alive, being, Montgomery and Eisenhower. But the best part, and what ties them all together is in the Epilogue, and its reference to the book by Carl "von Clausewitz, On War". In a capsule , he says that a smaller group can win a battle against a larger group, if the smaller group has the will, and the larger group doesn't. Now when you read the book you'll have an insight of the why of the wars (story) outcome. And we all know how that went. Right!
Trustpilot
Copyright © 2022 Thriftbooks.com Terms of Use | Privacy Policy | Do Not Sell My Personal Information | Accessibility Statement
ThriftBooks® and the ThriftBooks® logo are registered trademarks of Thrift Books Global, LLC